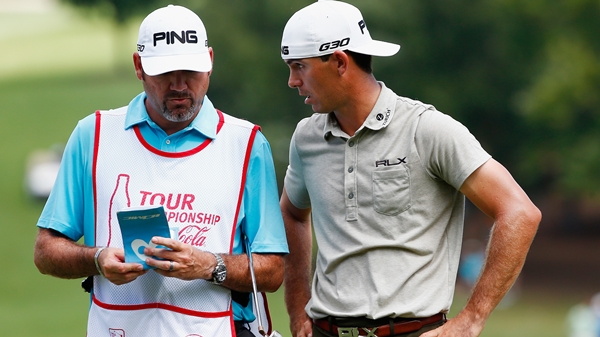 ATLANTA – Billy Horschel showed why he might be the hottest player in golf at the moment with another 4-under 66 on Friday in the Tour Championship. It was his 10th straight round in the 60s. He already has a victory and a runner-up finish in the FedEx Cup playoffs.

And now he gets to take on the best player in golf.

Rory McIlroy rode three big putts and one bizarre break – a tee shot landed in a spectator’s pocket – on his way to a 65 that left him two shots behind and put him in the final group at East Lake going into the homestretch of the FedEx Cup.

At stake for both of them – along with Chris Kirk – is a shot at the $10 million bonus.

“I’m a guy that when I feel good about my game, I’ve got some confidence that I’m going to figure out some way to play well and post a number,” Horschel said.

That he has done.

Horschel is 35 under par in his last 10 rounds. He was runner-up at the Deutsche Bank Championship two weeks ago, when he squandered a shot to at least get into a playoff by chunking a 6-iron into a hazard. And he followed that with a victory in the BMW Championship at Cherry Hills.

McIlroy made his only bogey with a buried lie at the face of a bunker on No. 4, causing him to blast out sideways. He bounced back with birdies, and poured it on at the end of his round with a 12-foot par save, a 20-foot birdie and a 25-foot birdie.

And then there was his par on the 14th, which looked ordinary only on paper. His tee shot drifted right into the pine trees, clattered around and dropped straight down. No one knew where it went until a fan realized it had fallen into the front pocket of his shorts.

PGA Tour rules official Robby Ware made sure the fan had not moved, and McIlroy was given a free drop under Rule 19-1-a.

“I know how sweaty my pockets are. I’m not going into anyone else’s,” McIlroy said. “I need to stop hitting it off line. Things happen there.”

McIlroy was joined by Jason Day, who made bogey on his last hole for a 67; and Kirk, who made two bogeys on the back nine that offset a run of four straight birdies around the turn for a 68.

Kirk, Horschel and McIlroy are among the top five seeds in the FedEx Cup, meaning a victory would guarantee the $10 million bonus.

McIlroy seized the No. 1 ranking by winning the British Open, a World Golf Championship and the PGA Championship in successive starts. He was the top seed going into the FedEx Cup, though because the points are reset for East Lake, the 25-year-old from Northern Ireland always knew it would come down to the Tour Championship.

As much as he wants to end a great year on a high note, McIlroy appears to be playing with no concerns.

“No matter what happens over the weekend, it’s going to be OK,” he said. “But I still want to win this thing.”

McIlroy and Horschel first mixed it up seven years ago when they were amateurs at the Walker Cup. Horschel beat him in singles on the 18th hole, and the next morning teamed with Rickie Fowler in a foursomes win over McIlroy and Jonny Caldwell. Horschel was shouting and pumping fists, as he always does, and it rubbed McIlroy the wrong way. In the final singles session, McIlroy beat him 4 and 2.

That was a long time ago. Neither harbors a grudge.

McIlroy has gone on to win four majors at age 25 – only Woods, Jack Nicklaus and Bobby Jones have done that – while Horschel picked up his second career win last week. They last played together as pros at the Honda Classic this year, where McIlroy had rounds of 66-63 and Horschel missed the cut.

“He’s a good buddy,” Horschel said. “If I happen to come out on top and we’re battling out these next two rounds, that means a lot. The guy won three straight events in a row, and two of them happened to be majors. I think that’s pretty impressive. He’s at that stage where when you’re able to go toe to toe with one of the best players and the No. 1 ranked player in the world and you’re able to come out on top, that gives me a lot of confidence.”