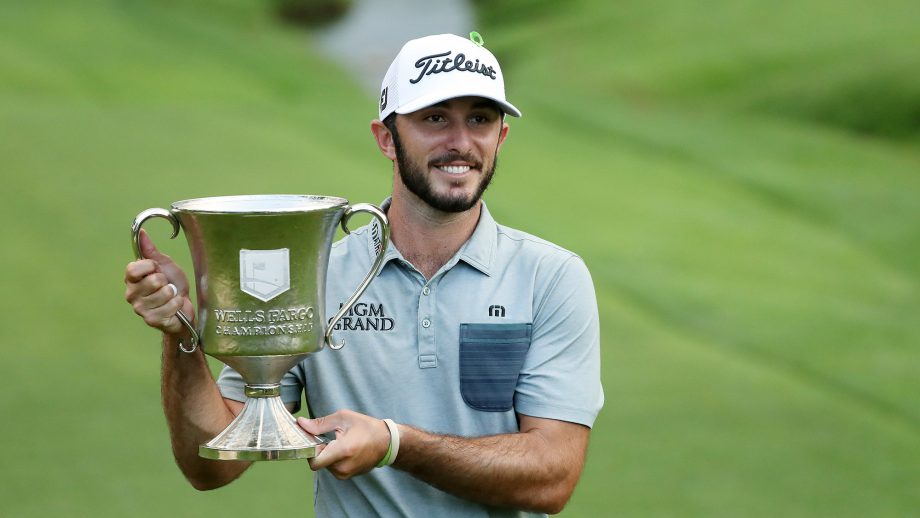 CHARLOTTE, N.C. – Max Homa traded in a shovel for a ladder to get places he always thought he could reach.

Two years ago in his second try on the PGA Tour, he made only two cuts the entire season and played only one round on a Sunday. Eight months ago, he was on the verge of going back to Q-school and an uncertain future until closing with four straight birdies to make the cut in a Web.com Tour event that gave him another shot at the big leagues.

It made Sunday all that much sweeter in the Wells Fargo Championship.

In a three-way tie for the lead, in the final group on the PGA Tour for the first time, with Rory McIlroy, Justin Rose and Sergio Garcia right behind him, Homa outplayed them all with a 4-under 67 for a three-shot victory at Quail Hollow and his first PGA Tour title.

“I used to say when I hit rock bottom I found a shovel and kept digging. I went to some low, low places,” he said. “I’d use a shovel and dig deeper. I went to some low, low places. I realized in that year or two when I started to play bad that my attitude was going to have to get a lot better. … I’m very proud I finally found a ladder and started climbing, because it was getting dark down there.”

Suddenly, the immediate future is bright as can be.

He has a two-year exemption on the PGA Tour, a tee time at the PGA Championship in two weeks at Bethpage Black and a spot in the Masters next year.

A former NCAA champion at Cal, Homa has “Relentless” in block letters tattooed on his right forearm. The 28-year-old Californian also has a signed photo from former Los Angeles Dodgers manager Tommy Lasorda, who once told him to look at the picture and be reminded to believe in himself.

The trophy at his side, Homa’s press conference was interrupted for him to take a call from the 91-year-old Lasorda.

“I guess my whole world is different,” he said.

Golf felt so hard for Homa for so many years after he left Cal, and then he made it look so easy in a final round that made him so nervous he wanted to throw up, except when he had his hands on a golf club. He pulled away with two birdies to start the back nine for a four-shot lead. He didn’t make a bogey until it only affected the final margin. But it was a one-hour rain delay that tested Homa the most.

He was leading by three when he nearly went in the water on the 14th hole and chipped up to 6 feet when the horn sounded to stop play. With time he didn’t need on his hands, he called his fiancee and his coach and can’t remember what either of them said.

And then he returned and buried the putt.

“I knew in the back of my mind if I made that putt, I win this golf tournament,” he said.

Joel Dahmen, who pushed Homa as hard as any major champion, saved par with a tough chip over the creek for a 70 and finished three shots behind.

“I didn’t beat myself today, which was kind of the goal,” Dahmen said. “Max is playing awesome. He’s a good friend. I think we’re going to celebrate tonight.”

Homa effectively sealed it with a perfect play to the green on the par-5 15th for a two-putt birdie, and a 10-foot par putt on the 17th to keep a three-shot leading playing the tough closing hole at Quail Hollow. He made a 10-foot par there, too, and the celebration was on.

“Over the moon, man,” he said before going to sign his card. “It means a lot to do it under pressure, and job security is great. I haven’t had that.”

Justin Rose (68) finished alone in third and moved ahead of Brooks Koepka to No. 2 in the world.

Adam Hadwin of Abbotsford, B.C., was the top Canadian. He shot a final-round 73 to finish 1-under. Fellow Abbotsford native Nick Taylor (72) was 2-over.

Rory McIlroy was primed to join Tom Weiskopf as the only three-time winners at Quail Hollow, starting the final round two shots behind. He never got anything going until it went the wrong way. He turned a 20-foot eagle attempt into a three-putt par on the par-5 seventh, failed to get up-and-down on the reachable eighth for a birdie, and then went bogey-double bogey around the turn to take himself out of the mix.

No one else was much of a threat either, just two guys who had never come remotely close to winning on the PGA Tour.

Former PGA champion Jason Dufner, part of the three-way tie for the lead to start the final round, made consecutive bogeys early and had no bearing on the final round. A double bogey on the 18th gave him a 73 and dropped him into a tie for fourth.

Rose pulled within two shots with a birdie on the par-5 10th, only to settle into a series of pars. By the time Sergio Garcia reached double digits under par, Homa was well on his way.

Homa and Dahmen were at 13 under until Dahmen blinked first. He found a fairway bunker on No. 9, couldn’t get to the green and made bogey and dropped another shot on the 11th. Homa, playing behind him in the final group, holed a 15-foot birdie putt on the 10th for a two-shot lead, made birdie from the left rough on the 11th with a 12-foot putt and escaped more trouble off the tee on the 12th with a two-putt from 80 feet.

He survived the rain delay, the nervy finish.

Homa has endured a lot more than that over the last few years.