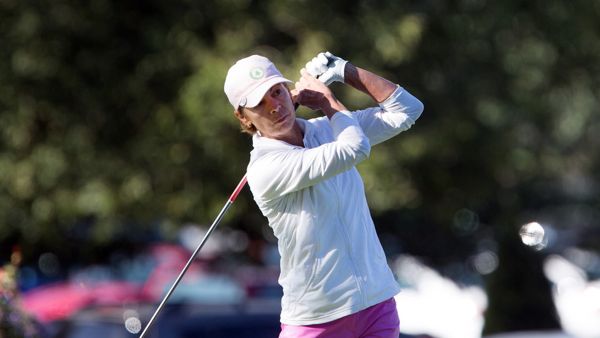 Holly Horwood of Vancouver, B.C., leads the 2013 Royale Cup Canadian Women’s Senior Championship after the first round of action on Tuesday at Spallumcheen Golf and Country Club in Vernon, B.C.

“I’m very happy with how I played today,” said Horwood following her round. “I only missed one putt that I should have made and hit a lot of greens.”

Horwood carded an opening round even-par 71 on Tuesday to take a two-stroke lead heading into the second round.

“Tomorrow I just need to keep it straight and I should be fine,” she continued.

Diane Dolan of Gatineau, Que., Lynda Palahniuk of Kelowna, B.C., and Lisa Smego of Olympia, Wash., are tied for second after firing 2-over 73 in their first rounds.

Two former Royale Cup Canadian Women’s Senior Champions are tied for fifth, as 2013 Canadian Golf Hall of Fame inductee Alison Murdoch of Victoria, B.C., and Jackie Little of Port Alberni, B.C., both posted 3-over 74’s in the opening round.

In the Inter-provincial Team competition, Team British Columbia has a 3-stroke lead over Team Quebec heading into the final round of play with a team score of 5-over 147. Team British Columbia consists of Lynda Palahniuk of Kelowna, B.C., Jackie Little of Port Alberni, B.C., and Karen Pultz of Surrey, B.C. Team Quebec follows in second place at 8-over 150 while Team Ontario rounds out the top three at 12-over 154.

Horwood also leads the Super Senior competition (60+) by two strokes over Palahniuk, with Murdoch following in third. Ginny Marshall of Waterloo, Ont., is in fourth place at 5-over 76, while Jewell Malick of Rockwall, Tex., Joey Bush of Aurora, Ont., and Diane Williams of Calgary, Alta., are tied for fifth at 9-over 80.