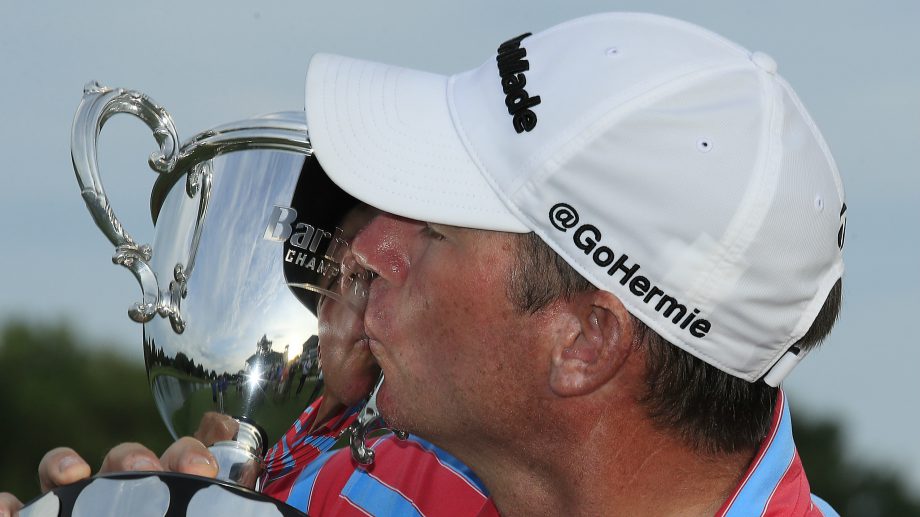 He executed when he had to, too.

“Really proud of how I can step up on that 18th tee when everything’s on the line and hit the fairway and hit the green and get out of there,” Herman said.

Trump’s regular golf partner while working as an assistant professional at Trump National Bedminster in New Jersey, Herman changed to a conventional putting grip and clubhead at the president’s suggestion following a recent round.

Encouraged by Trump more than a decade ago to pursue a playing career, Herman won the 2016 Shell Houston Open for his lone tour title – a victory that also followed a friendly round with Trump.

“I think I need to see him again soon,” the 41-year-old Herman said on the 18th green after his winning tap-in par. “He motivates me and puts me in a good spot.”

Herman finished with a 2-under 70 at Keene Trace in the round interrupted for over three hours because of a thunderstorm with the leaders on the seventh pole. Herman’s putting cooled off after sizzling in opening rounds of 65, 65 and 62.

“Today was just hanging on,” Herman said. “Kelly and I couldn’t find what we had on Saturday…. I was just able to hang on. Kelly played great obviously all week, but I came out on top.”

A shot ahead with three to play, Kraft bogeyed the par-3 16th and par-4 17th. He followed a third-round 61 with a 70 to finish a shot back and squander a chance for his first tour victory.

“I just didn’t have my best stuff today, but I had it going there – made a couple birdies, 14, 15,” Kraft said. “I just gave it to him coming down the stretch, that’s basically all there is to it.”

Herman parred the last three holes to finish at a tournament-record 26-under 262.

“Obviously, with one hole (left) and a one-shot lead, I’ve been in that scenario before, just had to hit a good drive,” Herman said. “You have to step up and give yourself a look at birdie just in case Kelly was going to have a look as well.”

Herman earned a two-year tour exemption and a spot in the PGA Championship, but not in the Masters. He played the last two weeks on past champion status and thought he was headed down to the Korn Ferry Tour.

“My future on tour was not looking too bright coming off a lot of cuts,” Herman said. “I didn’t feel like I was playing poorly, but just putting, short game was not there. Driving, irons has always been there for me, but this week found the touch and here we are.”

The former University of Cincinnati won close to home, giving many family members and friends a chance to watch.

“I’ve never really had a problem with Kentucky, but they beat us in basketball a bunch,” Herman said. “It’s great to win here so close to home. Winning in Houston, didn’t have many people around.”

He was surprised to see wife Caroline and children Abigail and Andrew during the rain delay.

“I’m sitting there with the rain delay and my wife shows up,” Herman said. “We spend most of the summer with her mom and dad in Philadelphia and they drove over this morning. They left at, I don’t know, 4 this morning, so they were confident on what I was doing. …. Didn’t want to waste the opportunity for them.”

He was looking forward to hearing from his golf buddy in the White House.

“I’m sure I’ll be receiving some kind of message,” Herman said. “That was very unexpected to hear from him directly on Friday night. I got a phone call from him wishing me on for the weekend and congratulating me on my first two rounds. It’s pretty amazing I’ve had this relationship with him. I’m very fortunate I get to play a little golf with him.”

Sepp Straka of Austria was a career-best third at 23 under after a 66.

Matt Jones (63) and Austin Cook (70) followed at 22 under. Cook had a tour-record five birdies in the week. There were 114 eagles during the event, the most in a single-course tournament since the tour began tracking the statistic in 1990.