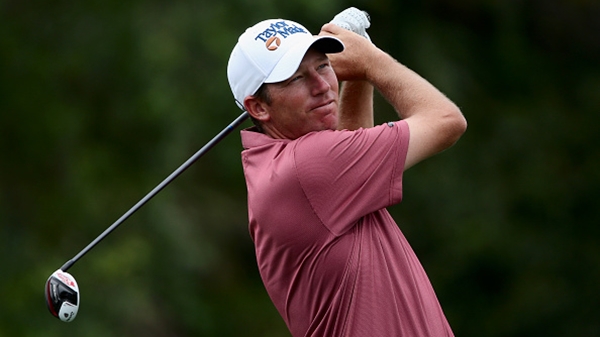 PALM BEACH GARDENS, Fla. – Playing in America for the first time this year, Rory McIlroy’s first shot was a 2-iron out of play.

A relentless wind with gusts that approached 35 mph provided a rude welcome to just about everyone Thursday at the Honda Classic except for Jim Herman, who somehow made it around PGA National without a bogey for a 5-under 65 and a one-shot lead.

McIlroy managed to salvage a tough day with by holing a 30-foot birdie putt and two-putting for birdie on the 18th hole for a 3-over 73. It was his highest opening-round score to par since a 3-over 74 at The Barclays seven months ago. And he didn’t seem too bothered.

The world’s No. 1 player was competing for the first time since he won in Dubai a month ago. And he wasn’t alone. He played with Dustin Johnson, who birdied his last two holes for a 77, and Phoenix Open winner Brooks Koepka, who shot a 78.

“The conditions were obviously very tricky from the start,” McIlroy said. “From the first hole, it was always going to be a day like that. I feel like I salvaged something out of the round the last couple holes, but it was just a day to keep trying, not to give up and know that anything around level, 1-, 2-over par still isn’t out of it.”

Only 19 players managed to break par. Only three holes – both par 5s and the downwind ninth – played under par. Seventeen players had a front-nine score of 40 or higher.

Herman didn’t mind the wind, though he moved to south Florida more than a decade ago and was surprised earlier in the week when there wasn’t hardly any wind at all. Even with a 65, it still wasn’t easy. He twice saved par from the fairway and rolled in a 35-foot birdie putt on the 16th hole.

“I don’t mind it blowing,” Herman said. “I feel like I can control the golf ball pretty well with my iron game. So yeah, it was OK that the wind was blowing.”

Brendan Steele pitched in from about 35 yards to save bogey on the 14th hole, a key moment in his round of 66. Martin Flores, Kapalua winner Patrick Reed and Padraig Harrington were at 67. U.S. Open champion Martin Kaymer was among those at 68.

Harrington would seem to feel at home in these conditions. On a day when the gusts were relentless, they still would be considered a wee breeze in Ireland. Except that the Irishman has spent the last four weeks in gorgeous, calm weather on the West Coast.

“If I had come from Ireland, I probably would be thinking it was a nice day,” Harrington said. “But having played the last four weeks over here, even I was struggling and questioning and doubting myself out there. I found it very difficult.”

McIlroy found that out immediately.

Even starting on the easier first hole, the wind fooled him and took his 2-iron far to the right and toward the driving range. Just like that, he was 2 over.

He found the water left of the green on the par-3 fifth hole for another double bogey, and came a foot within big trouble on the 14th. His tee shot sent left toward the houses and stopped about 18 inches from the out-of-bounds stakes. He made bogey to fall to 5 over with four holes remaining.

Walking to the 15th tee, the power group of the day had put up some shocking numbers.

Johnson, who contended at Riviera and Pebble Beach, was 9 over for his round. Koepka was 5 over. Collectively, that made the group 19 over.

“Walking from 14 green to 15 tee, I said to Brooks, `Let’s just make a couple birdies on the way in, try and get something out of it,'” McIlroy said. “Luckily, I was sort of able to do that. But it was tough. When nothing is going your way and you don’t really have anything to feed off, you don’t see many good shots and guys … we’re all struggling. It was a grind out there. We’ll all go home and put our feet up and get ready for tomorrow.”

No one could remember the last time they faced such wind, which wasn’t that strong for south Florida. There was virtually no wind in Hawaii this year, or even at Pebble Beach. It was a stiff start to the Florida Swing.

Reed had the best score of the afternoon wave, when the wind was at its strongest.

“When I hit 6-iron normally 200 yards and I’m pulling 6-iron from 170, it’s tough,” Reed said. “The main thing was just to stay in my golf swing and just be comfortable and try to be confident that’s the club to hit from those distances. I feel like I did a good job.”

Phil Mickelson opened with a 71 and was relatively pleased, though that was hard work. He hit into water hazards three times on the front nine.

“I really enjoyed the challenge of the day,” Mickelson said. “It’s fun to be back out competing, and I had a good day with the putter.”

Canada’s David Hearn was a shot better than Mickelson. The Brantford, Ont. native opened with a 70 to lead the Canadian contingent in Florida.