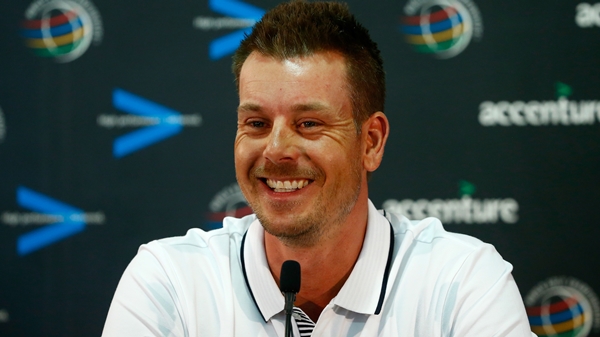 MARANA, Ariz. – Third-ranked Henrik Stenson is the top seed in the Match Play Championship with No. 1 Tiger Woods and No. 2 Adam Scott skipping the tournament.

Stenson will open Wednesday against Thailand’s Kiradech Aphibarnrat at The Ritz-Carlton at Dove Mountain. The No. 64 seed has beaten the No. 1 seed four times in the 14-year history of the event, including last year when Shane Lowry edged Rory McIlroy.

“It doesn’t really matter if you’re the No. 1 seed or if you’re No. 50,” Stenson said. “It’s going to be down to how you play and how you can get things working.”

The Swede won the World Golf Championships event in 2007 and was third in 2008, both down the road at The Gallery.

“I had two great years and then we changed courses,” Stenson said. “The record hasn’t quite been the same since. … We’ve been going home Wednesday afternoon every year since. I played poorly, once I was sick, and just haven’t got it going on this golf course.”

“The wrist has been OK,” Stenson said. “I’d be lying if I said I wasn’t worried that it could be an issue at some point, too, in the season. But it’s been holding up pretty good to this first month of the year and practicing. But I don’t think it’s the last time I hear from it. But as of now, it feels all right.”

He’s making his first U.S. start of the year after playing three European Tour events in the Middle East, the last early this month in Dubai.

“I had two nice weeks in Orlando, seeing the kids, seeing the family, bit of practice,” Stenson said. “Just feeling like we could put the suitcase down and relax for a little bit. So that’s nice. I’m feeling a bit fresher than I did when I came back from Dubai.”

Stenson was the last foreign winner on the PGA Tour. Since his Tour Championship victory, U.S. players have won the first 13 events in the wraparound season.

DeLaet is having a banner year, but struggled somewhat last week to a tie for 70th at the Northern Trust Open. Prior to last week, he had managed a top-10 finish in his previous five starts, dating back to October of last year.

Reed won the Humana Challenge in late January and has had two top-20 performances since.

“To have snow the last two or three years, my boys expect it when we come here,” defending champion Matt Kuchar said. “I think they’re still planning on it snowing. I think the rest of us are awfully happy to see proper Tucson weather.”

A high of 79 degrees with wind gusting to 20 mph in the afternoon was forecast for the first round Wednesday. On Thursday, the forecast high is 74 with wind up to 15 mph. On Friday through Sunday, it is expected to be in the upper 70s with light wind.

“I think the ball is going to be flying this year,” 2012 winner Hunter Mahan said. “Should be going pretty far, especially off the last two weeks playing basically at sea level.”

Last year, first-round play Wednesday was suspended when rain gave way to snow from a storm that dumped close to 2 inches and dropped the temperature to 33 degrees. More snow fell at night and play finally resumed Thursday afternoon. The 2011 championship match also was delayed by snow.

MANO A MANO: Bubba Watson is coming off a victory Sunday in the Northern Trust Open. He shot 64-64 on the weekend at Riviera.

“I can shoot 64 tomorrow and my playing partner shoots 63, so I played great, but I’m still a loser,” Watson said. “I’m going to go out there and keep the same things going. I’m really focused on what I’m doing right now, committed to each shot. I’m making some putts.”

WELL-RESTED WILDCAT: Jim Furyk is making his third straight start after playing only one event _ the World Challenge in December _ since the Tour Championship in September. The former University of Arizona player will open against McGladrey Classic winner Chris Kirk.

“I don’t know if I have expectations,” Furyk said. “Obviously I’d like to play well. I went to school here. I have a lot of support here. Match play is just a strange. It’s just strange for us to play. You can play pretty well and end up losing a match. You can play poorly and end up winning a match.”

Winless since the 2010 Tour Championship, he tied for 35th two weeks ago at Pebble Beach and tied for 23rd at Riviera on Sunday.

“I feel like I’ve played pretty well for my first two weeks back after a long break,” Furyk said. “I feel like there’s a few things I wanted to improve on. … I’ve had a couple of days here to work and improve.”