Henderson trails by a shot at Reignwood LPGA Classic in China 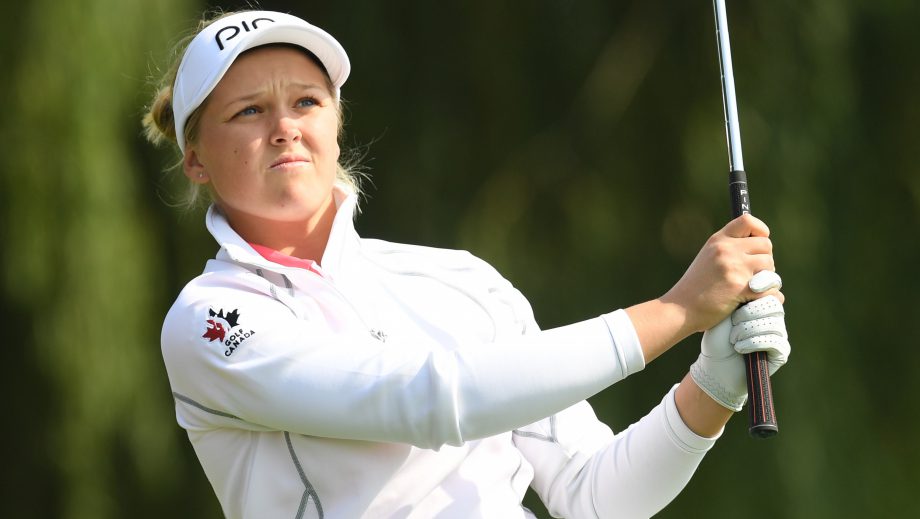 BEIJING – Ariya Jutanugarn birdied the final four holes for an 8-under 65 and a one-stroke lead over Canada’s Brooke Henderson on Thursday in the Reignwood LPGA Classic.

In position to take player of the year lead from idle Lydia Ko with a ninth-place finish or better, Jutanugarn had 10 birdies and two bogeys at Reignwood Pine Valley in the first of six events in the Asian Swing.

“All the players really want to win the award like player of the year,” Jutanugarn said. “I really want to, but right now I think I’m not really worry I’m going to win. I think I just have to be like, ‘Just keep play like this and have fun on the course.”’

The 20-year-old Thai player is No. 2 in the world and leads the LPGA Tour with five victories. Winless entering the season, she won three straight events in May, took the major Women’s British Open in July and the Canadian Pacific Women’s Open in August.

She’s making her first appearance in the event that was cancelled last year.

“I really enjoy it,” Jutanugarn said. “I like everything here.”

The fourth-ranked Henderson, of Smiths Falls, Ont., birdied three of the final four holes in a bogey-free round. The 19-year-old won the major KPMG Women’s PGA in June for the first of her two victories this season. She plans to play all six events in Asia.

“I’m looking forward to being really in Asia for the first time,” Henderson said. “I’ve visited a few other times, but this will really be the true taste of a bunch of different countries and language and culture. I am really looking forward to it.”

She travels with sister/caddie Brittany Henderson.

“It’s been an awesome year so far,” Brooke said. “And to have her there caddying for me, travelling together, you know, she’s my best friend and my sister, and I really enjoy it a lot.”

Two other Canadians are in the tournament. Maude-Aimee Leblanc of Sherbrooke, Que., opened with a 1-under 72 and Hamilton’s Alena Sharp fired a 1-over 74.

“I’m very proud of myself,” Salas said. “Even after the bogey on 16, I fought back with back-to-back birdies, I didn’t panic.”

“I felt pretty good about my shot,” Song said. “The last couple weeks I wasn’t happy with my ball trajectory, so before coming here I met my coach and worked on my swing and tried to get the normal trajectory that I want. I think that really helped me out this week.”

Chinese star Shanshan Feng topped the group at 70, holing out from the fairway with a wedge for eagle on the par-5 16th. The bronze medallist in the Rio Olympics, she won the inaugural Reignwood LPGA in 2013 at 26 under.