Henderson tied for 9th through 18 at Australian Open 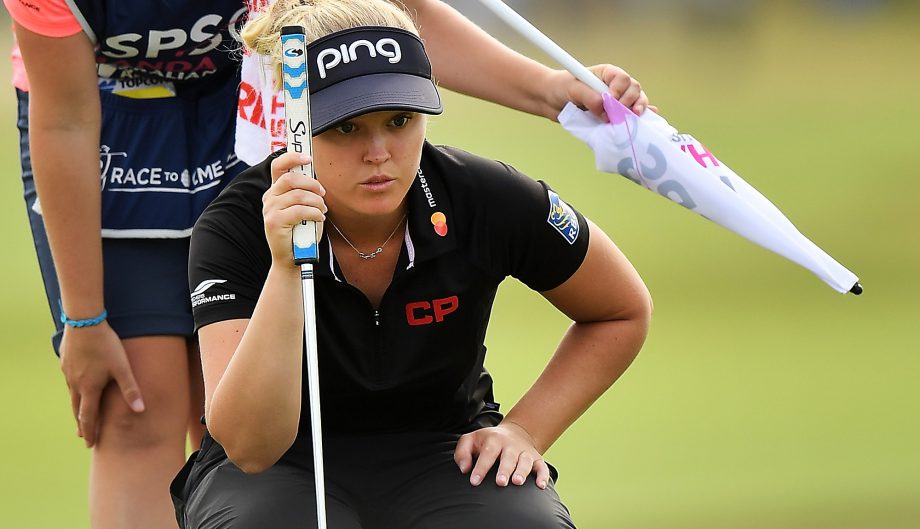 ADELAIDE, Australia – Katherine Kirk set the early pace at the Women’s Australian Open on Thursday, shooting an 8-under 65 at Royal Adelaide to take a two-stroke clubhouse lead.

The Australian, playing her fourth week in a row, birdied four of her first five holes and three of four in the middle of the back nine.

“There are low numbers to be had out there,” said Kirk. “A lot of birdie opportunities, and I was just fortunate I got off to a good start and kept the momentum going.”

Tied for second were Marissa Steen and Jane Park of the United States and South Korean Chella Choi.

Canada’s Brooke Henderson was four strokes behind after carding 69, while No. 1-ranked Lydia Ko shot 71. Five-time champion Karrie Webb shot 76 ahead of the afternoon starters who included No. 2-ranked Ariya Jutanugarn, a five-time winner last year.

“Four birdies, no bogeys, I’m pretty happy and hopefully will shoot another similar round tomorrow,” said Henderson, from Smiths Fall, Ont., who played with Ko. “The crowds were awesome. I hardly ever see that many people on the Thursday round, especially when we tee off (early) in the morning.”

Hamilton’s Alena Sharp and Maude-Aimee Leblanc of Sherbrooke, Que., were tied at 2-under 71. Calgary’s Jennifer Ha was 2-over 75.

Ko was frustrated on the greens, but ended the day on a good note when she birdied the ninth, her last.

“I hit my drives good, which is really important around a course like this, but just the putts did not drop,” Ko said. “It was good to see a putt drop on the final hole and hopefully that will give me good momentum going into tomorrow.”

Webb had an up-and-down second nine after starting on the 10th. She was 3-over after bogeying the first – her 10th hole – but then went double-bogey, bogey, birdie, birdie, par to complete her round.

“A couple of late birdies at least made lunch taste better, but it wasn’t real good out there today,” said Webb.

Steen was in the first group out, and took advantage of it during her round which included an eagle on the third.

“The wind was low, the greens were rolling really pure. I was joking that I didn’t see a blade of grass out of place out there the whole day,” Steen said. “I didn’t trip once. I either hit every green or was right on the fringe where I was still able to putt, so I gave myself a lot of chances and took advantage when I had wedges in my hands.”

“I played a bunch of other sports growing up, so focusing on golf I was a little late to it,” said Steen, who played at the University of Memphis in Tennessee for four years and then played Symetra Tour for three seasons.