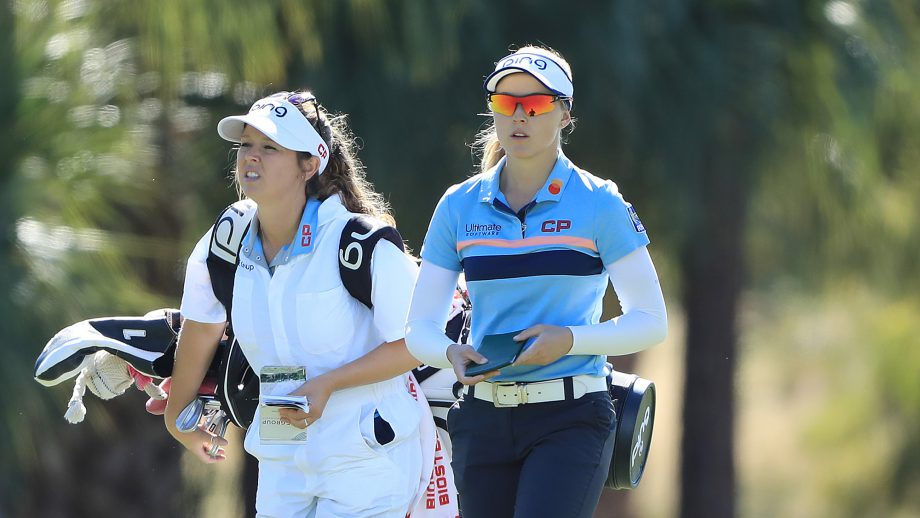 NAPLES, Fla. – Sei Young Kim set a goal of winning three times this year on the LPGA Tour, and she’s down to her last chance.

Reaching the goal would pay off big at the CME Group Tour Championship.

Kim scrambled to keep bogeys off her card Thursday along the back nine at Tiburon Golf Club, and then she pulled away from the pack with one big shot. Her approach on the par-5 17th narrowly stayed on the fringe of the green, and she holed the 12-foot eagle putt that carried her to a 7-under 65 and a two-shot lead in the final LPGA Tour event of the year.

The winner gets $1.5 million, the richest prize in the history of women’s golf.

“This tournament really special,” Kim said. “But I try to just make myself comfortable. I don’t put any extra pressure on myself.”

Nelly Korda, the highest-ranked American at No. 3 in the world ranking, did her best to make sure Kim didn’t get too far away, even after one round. She birdied the par-3 16th, holed a 35-foot eagle putt from just off the 17th green and closed with a 20-foot birdie. That took her from middle of the pack to a 67, leaving her two shots behind.

So Yeon Ryu and Georgia Hall, both past major champions, also were at 67.

“To be honest, this year is one of the worst seasons I’ve ever had,” said Ryu, who has yet to win this year. “So if I can win this tournament, it’s going to be awesome to finish the season, and then I’m not going to complain.”

That’s the effect of $1.5 million, which dwarfs the $1 million payoff at the U.S. Women’s Open, won by Jeongeun Lee6. The next-biggest check in women’s golf was $675,000 at the Women’s British Open.

The change this year at the Tour Championship is that all 60 players who qualified get the $1.5 million if they win the tournament. Previously, it was based on points from earned all season, and only the top 12 were given a shot at the $1 million bonus.

Because the money is official, Jin Young Ko is not assured of capturing the money title even though she has been the best in women’s golf this year. Ko, who won two majors among her four LPGA titles, clinched the LPGA player of the year with three tournaments left, and she leads the money list by more than $700,000.

Playing for the first time since an ankle injury caused her to withdraw in Taiwan three weeks ago, she made her way around Tiburon without a limp, but without many birdies, either. Ko took double bogey on the fourth hole, made her third birdie with a 12-foot putt on the par-3 eighth and closed with 10 pars for a 71.

Still, this day was more about players not shooting themselves out of the tournament.

That’s what Ariya Jutanugarn might have done. She didn’t make a birdie until the final hole to salvage a 76, leaving her 11 shots behind. Jutanugarn has yet to win this season, one year after she swept all the major awards on the LPGA Tour.

Brooke Henderson, one of seven players to win multiple times on the LPGA this year, did well to stay in the mix. She hit a thin 7-iron out of the pine straw on the 15th hole, a bad shot that turned good when it ran on the fast turf of Tiburon between bunkers and onto the green to 12 feet for birdie. She followed that by chipping across the green for a sloppy bogey on the 16th, and then failing to birdie the par-5 17th.

But the Canadian finished with a birdie to join the group at 68, leaving her just three behind with a lot of golf left.

“That made my round feel a lot better,” Henderson said. “I saw Sei Young at minus 7, which is a good score today. The wind was kind of hard to judge at times, but I think once you get on a roll, you can make a lot of birdies out here.”

There’s hope for Henderson and others, and concern that it also applies to Kim, a streaky player who holds the LPGA Tour 72-hole record to par at 31 under.

Defending champion Lexi Thompson made consecutive bogeys on the back nine and had to settle for a 70.