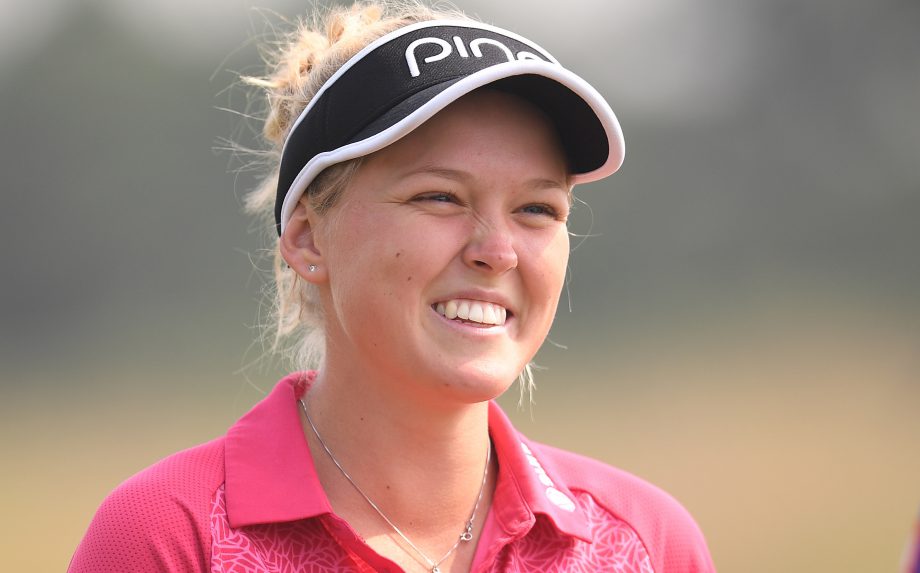 TAIPEI, Taiwan – Sakura Yokomine bogeyed the final hole for a 5-under 67 and a one-stroke lead over Brooke Henderson, Paula Creamer and Amy Yang on Thursday in the LPGA Taiwan Championship.

Yokomine eagled the par-5 12th – hitting a 5-wood to 15 feet – and had three back-nine birdies at windy Miramar before dropping the stroke on the par-5 18th. The 30-year-old Japanese player is winless in two seasons on the LPGA Tour after winning 23 times on the Japan LPGA Tour.

“My shots were good,” Yokomine said. “It was strong, a strong wind today. Each shot I had to concentrate.”

Henderson, of Smiths Falls, Ont., birdied three of the final four holes, playing in the last group of the day. The 19-year-old Canadian has two victories this year, winning the major KPMG Women’s PGA in June.

“It’s very windy out here so you really got to pay attention,” said Henderson, who chipped on the par-4 15th , with the ball racing downhill and hitting the flagstick.

“I kind of had a tough lie in the rough there on the left side of 15, and so I just kind of tried to hit it out to the right,” Henderson said. “I was thinking in my head, ‘Try and get up-and-down and save par and then try and make some birdies on the last three holes.’ I was able to chip that one in, birdie 16, had a good chance on 17, birdied 18. It was really the ideal ending.”

The fourth-ranked Henderson has two victories this year, winning the major KPMG Women’s PGA in June and successfully defending her Cambia Portland Classic title in July.

Yokomine and Henderson are making their 26th starts of the year, tied with Kim Kaufman for the tour lead. Henderson plans to play all six weeks on the Asian Swing, a journey that started last week in China with a fourth-place tie, and will take her to South Korea, back to China, and then to Malaysia and Japan.

Creamer had a bogey-free round, working with caddie Colin Cann in the windy conditions.

“I’ve always played really well when it’s windy and just kind of tough,” Creamer said. “You have to think a lot out there. Colin and I worked really well as a team today. It’s pretty windy in certain spots out on this golf course, and he did a good job of figuring that out for us.”

She won the last of her 10 LPGA Tour titles in February 2014 in Singapore.

Yang was 6 under through 13 holes, then bogeyed the next two.

“I’m playing this tournament since five years ago and I know how to play in the wind, especially on this golf course, so that experience helped for sure,” Miyazato said. “I grew up in Okinawa and Okinawa is really windy place, too. So, I kind of grew up playing in the wind.”

Defending champion Lydia Ko had a double bogey on the par-4 fifth in a 70. The top-ranked New Zealander won by nine strokes last year at Miramar. She has four LPGA Tour victories this season.

Home favourite Yani Tseng closed with a quadruple-bogey 9 on 18 for a 79. Playing on a sponsor exemption, she also had a double bogey on the 12th. Tseng won the inaugural event in 2011 at Sunrise, and took the last of her 15 LPGA Tour titles in March 2012.