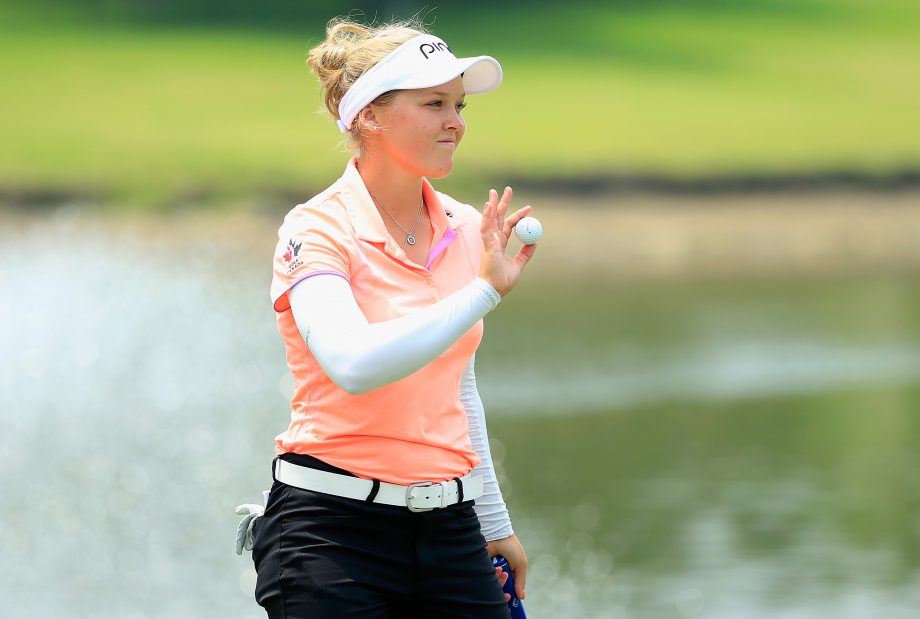 ANN ARBOR, Mich. – Ariya Jutanugarn ended a shaky round spectacularly, making a 15-foot eagle putt on the 18th hole Saturday at Travis Pointe to take a one-stroke lead in the Volvik Championship.

Trying to become the first to win three straight LPGA Tour events since Inbee Park in 2013, the 20-year-old Jutanugarn shot a 1-over 73 in the third round to reach 10-under 206. She became the first Thai winner in tour history three weeks ago in Alabama and followed that up last week with a victory in Virginia.

Following three straight pars, she teed off on the 500-yard, par-5 18th with a 3-wood and landed in the rough. From 220 yards, she an impressive 3-iron shot that went as planned.

Jutanugarn shrugs off her stellar play, but is earning praise from other players.

“It’s incredible what she can do with the golf ball,” said Christina Kim, who was tied for second. “It’s just absurd. She is able to dominate really any golf course without necessarily hitting driver on any hole

Korda said pin placements made Travis Pointe, a new venue on the LPGA Tour, play much tougher than it did the previous two days.

“They are tucked in a lot of places and the greens are just super firm,” she said.

Stiffer wind was a factor, too.

Hyo Joo Kim and Suzann Pettersen were 7 under, each shooting 70. Top-ranked Lydia Ko was tied for 25th at 2 under after a 72.

Jutanugarn has been playing better than any woman on the planet lately, including earlier in the week with a 65-68 start.

On Saturday afternoon, though, she fell back to the pack and then behind it with consecutive bogeys on Nos. 3, missing a 3-foot putt, and 4 and a third bogey to close the front nine. A bogey at No. 13 dropped her to 7 under and she birdied the next hole.

A freak accident was the only thing that slowed Jutanugarn down three years ago as a teenage phenom.

After finishing in the top four of each of the five tournaments she played in 2013, Jutanugarn fell off a tee box while running away from her sister, fellow tour player Moriya, who was trying to pour water on her while they were goofing around. Jutanugarn needed shoulder surgery and was knocked out of competition for nine months.

“I think it made her want it even more,” said Michael Yim, Jutanugarn’s agent.

Korda is aiming for her fifth title on the PGA Tour and first since winning last year in Malaysia. She has three top-10 finishes this year, including a tie for third.

Kim, meanwhile, has been struggling. A tie for 19th last month, her season-best finish, was followed by missing the cut and being tied for 45th and 65th the previous two tournaments. She won her third LPGA Tour title in 2014. Kim was leading late in the third round, but bogeyed No. 15 to fall into a four-way tie with Jutanugarn, Korda and So Yeon Ryu.

With a birdie on her first hole, Ryu was 10 under and among the leaders. She didn’t have another birdie the rest of the day and had four bogeys, including on Nos. 16 and 17, to fall to 3 over for the day and 6 under for the tournament and into a sixth-place tie with Belen Mozo (70) and Marina Alex (75).