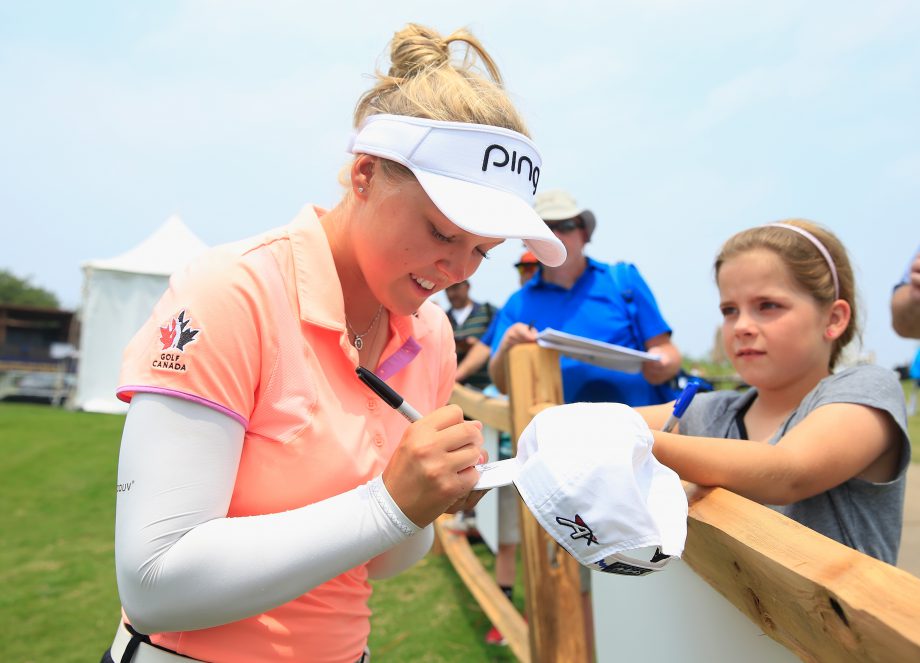 IRVING, Texas – Gerina Piller made herself right at home Friday in the LPGA Tour’shooting a 6-under 65 to take the lead in the suspended second round.

The long-hitting U.S. Solheim Cup player lives in Plano, about 20 miles from Las Colinas Country Club. She birdied three of the final five holes in her bogey-free round to reach 10-under 132.

“I don’t get to have my family out a lot, so having them out definitely takes my mind off of it because I just love spending time with them,” Piller said. “But it’s hard to get in your tournament routine when you go back home and you might have laundry to do or dishes to put away, something that you don’t normally do on the road. Tuesday trash day. So you’ve kind of got to remind yourself that it’s a tournament and just stick to your routine.”

Winless on the LPGA Tour, Piller tied for third last week in California in the Swinging Skirts LPGA Classic for her third straight top-six finish. She hit her approach to 2 feet on the par-5 18th to set up her final birdie.

“The course is actually in soft conditions so that always helps to get the ball to stop,” Piller said. “These greens are pretty tricky. So getting it close is definitely huge out here because the greens, some of them are pretty big, and some of the breaks you can get pretty fast putts going downhill down grain, and you can also get really slow putts going the opposite way. It definitely helps to be hitting it really well.”

She’s married to Martin Piller, the PGA Tour player who tied for fourth last week in San Antonio in the Texas Open. They crossed paths early Monday at the airport.

“It’s always fun to see him and just makes those times that we have together much sweeter,” Piller said. “We definitely don’t take our time that we spend together for granted. I’ll see him probably in two weeks, so it was nice to be able to see him for at least a couple hours.

South Korea’s Eun-Hee Ji was a stroke back at 9 under after a 66.

“I feel pretty good with my swing,” Ji said. “That’s why I made a lot of putts because so close to the pin. I just keep working on my swing.”

First-round leader Mi Jung Hur was 8 under with six holes left. The South Korean player lives in the area in McKinney.

Thailand’s Ariya Jutanugarn was 7 under after a 66, and South Korea’s Amy Yang was 6 under with seven holes left.

Fifth-ranked Brooke Henderson topped the group at 5 under after a 68. The 18-year-old from Smiths Falls, Ont., has eight straight top-10 finishes.

“It was a little bit softer after the rain last night and the greens were holding and you were able to be aggressive,” Henderson said. “I didn’t really take advantage as much as I would have liked, but 3 under is a solid round. I’ll have to be better on the weekend.”

Cheyenne Knight, a 19-year-old University of Alabama freshman from nearby Aledo, and South Korea’s Sei Young Kim also were 5 under. Knight, one of four amateurs who earned spots in the field March 16, had four holes left. Kim had seven holes remaining.

Fourth-ranked Stacy Lewis was a stroke over the cut line at 2 over with seven holes left. The 2014 winner in her home-state event, Lewis is winless in 47 events.

Third-ranked Lexi Thompson was 4 over with eight holes to play.

Michelle Wie will miss the cut after following her opening 76 with a 72. Last week, she withdrew during the final round of the Swinging Skirts because of neck spasms. She’s winless since the 2014 U.S. Women’s Open and hasn’t had a top-10 finish in 34 events.

Second-ranked Inbee Park, the 2013 and 2015 champion, is sidelined by a left thumb injury.