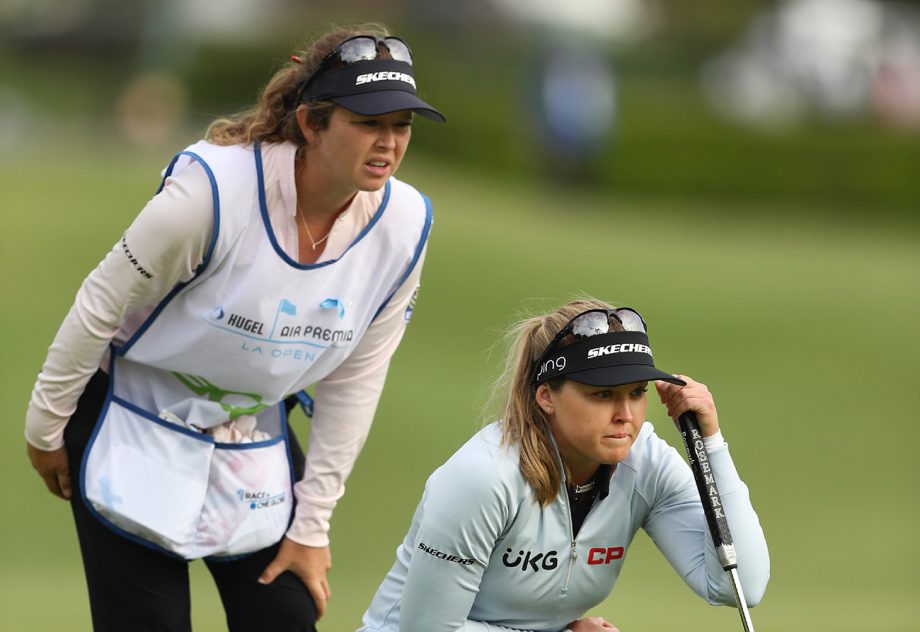 LOS ANGELES, CALIFORNIA - APRIL 23: Brooke M. Henderson and her caddie line up to putt on the 18th green during the third round of the HUGEL-AIR PREMIA LA Open at Wilshire Country Club on April 23, 2021 in Los Angeles, California. (Photo by Meg Oliphant/Getty Images)
Canadian Press

LOS ANGELES – Jessica Korda rode out a series of big momentum shifts Friday at historic Wilshire Country Club to hold onto the lead in the HUGEL Air Premia LA Open.

Six strokes ahead after three holes, tied with top-ranked Jin Young Ko at the turn and two shots back with three to play, Korda birdied the final two holes to take a one-stroke lead into the final round.

“I’m just trying to be patient,” Korda said. “It’s tough. It’s tough to win out here. Still have 18 holes left and I just want to give myself an opportunity to win.”

Korda shot a 3-under 68 to break the tournament 54-hole record at 16 under. She matched the event course record with a 64 on Wednesday and shot a bogey-free 65 on Thursday to break the 36-hole scoring record at 13 under.

“Honestly, it’s just hitting it in the right spots,” Korda said. “Pins were definitely tougher today than they have been the last two days, more tucked, so it was hard to be aggressive on a lot of them.”

Ko shot a 66, making a 30-foot bogey putt on the par-3 18th after driving over the green and watching her second bang into the bank and roll back to her feet.

“I knew that she was going to come out and play great,” Korda said about Ko. “That’s what she does being world No. 1. You wouldn’t expect anything less. I was just trying to play my own game, and that’s exactly what I’m going to try to do tomorrow.”

She won the season-opening Diamond Resorts Tournament of Champions in January for her sixth LPGA Tour title.

Korda birdied the first three holes to open the six-stroke lead, hitting to a foot on Nos. 2 and 3. She parred the next five and bogeyed the par-4 ninth to fall into a tie with Ko. Korda also bogeyed Nos. 11 and 13 before rallying late.

“It was tough,” Korda said. “Once we hit that mark of no movement for about 20 minutes, it was just really, really slow and it was hard for he to gain my momentum back. I was still hitting really good shots. I just didn’t have any opportunities. I was kind of always above the hole, and trying to nestle something down close to the hole is tough when you’re trying to make birdies.”

Ko had six birdies and a bogey in a front-nine 30. She bogeyed Nos. 10 and 11 and birdied Nos. 13-15. The seven-time LPGA Tour winner is coming off a two-week break after finishing seventh in the major ANA Inspiration.

“Tomorrow, I don’t care about my scores or whatever, just trying to my game on the course and have fun,” Ko said.

Brooke Henderson got a spot alongside Korda and Ko in the final group Saturday, shooting a 67 to get to 12 under. The Canadian birdied Nos. 15-17, then had a 7-foot birdie try slide left on 18. She rebounded from a double bogey on No. 6.

“I think when you have bad holes like that it’s really important to just stay patient and keep doing what you’re doing,” Henderson said.

Sei Young Kim, playing alongside Ko and Korda in the final group, had a 76 to fall into a tie for 18th at 4 under. She closed with her second double bogey of the day.

Korda broke the 54-hole mark of 11 under set by Minjee Lee in her 2019 victory. Lee holds the 72-hole mark of 14 under in the event that was first played in 2018 and was cancelled last year.