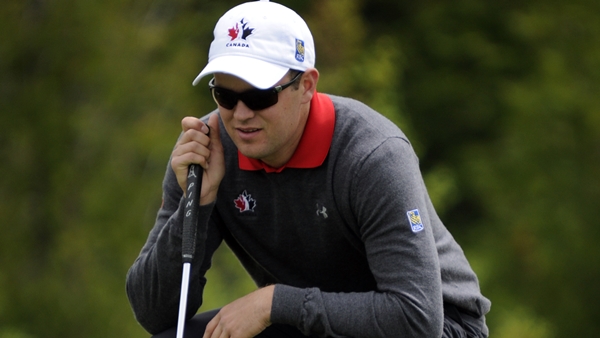 Global Golf Post has selected its second-annual All-Amateur team and Canada is well represented in this year’s picks.

The selections identify amateurs, from across the world, who have played exceptional golf over the last calendar year. In 2014, the selection committee chose 211 golfers from 23 different countries.

Corey Conners was selected to the Men’s Amateur 1st Team after a season in which the Listowel, Ont. native finished as the runner-up in both the US and Canadian Amateurs. The 22-year-old also captured the Jones and Tailhade Cups.

Joining Conners with distinctions in the Men’s Amateur category was Taylor Pendrith of Richmond Hill, Ont., who was selected to the 2nd Team. The long-bomber also had a successful 2014, earning victories at the Monroe Invitational and the Porter Cup, in addition to turning heads with a fantastic opening round at the RBC Canadian Open.

In the Men’s Mid-Amateur category, Garrett Rank and Rob Couture were both honoured with All-Amateur selections.

Rank, who hails out of Elmira, Ont., was selected to the Men’s Mid-Amateur 1st Team. He won the 2014 Canadian Mid-Amateur in a playoff over Couture at the Barrie Country Club. A member of the 2014 Team Canada’s National Amateur Squad, Rank also advanced to the to the Rd. of 32 at the US Amateur and Rd. of 16 at the US Amateur Public Links.

Couture, who finished as the runner-up in the 2014 Canadian Men’s Mid-Amateur, was selected to the Mid-Amateur 2nd Team. A dual citizen of the US and Canada, Couture was a semi-finalist at this year’s Crump Cup and finished in the top 15 at the 2014 Lupton Invitational.

Rounding out this year’s male honourees was Vancouver’s Doug Roxburgh, who was named to the Men’s Senior Amateur 1st Team.  The four-time Canadian Amateur Champion added to his already stellar career resume with a victory at the 2014 Canadian Senior Amateur just a month after clinching his second-straight and 13th overall B.C. Senior Amateur title.

On the women’s side, it comes as no surprise that Brooke Henderson was selected to the Women’s Amateur 1st Team. The Espirito Santo Trophy recipient was the runner-up at the US Women’s Amateur and had the low amateur score at this year’s US Women’s Open, where she tied for 10th. The 17-year-old from Smiths Falls, Ont. is currently the No. 1 ranked female amateur golfer in the world.

Henderson’s Team Canada Women’s Amateur teammate Augusta James was selected to the Women’s Amateur 2nd Team after a very strong summer. The Bath, Ont. native defeated Henderson to win the Canadian Women’s Amateur, in addition to finishing runner-up at the Ontario Amateur. James also advanced to the Rd. of 16 at the US Women’s Amateur.

Soon-Bin Kim of Coquitlam, B.C. was given an honourable mention for her excellent play in 2014. Kim was named Golfweek’s Women’s player of the fall after winning the Edean Ihlanfeldt Invitational and finishing as the runner-up at the Pac-12 Preview.

Stefi Markovich, a resident of Welland, Ont., was given an honourable mention in the Women’s Mid-Am category for a solid year in 2014.

In the Women’s Senior Amateur category, Judith Kyrinis and Helene Chartrand were named to the 1st Team, while Mary Ann Hayward was selected to the 2nd Team.

Hayward, who resides in Aurora, Ont., claimed the Ontario Senior Women’s Championship title and finished as the runner-up at the Canadian Women’s Senior Championship in August.