Henderson 3 back at $1.5 million LPGA finale 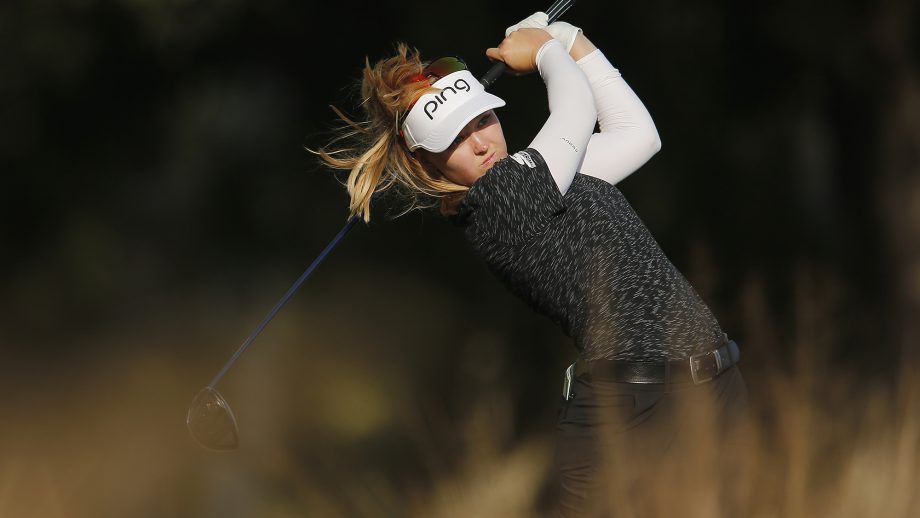 NAPLES, Fla. – Sei Young Kim wasted two good birdie chances late in the second round Friday when she got a pep talk from an unlikely source.

Cristie Kerr was working as a commentator for Golf Channel, and on the long walk to the 18th tee, she told Kim that a strong finish in the CME Group Tour Championship would make dinner that much better.

She fired a 6-iron to the perfect spot in the middle of the green and watched it roll toward the back pin until stopping less than 2 feet away. Kim tapped in for a birdie and a 5-under 67, keeping her lead at two shots in the chase for the richest prize in women’s golf.

Kim has made only one bogey over two rounds at Tiburon Golf Club and was at 12-under 132.

Everyone around her had far more excitement, not all of it good.

Caroline Masson of Germany atoned for missing a birdie chance on the par-5 17th by rolling in a 40-foot birdie putt from off the green and through the shadows on the final hole for a 66 that closed the gap to one shot until Kim finished with her birdie.

They will be in the final group on Saturday, moving closer to a shot at the $1.5 million to the winner.

Brooke Henderson of Smiths Falls, Ont., began her second round with a double bogey on the par-5 opening hole. She finished much better, with five birdies over her final seven holes that put her squarely back into the mix with a 67, leaving her three shots behind.

Henderson has a home not far from Naples and gets a big following, many of them Canadians in Florida for the winter.

“Great crowd, great energy out here,” Henderson said. “I’m excited to be playing the weekend near the top of the leaderboard, so it should be fun.”

Alena Sharp of Hamilton is at 2 under after her second straight 71.

Also three shots back was Nelly Korda, the top American in the women’s world ranking at No. 3, who didn’t finish so well.

Korda provided the biggest challenge to Kim all day, firing darts into the seventh and ninth greens for short birdie putts that gave her a 31 on the front nine and gave her a one-shot lead.

Korda was one shot behind when she missed a birdie putt on the par-3 16th, and then shockingly missed the 2-foot par putt.

Looking to get a shot back on the 17th, Korda instead hit a hard hook off the tee beyond the cart path and through the dirt until it came to rest under a tree.

“May be been a little ticked off,” Korda said with a grin. “I did snipe it left into the trees.”

She had no choice but to pitch back to the fairway and did well to give herself a birdie chance with a shot into about 15 feet, only to miss it. She made par on the final hole for a 68.

Su Oh of Australia had a 67 and was four behind, while the group five back included defending champion Lexi Thompson and Jessica Korda, both with 67s.

The format for the season finale changed this year, from only the top 12 in the Race to CME Globe have a chance at the $1 million bonus to all 60 players in the field winning $1.5 million in official money just by winning the tournament.

Friday was critical not to lose much ground.

Jin Young Ko, who received her award Thursday as LPGA player of the year, shot a 69 and remained eight shots behind. Jeongeun Lee6, the U.S. Women’s Open champion, felt a burden lifted and shot 67. She had six birdies, twice as many as the first round.

The burden had nothing to do with the big prize. Lee6 was rookie of the year, and she gave a moving speak in English before a full banquet room and without notes, having rehearsed it for two months. She received the loudest ovation of the night.

“A lot of people this morning were cheering and then they were congratulating me and then they saw that, `Oh, she did really well with the speech,’ and I felt really good about it,” Lee6 said. “And I felt like really good feelings about today, so my shots and my putting were good so far. But I kind of want to try my best I can for the last two rounds.”