Henderson 2-shots back of the lead in Westchester 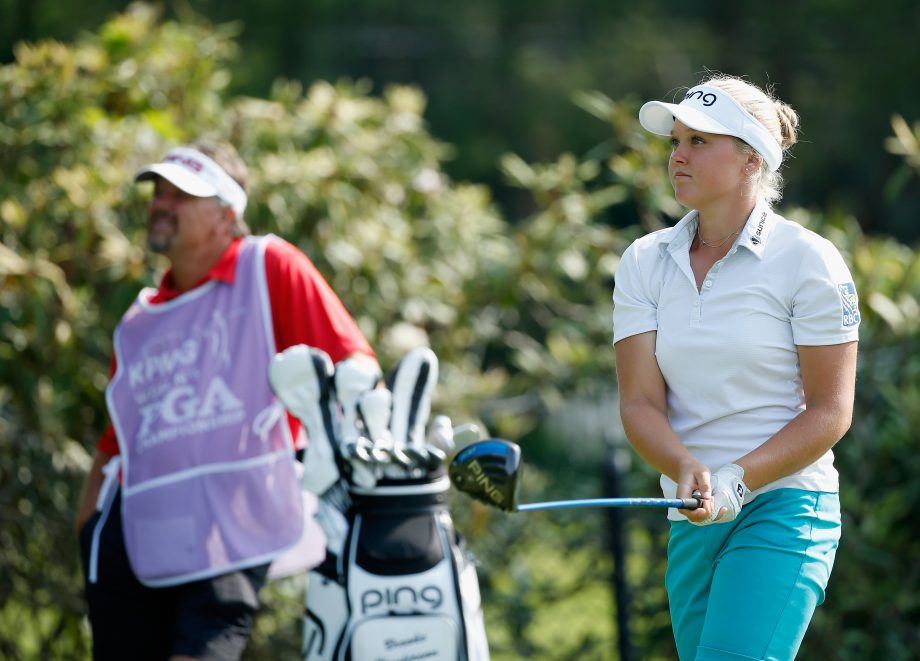 HARRISON, N.Y. – Sei Young Kim of South Korea has already won twice in her rookie season on the LPGA Tour.

Now the 22-year-old is taking aim at a major title, making an eagle on the 15th hole for a 5-under 68 Friday and a one-shot lead after the second round of the KPMG Women’s PGA Championship.

Kim overtook Hall-of-Famer Karrie Webb, who birdied the 18th for a 71. Kim, who turned pro in 2010 and played on the LPGA of Korea Tour, shot bogey-free golf to finish at 8-under 138 at the Westchester Country Club.

“My goal for this year is to become top five,” Kim said through an interpreter, “and if I win a major, I could be one step closer.”

Suzann Pettersen rallied with seven birdies for the best round of the day at 66 and tied Canadian teenager Brooke Henderson (73) at 6 under. Overnight leader Jenny Shin (75) and third-ranked Stacy Lewis (71) were three shots behind the leader.

Pettersen improved her score from the opening round by eight shots, making seven birdies from No. 5 to No. 15. Coached by Butch Harmon, Pettersen was coming off a win in Canada.

“I felt my speed of the greens was a little bit off yesterday. But stuck to the game plan,” she said. “I didn’t practice much after. I’m right where I want to be.”

Top-ranked Lydia Ko (76) missed the cut, which was 2 over, ending her streak of 53 consecutive made cuts. She had a double bogey on No. 2 to start her day and finished with four bogeys and three birdies.

“I just made a double and just couldn’t get anything turned around,” said the 18-year-old from New Zealand. “I missed a lot of 9-footers. I made two good putts the last two holes; it was already kind of too late.”

Kim won LPGA Tour events in the Bahamas and Hawaii this year. She said she likes the West Course, and watched a talented male pro play on the longtime home of the PGA Tour event now called The Barclays.

“I was inspired by Tiger Woods, how he was able to make shots and shot-making,” Kim said.

The 40-year-old Webb had three birdies and a bogey on the par-3 16th on another steamy day with temperatures in the 80s, which helped dry the greens. She hit her pitch shot within 5 feet on the par-5, 525-yard final hole.

“Nice to finish with a birdie on the last,” Webb said. “It was a little bit more difficult today. I think the greens really dried out a little bit. It was still quite challenging to get the ball close to the hole.”

The 17-year-old Henderson had five birdies and five bogeys in an up-and-down round with her father Dave as caddie. After three-putting on her final hole Thursday to finish a shot behind Shin, she bogeyed two of the first five holes on Friday.

She hit her approach shot at No. 17 within 8 feet for a possible birdie putt and a tie for the lead, but it ran past on the right.

“I didn’t have my A game,” said Henderson, playing in her fourth major. “I hit a lot of shots just really close to being really good but would just roll off the back because the greens. Just one of those days you have to learn from and move on.”

Henderson, who turned pro in December, is playing on a sponsor exemption because she is below the LPGA Tour’s age requirement of 18.

“It’s really exciting seeing my name up there with Stacy Lewis and Karrie Webb and all the big names,” she said. “It’s awesome. I think I just have to stay patient, stay consistent and keep working on my game and I think good things will happen.”

“I wanted to shoot under par and try to get away from everybody as much as possible and do the Jordan Spieth and win by like 10 shots,” Shin said. “But I was so frustrated, and I think that’s one of the reasons why I made so many bogeys.”

Lewis recovered from a double bogey on No. 2 with consecutive birdies on the sixth and seventh holes and capped her round with a tap-in birdie at the 18th.

“I think the officials didn’t quite like the 7 under they saw yesterday, so the golf course was set up a lot tougher,” said Lewis, a two-time major winner. “It played more like a major, which I like.”

Lexi Thompson, Cristie Kerr, and British teenager Charley Hull were in a group at 4 under. Hull, tied for the lead at 8 under at the 12th, bogeyed four of the last six holes to finish at 74.

Michelle Wie, bothered by ankle and hip injuries, birdied the 18th for a 72 to make the cut.

Canadian Alena Sharp shot a 1-over-par 74 today to make it to the weekend. Rebecca Lee-Betham shot a round of even par today but missed the cut along with fellow Canadian Sue Kim.