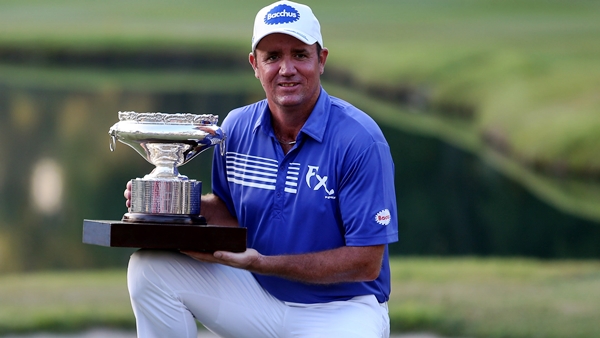 HONG KONG – Scott Hend beat Angelo Que of the Philippines in a playoff to win the Hong Kong Open on Sunday and become the first Australian to win the event since Greg Norman in 1983.

Que and Hend both ended the final round tied on 13-under 267 to force a playoff on the par-four 18th hole of the Fanling Course at the Hong Kong Golf Club.

Hend held his nerve to win on the first playoff hole with a par putt from five feet having watched Que bogey after failing to reach the green with his approach shot.

“I felt quite calm on that playoff. We were wondering how to play that hole because the pin was placed in a tricky position and you can easily make a bogey. It would have been nice to win with a birdie and on a positive note but I will take it,” said Hend.

It was the biggest win of the 41-year-old Hend’s career that includes five victories on the Asian Tour. With the tournament being co-sanctioned by the European Tour, it will allow the Florida-based Australian to play next season on the more lucrative tour.

Hend had begun the day one shot behind sole leader Marcus Fraser of Australia who was on 11 under. With the chasing pack never far behind, neither was able to build much of a lead.

Fraser lost his lead immediately when he double-bogeyed the first hole allowing England’s Mark Foster, who had started on nine-under, to grab the lead with two birdies from his first two holes.

The lead then changed hands again with Que, who had also started the final round on nine-under, rolling in three birdies on the 12, 13th and 14th to jump to a one shot advantage on 12 under.

Hend regained the lead at 13-under before Que pulled off a magnificent approach shot to within a foot of the pin from the edge of the woods lining the 18th fairway that allowed him to birdie the last hole and also go to 13 under.

“That was the shot of my career. My goal today was to just go under par but this is even better,” said Que after carding a 66.

He then waited as Hend in the final group came in. The Australian didn’t blink and finished his regulation round also on the same score forcing the play-off.

Ireland’s Kevin Phelan finished third on 11 under while Foster was fourth on 10 under.

Four-time major winner Ernie Els, struggling with a sore right hip, could only manage two birdies in his final round to end his first appearance at the Hong Kong Open on a disappointing note, tied fifth, after carding a one-under 69 to finish on nine-under 271.

“It is very disappointing, I didn’t play well at all this weekend,” said Els who had led by two shots at the halfway mark. “I’m having trouble with my hip and the lower I go down, the more a nerve or something catches. If I can sort my hip out I have got a game good enough to win a tournament before the end of this year.”

Els is on a month-long Asian swing and will play at the Macau Open next week before heading to China and Malaysia.

“My hip has been bothering me for a while and it will not keep me out of playing in the rest of the tournaments. I will bite the bullet and hope an elbow can improve my condition. Maybe I might even do some Chinese acupuncture,” Els said.