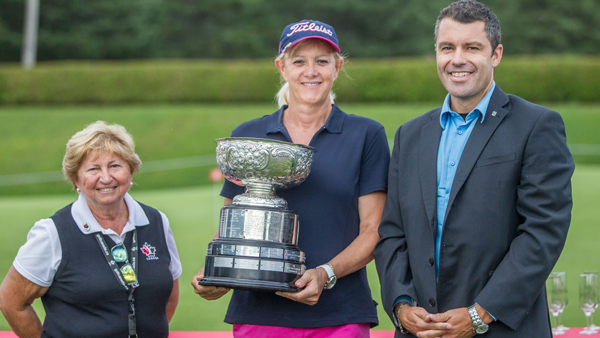 Chartrand entered the third and final round seven strokes behind Hayward, who led the field at 5-under 141 after Wednesday’s second round. After Hayward made three bogeys on the front nine followed by four more on the back, Chartrand was able to match the 3-time champion with an even-par score of 219 for the tournament, leading to a hole by hole playoff. Chartrand defeated Hayward with a birdie on the second playoff hole.

“Mary Ann is a great player,” said Chartrand who fired a 2-under 71 final round. “Basically I had nothing to lose; coming back from seven strokes was part of the miracle.”

This win comes almost one month after Chartrand claimed the Mid-Master title at the 2014 Canadian Women’s Amateur in Woodstock, Ont.

“I got more confident with my game playing with all of the youngsters and all the superstars,” she said of her Mid-Master win. “I think it built some confidence in my game and I kind of learned that I can come back.”

Winning the 2014 Canadian Women’s Senior has earned Chartrand an exemption into the 2014 U.S. Women’s Senior in Deal, N.J. She’s no stranger to the tournament, having played it twice in 2013 and 2012.

“It feels so great [to have earned an exemption] because I did ask for an exemption and I was rejected,” said Chartrand. “I did play in the last two U.S. [Women’s] Seniors and I just loved it. So for me, it’s a dream come true to be able to go. It will be my third one in a row and I’m very excited.”

Judith Allan-Kyrinis of Thornhill, Ont. finished nine strokes behind Chartrand and Hayward to claim third place in the tournament with a score of 9-over 228. Sherbrooke’s own Jocelyn Smith finished one stroke behind at 229 for the championship.