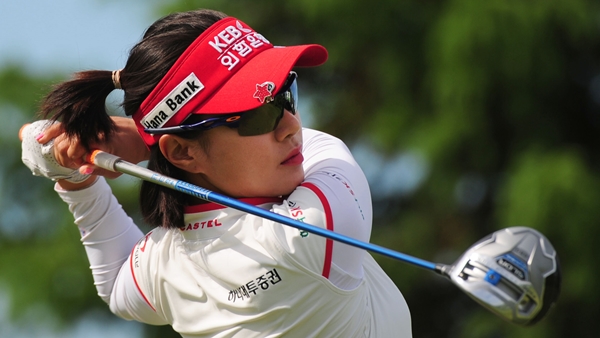 “The weather was lot better than first round,” Park said. “I hit a lot of greens. My goal was try to leave uphill putts and that worked well. I think that makes me more comfortable.”

Last year, Park beat Angela Stanford with a birdie on the third playoff hole after they finished at 26-under 258 to match the tour record for lowest total score.

“I have a lot of good feelings on this golf course,” Park said.

“I’m really happy about my playing today because it’s a bogey-free round again, six birdies,” the Chinese player said. “I think I did pretty well. … I heard the weekend’s supposed to be nice, so we need to go for many, many birdies.”

Wie, the winner in Hawaii in April, followed her opening 65 with a bogey-free 67. She’s seeking her second victory in Canada after winning the 2010 Canadian Women’s Open in Winnipeg, Manitoba.

“Just wasn’t getting anything close to the hole today,” Wie said. “Just got a lot of putts close. But yeah, it’s not a really easy golf course. Definitely, the wind was changing a lot today. There were a lot of times where I thought it was downwind and it was into the wind, so that was definitely difficult.”

Anna Nordqvist, a two-time winner this year, was 9 under after a 64 – the best round of the week. The Swede, the winner in Thailand and Carlsbad, played her opening nine – the back nine at Grey Silo – in 5-under 30 and added birdies on Nos. 3 and 4.

“I got off to a really good start. I hit it good all day,” Nordqvist said. “I think I hit all fairways and all greens, so that makes it a little bit easier. I’m a little bit disappointed with the last couple holes because I hit a lot of good putts that didn’t go in. Last one I left it about a roll short dead in the middle.”

Second-ranked Inbee Park four strokes back at 7 under a 66.

“I putted really a lot better than last couple weeks this week, yesterday and today,” Inbee Park said. “Even if everything’s not going in, I see it going really close to the hole. So I’m really happy with my stroke and I just need to hit more shots a little bit closer because there’s obviously a lot of opportunities here. Just trying to make a lot of birdies.”

Stacy Lewis was 4 under after her second straight 69. She’s making her first start since taking the top spot in the world from Inbee Park with a victory Sunday in New Jersey.

Third-ranked Lydia Ko also was 4 under after a 67. The 17-year-old Ko, the Swinging Skirts LPGA Classic winner in California in late April, won the Canadian Women’s Open as an amateur the last two years.

“I feel great when I play in Canada,” Ko said. “The support is humungous and that’s, I guess, where we get our power and confidence from.”

Team Canada’s Brooke Henderson of Smiths Falls, Ont., Jennifer Kirby of Paris, Ont. and Sue Kim of Langley, B.C. share top spot among Canadians. The trio are 1-under and tied for 46th.

Hamilton’s Alena Sharp has a share of 60th at even par, while Monday qualifier Nicole Vandermade of Brantford, Ont. is tied for 70th at 1-over.