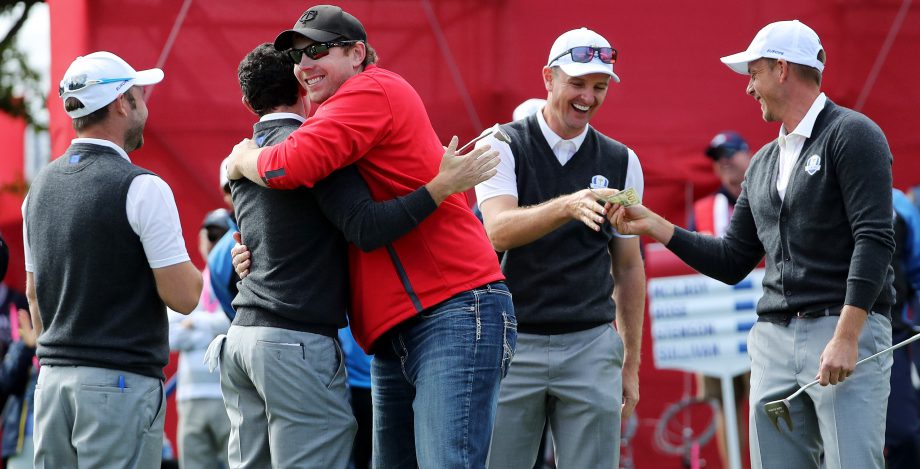 Fan David Johnson of North Dakota hugs Rory McIlroy of Europe after being pulled from the crowd and making a putt on the eighth green as Andy Sullivan, Justin Rose and Henrik Stenson of Europe look on during practice prior to the 2016 Ryder Cup at Hazeltine National Golf Club on September 29, 2016 in Chaska, Minnesota. (David Cannon/Getty Images)

The Ryder Cup is known for rowdy galleries. A vocal heckler walked the walk after talking the talk during the practice round on Thursday.

Rory McIlroy and Andy Sullivan took multiple cracks at a 12-foot putt on No. 8 and missed every time. David Johnson, of Mayville, North Dakota, let them know about it, saying he could make the putt. Henrik Stenson pulled Johnson from the gallery and Justin Rose laid a $100 bill right next to the ball, daring Johnson to make it.

After wisecracking that the putter he was handed was too short, Johnson muttered, “home soil, right?” Then he drilled the putt , eliciting a roar from the crowd. Johnson pumped his arms wildly and earned high fives from the entire Euro foursome as they exited the green.