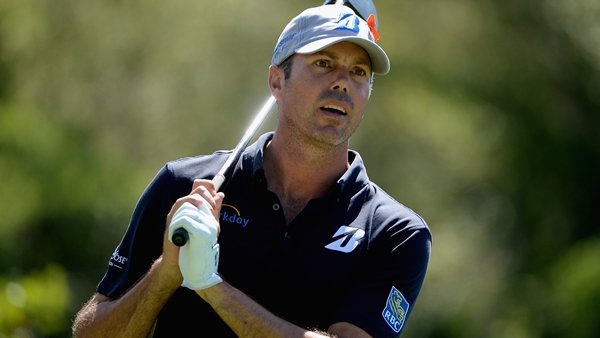 NORTON, Mass. – With an orange ribbon on his hat and nine birdies on his card, Matt Kuchar pulled within a shot of the lead Saturday in the Deutsche Bank Championship. Not that he needed a reminder, but a message posted on the scoring table spoke to the emotions involved in this tournament.

Players were offered a chance to donate to a trust fund for the 4-year-old daughter of Lance Bennett, his caddie. Bennett’s wife, Angela, died of a seizure Wednesday. Kuchar decided to play to raise awareness and get the tour involved in helping the family.

Ryan Palmer overcame a rocky start for an even-par 71. Jason Day struggled at the end for a 68. They were tied for the lead on the TPC Boston going into the third round of a FedEx Cup playoff event that ends on Labor Day.

Kuchar was a shot behind after a 66 that featured six consecutive birdies around the turn.

On his bag is Brian Reed, a longtime friend who introduced Kuchar to Bennett several years ago.

Kuchar was overcome by emotion Friday when he saw caddies – and even some players – wearing a black hat with the orange ribbon in honor of Bennett’s wife. There were times he had a hard time taking the club back.

Saturday was easier, which he attributes to the natural progression of grief.

“Still felt like Angela was on my mind almost every hole, every shot,” Kuchar said.

The next few days might not be easy for anyone. The TPC Boston has a history of yielding low scores. Henrik Stenson won a year ago at 22-under 262, and the worst winning score since it became a FedEx Cup playoff event was 15-under 269.

That seems far off given these conditions – swirling wind and fast greens that get bumpier in the afternoon.

Palmer, who started with a 63, made birdie on his first hole and thought he was off to the races. He followed with a double bogey, a bogey and then tried to hang. A birdie on the final hole put him at 8-under 134.

“It could have gone the other way real quick,” Palmer said. “I was glad to get that last birdie on 18 and salvage even (par).”

Day, who shared the 54-hole lead last week at The Barclays, looked as though he might pull away. Day ran off five birdies on the front nine for a 31 to build a two-shot lead, only to drop four shots coming in. He caught a flyer on No. 12 that went over the green into a hazard, played a low chip through thick rough and made a big bogey putt.

He still had the lead when he went from the green in two on the par-5 18th. The ball went long, and he hit a flop out of thick rough that ran through the green and into the bunker, leading to his third birdie of the back nine.

Even so, he was atop the leaderboard in another playoff event. He has adjusted to a weaker grip to protect from injuring his thumb again. And his confidence is growing.

So is his respect for the TPC Boston.

“You get yourself above the trees, it can be very difficult to judge how much wind there is,” he said. “And if you get too far below the trees, it doesn’t get hit by the wind at all. It played tough today. I played good on the front nine, played kind of average on the back nine. But I got it in.”

A trio of players hopeful of a Ryder Cup pick on Tuesday – Bill Haas, Keegan Bradley and Webb Simpson – were among those at 6 under. U.S. Open champion Martin Kaymer had a 66 and joined the group at 5 under that included Jordan Spieth.

Rory McIlroy had a double bogey late in his round that slowed his momentum. He had a 69 and was five shots behind. Phil Mickelson is still playing, and looking better to play next week, too. Mickelson had a 69 and easily made the cup at 1-over 145.

The top 70 in the FedEx Cup move on to Cherry Hills in Denver next week for the third playoff event.

But Mickelson’s work is not over. Because 80 players made the cut at 3-over 145, there will be a 54-hole cut Sunday. It will be the second straight week for a secondary cut. That has happened only two previous times in six years during the playoffs, and Mickelson has missed out both times.