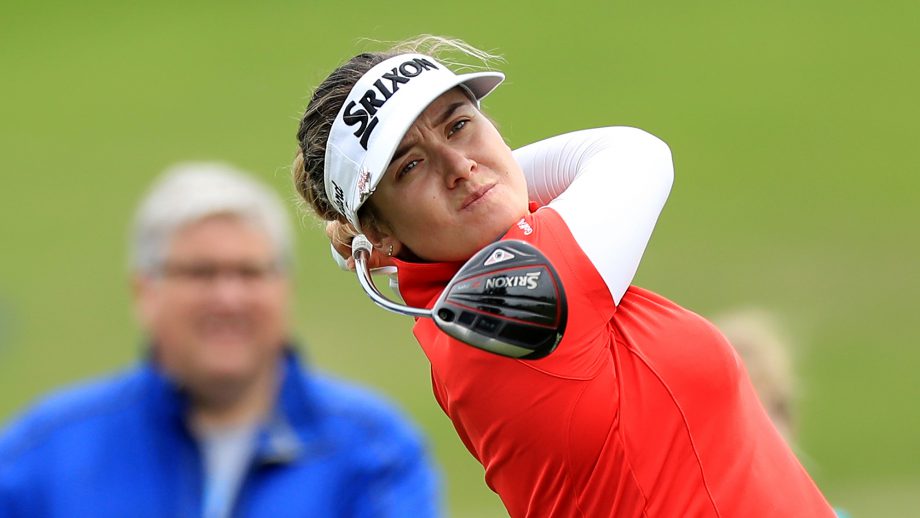 CHASKA, Minn. – Hannah Green keeps getting out of tough spots, and it’s taken her to a place she has never been.

Green twice escaped trouble with unlikely par saves, including one shot she holed from off the green, and made four birdies for a 3-under 69 and took a three-shot lead into the weekend at the KPMG Women’s PGA Championship.

It’s the first time she has held the 36-hole lead in her second year on the LPGA Tour.

The 22-year-old Australian has made one bogey over 36 holes at Hazeltine National, one of the strongest tests of the year. Ariya Jutanugarn, a two-time major champion, closed within one shot until a series of misplays on the back nine. She had another 70.

“Even when you play this type of golf at just a regular event, you’re pretty proud of yourself, but this week especially,” Green said. “I’ve never put myself in this position in any event, so to be doing it this week at such a great venue definitely shows things are going the right way. I’ve had some luck going my way. I do hope that continues.”

Defending champion Sung Hyun Park (71) and Lydia Ko (70) were four shots behind. Fifteen players remained under par after two rounds, with the cut at 5-over 149.

Michelle Wie not only made it to the tee, she played all 18 holes with a right wrist injury that doesn’t seem to be getting any better. She managed only nine pars and no birdies in her round of 82.

“Even on the worst day, it’s still great being out here,” Wie said. “I still had fun today, just stuff is hard. Hazeltine is hard. I just was overly optimistic about how I could play this week and the status of my wrist.”

Green thought luck was on her side when she holed a short-sided bunker shot for birdie on the par-5 seventh near the end of her opening round. Friday was even better.

She didn’t notice the water right of the 12th green during practice rounds. She took a penalty drop, and with the pin on a shelf in the back left of the green, her biggest concern was getting it close without the risk of a big number.

“If I landed it too far there was a possibility of it going over the back. I didn’t want to leave myself with another chip to then possibly make bogey or double at worse,” Green said. “I had to land it perfectly and I guess I did. I knew it was going to be close but I didn’t think it had the chance of going in. I really wasn’t really watching it going into the hole. I just heard the crowd roar.

After a missed chance at birdie on the par-5 15th, Green was in trouble again on the 16th hole, the signature hole at Hazeltine. Her shot took a surprising kick to the right, leaving the ball between clumps of grass. She got that up-and-down for par and was on her way.

Jutanugarn hit 6-iron to 30 feet for eagle on the par-5 seventh and closed out the front nine to get to 6 under. But her chip came out heavy behind the 13th green and led to bogey, and she turned a birdie opportunity into bogey on the par-5 15th.

After hammering her 3-wood, she hit a piercing 2-iron that stayed down the right edge and went into the first of two bunkers. With the pin tucked behind the next bunker, she went from sand to sand, blasted out to 12 feet and missed the par putt.

Green is in her second full year on the LPGA Tour, having won three times on the Symetra Tour in 2017 to earn her card. She had such a successful amateur career in Australia that she was awarded the Karrie Webb Scholarship in 2015, and one of the perks was coming to the U.S. Women’s Open at Lancaster.

The 44-year-old Webb is Australia’s most prolific champion with seven majors as part of her 41 titles on the LPGA Tour. Webb, the only player to win five different LPGA Tour majors, first came to America under a similar program started by Greg Norman, and now has one in place for female amateurs.

Green swam, played tennis and golf as a teen before devoting her time to golf when she was 15. She wasn’t even playing golf when Webb was winning five out of eight majors, giving her the career Grand Slam at the quickest rate. About the time Green realized she might have a future in golf, Webb already was in the Hall of Fame.

“As soon as I had the chance to come to the U.S. Open, that’s when Karrie was my idol,” Green said. “I feel like all other Australian golfers have her as an idol. She had Greg Norman as her idol and had a similar scholarship. She’s done that for us. I’m really grateful that she’s given so much to so many people.”

As for Wie, she was headed to Florida to find answers, unsure when she would play next.

“In an ideal world, I would wake up and my wrist is fine, I play next week and everything would be perfect,” she said.

Alena Sharp of Hamilton was the low Canadian at 3 over while Brooke Henderson was 5 over.