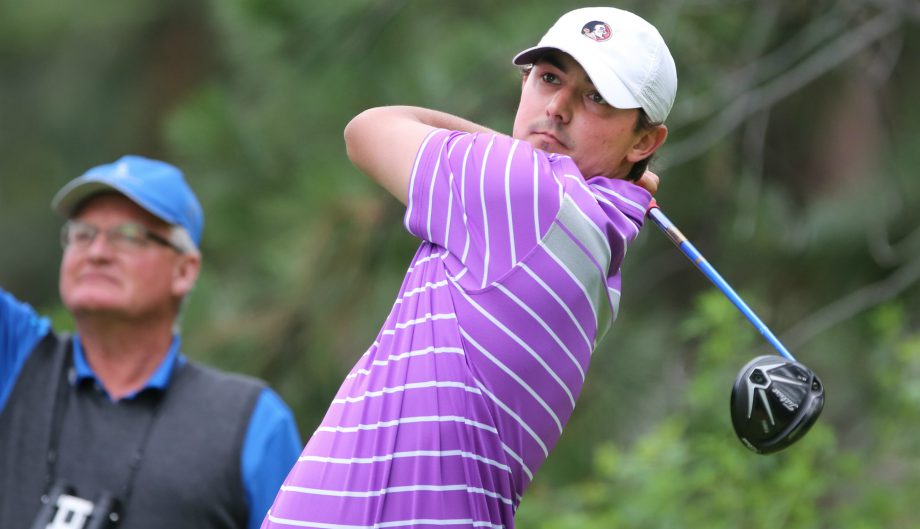 Winter Springs, Florida’s Hank Lebioda reached 13-under par on Saturday at Les Quatre Domaines Golf Club during the third round of the Mackenzie Investments Open presented by Jaguar Laval before play was suspended due to darkness.

The 23-year old shot a second-straight 6-under 64 earlier in the day during Round Two, then was 1-under for the first five holes of his third round to sit two strokes ahead of Kimberley, B.C.’s Jared du Toit at 13-under when play was suspended for the day at 8:25 p.m.

“I took care of business and handled each shot as best as I could. I tried to hit as many fairways and as many greens and give myself as many looks as possible,” said Lebioda, who said he was just trying to enjoy the ride. “It’s never simple. It’s just some days it’s easier than others. Everyone says you’ve got to focus on the task at hand, but the easiest way I found was just to enjoy it and soak it all in and see the positives in it.”

Lebioda, who sits sixth on the PGA TOUR Latinoamérica Order of Merit thanks to two runner-up finishes, says he’s hoping to continue his standout play this year despite missing the cut in his first two Mackenzie Tour starts of the season.

“I’ve had a good year so far on PGA TOUR Latinoamérica, and I don’t feel like I’m doing anything different. I just found a recipe that works for me, and I’m enjoying the process right now,” said Lebioda.

Du Toit, who made a move late on Saturday evening going 7-under for his 13 holes of Round 3 before play was called, carded seven birdies and was without a bogey for the round.

“Oh, big time,” responded du Toit when asked if it felt like a bonus to get extra play in on Saturday night. “It feels like a head start a little bit. It’s almost too bad that there’s no more light, because I would have loved to stay in the rhythm and tried to keep it going, but all-in-all I’m very happy with how the day went.”

Du Toit is coming off a standout amateur career that concluded in June with his senior season at Arizona State University, where he was named a 2017 NCAA 2nd team All-American.

The Kimberley, B.C. native is a member of Golf Canada’s National Team and captured the attention of a nation last year when he played his way into the final group on Sunday at the RBC Canadian Open before finishing T9.

Du Toit turned professional at the Bayview Place Cardtronics Open presented by Times Colonist and earned status on the Mackenzie Tour by placing inside the top-60 on the Order of Merit through the first re-shuffle after last week’s Players Cup.

One shot behind du Toit was Victoria, B.C. resident Robbie Greenwell at 10-under.

After turning pro in 2016 and playing on the Mackenzie Tour, where he finished 33rd on the Order of Merit thanks to two top-10 finishes, Lebioda has been playing the best golf of his professional career on PGA TOUR Latinoamérica this season.

The Florida State alum currently ranks sixth on the PGA TOUR Latinoamérica Order of Merit thanks to four top-10 finishes, including two runner-ups.

“Every time I come out here to play, it’s an opportunity. I’m doing my best to enjoy it. even though I haven’t won on PGA TOUR Latinoamérica, I’ve given myself opportunities and been in position, and you’ve got to learn from it,” said Lebioda.

At Florida State, Lebioda was a 2015 and 2016 NCAA All-American and became the program’s all-time leader in par-or-better rounds.