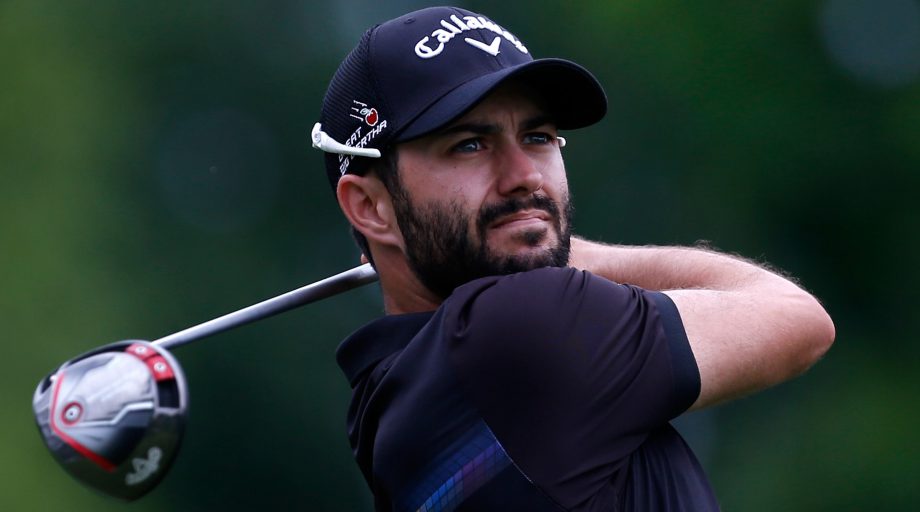 DUBLIN, Ohio – A storm system that rolled through Muirfield Village late Saturday only further muddled the outlook at the Memorial.

Emiliano Grillo had the lead, came back from a 2 1/2-hour delay and promptly made double bogey. Matt Kuchar was rolling along after recovering from a freak bounce early in his round only to chop his way to bogey on the final hole.

Kuchar, who shared the 54-hole lead with Gary Woodland and William McGirt, sized up the final round when someone asked what it would take to win.

Kuchar rallied from a rough start and wound up with a 2-under 70 to join Woodland (69) and McGirt (64) at 14-under 202. The starting times were moved up for Sunday with players going off both tees in an effort to beat more bad weather in the forecast, which is easier to predict than the winner.

Twenty players were separated by four shots. Eight of them have never won on the PGA Tour. Three of them can avoid U.S. Open qualifying if they were to win.

And all of them would like nothing more than to relish a winner’s handshake with tournament host Jack Nicklaus.

That includes the No. 1 player in the world.

Jason Day, a Muirfield Village member who has never finished in the top 25 at the Memorial, ran off two quick birdies to get within one of the lead, only to watch a chip roll back past him into the fairway on the 18th hole for a double bogey and a 68. He was three shots behind.

Rory McIlroy was making headway until he dropped a shot at the last for a 70 that put him five back.

The other member of the modern Big Three never recovered from his mistakes. Jordan Spieth, after two quick birdies, went through a stretch of poor swings and missed putts, dropped four shots in a six-hole stretch. He had a 74 and was 10 behind.

So many others were still in the game, although Grillo appeared the least happy. He was at 15 under and on the 17th tee when he says an official told him to wait because the horn was getting ready to sound. It did a minute later, and Grillo said he would have rather hit.

When he returned, his tee shot went deep in the rough, he hacked out to the fairway, just missed the green to the left and took double bogey.

“I had to go home with 10 shots instead of eight, or maybe seven, the way I was playing,” he said. “But it is what it is, and tomorrow will be another day.”

Woodland and McGirt are among dozens of players who face 36 holes of U.S. Open qualifying Monday, but they can take care of that with a victory, which would put both well inside the top 60 when the cutoff falls a week later. A victory for Scott Brown, three shots back after a 69, likely would do the same.

“I’m feeling pretty confident about where my game is,” said Woodland, who has made only one bogey in 54 holes at Muirfield Village. “I’ve been playing well for a while, and it’s starting to come together.”

McGirt cares only about winning. He has gone 164 starts on the PGA Tour, and he figures it’s about time. He played like it Saturday, going 5 under through his opening five holes with an eagle on the par-5 fifth hole. McGirt dropped a shot on the tough par-3 16th, answered with a birdie and signed for a 64.

“This game owes you nothing,” McGirt said. “I feel like I’ve put myself in position a few times, and it’s one of those things where you kind of have to screw it up a couple of times before you learn. I feel like every time I’ve been in this position I’ve learned something. So hopefully, tomorrow, if I can make it work out, it would be good.”

Kuchar won the Memorial three years ago. Johnson is a powerful presence at any tournament.

And then there’s Day.

He was determined to show he can play the Memorial better than he has, though little mistakes have held him back. Just short of the 18th, he had a pitch mark behind his ball on a delicate shot, caught it fat and watched it roll off the false front (the pin was in front), past his feet and back to the fairway.

“At the start of the day, if they said you’re going to shoot a 68, I would have taken it,” he said. “I think I played pretty good. I hit a lot better than I did yesterday, and there’s a lot of positives going into tomorrow.”