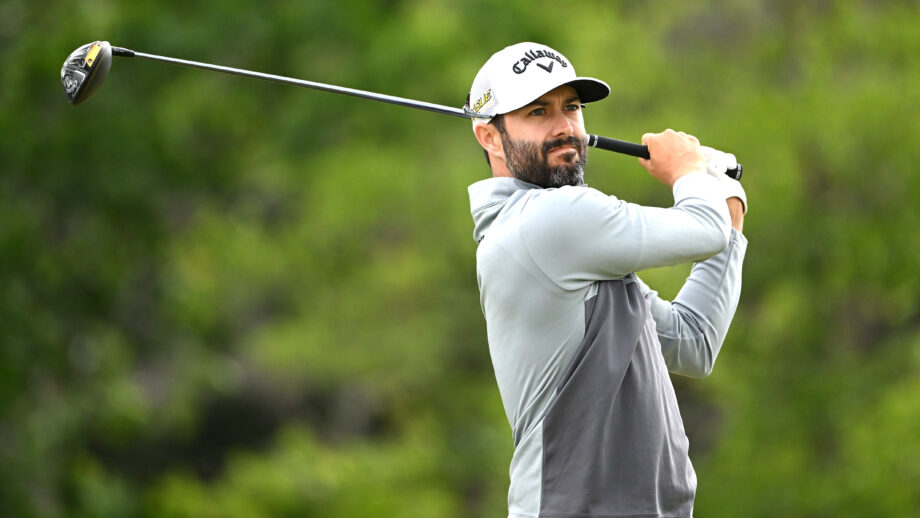 Adam Hadwin plays his shot from the eighth tee during the U.S. Open Championship at The Country Club on June 18, 2022 in Brookline, Massachusetts. (Photo by Ross Kinnaird/Getty Images)
Doug Ferguson/ Associated Press

Fitzpatrick of England is a champion again at The Country Club – A U.S. Amateur champion in 2013. The U.S. Open champion Sunday.

In a three-way battle at Brookline that came down to the wire, Fitzpatrick seized control with a great break and an even better shot on the 15th hole for a two-shot swing. He was just as clutch from a fairway bunker on the 18th that set up par for a 2-under 68.

Victory was not secure until Will Zalatoris, who showed amazing fight back from every mistake, dropped to his knees when his 15-foot birdie putt on the 18th just slid by the left side of the cup. Zalatoris, who closed with a 69, was a runner-up in the second straight major.

Masters champion Scottie Scheffler never recovered from back-to-back bogeys to start the back nine that cost him the lead. He had a 25-foot birdie chance on the 18th that just missed and left him one behind with a 67.

Along with the $3.15 million in prize money, Fitzpatrick had that gold Jack Nicklaus medal draped around his neck, which was only fitting.

Fitzpatrick, who briefly played at Northwestern before turning pro, won for the eighth time worldwide, and this was his first in America – at least a tournament everyone knows about. He won the member-member at The Bear’s Club in Florida at the start of the year, the course Nicklaus built.

Fitzpatrick and Zalatoris were tied going to the 15th when the Englishman hit his tee shot so far right that it went into the gallery and found a decent lie on grass that was dead and trampled. Zalatoris missed by only a few yards and was buried in deep grass.

He hit 5-iron from 220 yards to 18 feet below the hole. Zalatoris went into the front bunker, blasted out to 25 feet and made bogey. Fitzpatrick took a two-shot lead when his birdie putt went into the cup with such perfect pace it didn’t even touch the pin he leaves in the cup.

Zalatoris again bounced back, taking on a tough pin at the par-3 16th to 7 feet for birdie to cut the lead to one shot. Both missed 12-foot birdie chances on the 17th, and then Fitzpatrick missed a fairway at the wrong time, pulling it left into a bunker with a steep patch of rough right in front of him.

It looked like a playoff was eminent – the previous three U.S. Opens at Brookline were all decided by a playoff _ and then Fitzpatrick fearless hit a fade with a 9-iron that carried the gaping bunker in front of the green and settled 18 feet away.

He narrowly missed and could only watch as Zalatoris missed his last chance.

Fitzpatrick finished at 6-under 134.

The 27-year-old Fitzpatrick, the first Englishman since Justin Rose in 2013 to win the U.S. Open, felt his time was coming. He is meticulous in charting his shots and keeps a record of all of them to identify what needs work. And he emphasized speed in his swing over the last two years, giving him the length and the belief to compete with anyone.

That didn’t make Sunday any easier, a three-man race from the start when Jon Rahm and Rory McIlroy fell back and never rejoined the mix.

Fitzpatrick and Zalatoris, who shared the 54-hole lead, each had a two-shot lead at one point.

Zalatoris, who lost in a playoff to Justin Thomas in the PGA Championship last month, recovered from two early bogeys. They were tied when Zalatoris made an 18-foot birdie putt on the short par-3 11th, and Fitzpatrick three-putted for bogey from the same range.

The 25-year-old from Dallas suddenly had a two-shot lead. He also couldn’t keep the ball in the fairway, and it cost him with a dropped shot on No. 12. And then came another big turning point, with Fitzpatrick holing a 50-foot birdie putt across the 13th green. Zalatoris did well to make his 15-footer for par and they headed for the tense conclusion.

Scheffler was still hanging around in his bid for a second major this year, but everyone else became a distant memory. Hideki Matsuyama had the low round of the week at 65, but he finished at 3-under 277, and that was never going to be good enough.

In the end, it was Fitzpatrick sharing hugs with his family on the green, including younger brother Alex, who caddied for him in the U.S. Amateur and recently turned pro.

And there was his caddie, Billy Foster, one of the most popular, long-serving loopers in Europe who had never been on the bag for a major until Sunday.

Mackenzie Hughes of Hamilton, Ont., finished tied for 24th at 4-over.