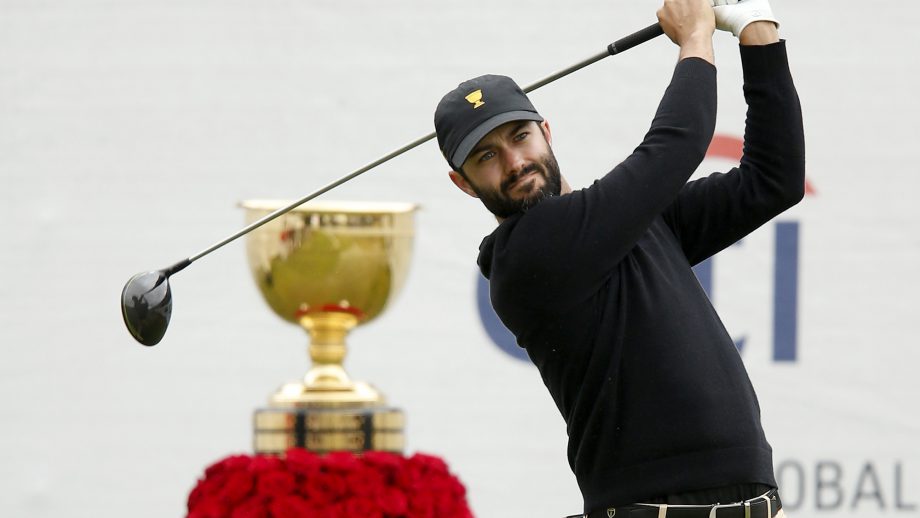 MELBOURNE, Australia – Tiger Woods lightly pumped his fist with another birdie. He raised his hands over his head in applause to salute a brilliant play by Justin Thomas that led to another hole won. He thoroughly enjoyed his return to competition in the Presidents Cup.

His match won, Woods took the radio and inserted the ear piece as he resumed his role as U.S. captain.

And there was little else to cheer.

Ernie Els and his inspired International team won the day, and won it big.

Els got solid performances from Adam Scott and Louis Oosthuizen and remarkable play from his rookies that led to a 4-1 lead after the opening session of fourballs Thursday.

It was the first time the International team won the opening session since 2005, which also was the last time it led after any session in an event the Americans have won 10 out of 12 times, including the last seven in a row.

Woods assembled the strongest U.S. team ever for the Presidents based on the world ranking. The first playing captain in 25 years, he inserted himself in the first match and made six birdies, the most of anyone at Royal Melbourne.

When it was over, the U.S. team found itself in foreign territory – trailing for the first time in 14 years.

“We have to earn this cup,” Woods said, perhaps a reminder that history means little inside the ropes. “Just because we lost the session doesn’t mean the Cup’s over. There’s a long way to go, a lot of points available. The guys will regroup, and we’ll come out tomorrow ready to go.”

That was a message Els preached to his team after a dynamic performance.

Scott overcame a snap hook on the opening hole to make five birdies as he and Byeong Hun An – the replacement for Jason Day – won in 17 holes. Hideki Matsuyama holed a 25-foot birdie putt on the 17th hole that carried the Japanese star and C.T. Pan to a 1-up victory over Patrick Reed and Webb Simpson.

Oosthuizen and Abraham Ancer, the Mexican rookie who has received praise all week for his fire and confidence, opened with five straight birdies in a crushing defeat over the American power duo of Dustin Johnson and Gary Woodland.

But it was just a start.

“Keep the jets down,” Els said. “There’s a long way to go. Don’t get too excited. This is a strong team, and they’re going to come back strong.”

Woods was so strong that he decided to play again in Friday foursomes, again paired with Thomas. Woods kept two other teams together – Patrick Cantlay and Xander Schauffele, and Reed and Simpson – even though both lost.

Els is sending out five new partnerships, sticking to a plan that so far is working quite well.

“He had a system going in. We are his soldiers, so we follow his instruction, and that’s what we did today,” C.T. Pan said. “And it works great.”

Woods showed off an exquisite short game, building a 2-up lead after two holes with pitch-and-run shots that set up easy birdies. He chipped in for birdie on the par-5 fifth, and closed out the match with an 8-foot birdie on the par-3 14th and a 5-footer on the next hole, his sixth birdie in the 15 holes he and Thomas needed to beat Marc Leishman and Joaquin Niemann.

Asked what worked well in their first time playing together, Thomas replied, “Tiger was working well.”

Little else did for the Americans, but that was more a product of great play by the International team that Els assembled to try to win the Presidents Cup for the first time since 1998, its only victory.

The International team walked off the course with arms around shoulders, a most happy occasion after having lost seven in a row since the tie in South Africa in 2003.

The middle three matches is where the International team seized control in the opening session. Adam Hadwin and Sungjae Im won the 16th hole with a par, and Schauffele and Cantlay didn’t have good birdie looks over the final two holes to lose.

“We have a good team. We know we have a good team,” said Hadwin. “It’s about us going out and executing golf shots, and our goal was to get them down early, get the crowd into it and on our side and hopefully carry some momentum these next three days.”

The biggest of Scott’s five birdies was a 12-footer to halve the 14th and protect a 2-up lead that led to victory on the 17th hole over Tony Finau and Bryson DeChambeau, now winless in first four matches in the Ryder Cup and Presidents Cup.

The last chance for the Americans to at least get a half-point came in the last match on the course. Reed, who heard his share of needling from the crowd over his rules violation in the sand last week in the Bahamas, made a 12-foot birdie putt to square the match on the 16th, only for Matsuyama to deliver his big putt on the next hole.

Reed’s 30-foot birdie putt on the 18th to halve the match stayed above the hole.

Perhaps typical of the Americans’ day was when Johnson, playing for the first time since Aug. 25 because of knee surgery, smashed driver on the 330-yard 11th hole to just inside 4 feet. He missed the eagle putt, Ancer made a 12-foot birdie to keep the 3-up lead and the American team never got any closer.

It was only the fourth time the International team has led after the opening session, and it was their largest margin after one day.

“This is the start we needed,” Scott said. “We’ve got to try to keep this lead now as long as possible, and hopefully the week runs out.”