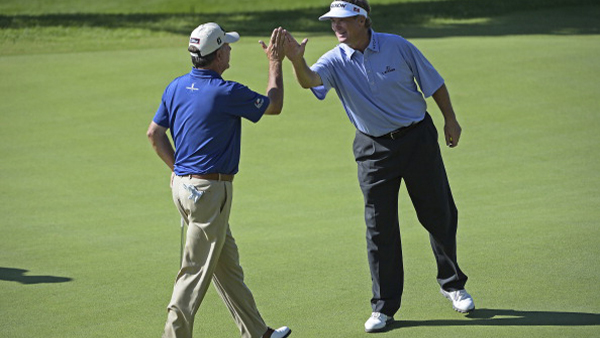 RIDGEDALE, Mo. – Jay Haas and Peter Jacobsen took the second-round lead Saturday in the Champions Tour’s Legends of Golf, teaming for a 6-under 48 on the par-3 Top of the Rock course.

Haas and Jacobsen played nine holes of alternate shot and nine of better ball at Top of the Rock, the first par-3 course used in a PGA Tour-sanctioned event, after opening with a better-ball 62 on Friday on the regulation Buffalo Ridge layout. They had a 15-under 110 total.

Jeff Sluman and Fred Funk were second after a 50 on the par-3 course, the site of the final round Sunday.

In Legends Division for players 65 and older, the teams of Jim Colbert-Jim Thorpe and Bruce Fleisher-Larry Nelson shared the lead at 7-under 118. Colbert and Thorpe had a 2-under 52 on the par-3 course, and Fleisher and Nelson shot 56.

Craig Stadler and Kirk Triplett were third in the Champions Division, shooting a 64 at Buffalo Ridge. The teams of Tom Watson-Andy North and Tom Pernice Jr.-Bob Tway were tied for fourth at 11 under after rounds on the regulation course. Watson and North had a 65, and Pernice and Tway shot 64.

In the Legends Division, Jack Nicklaus and Gary Player had a 66 at Buffalo Ridge to move into a tie for third with Butch Baird and Al Geiberger at 4 under. Baird and Geiberger had a 54 on the par-3 course.