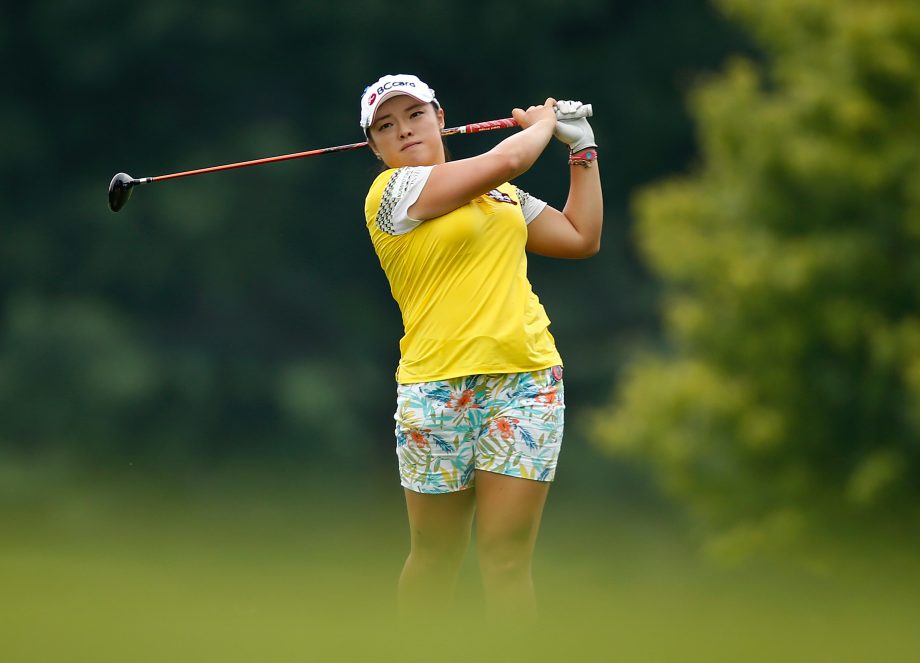 SYLVANIA, Ohio — South Korea’s Ha Na Jang shot a 4-under 67 on Friday to increase her lead to two strokes in the suspended second round of the LPGA Tour’s Marathon Classic.

Jang had a 9-under 133 total at Highland Meadows. Winless in 23 career tour events, she capped her bogey-free round with a 12-foot birdie putt on the par-4 ninth.

South Korea’s Q Baek was second after a 67.

The start of the round was delayed 2 1/2 hours because of rain and lightning, and play was suspended for the day at 8 p.m. because of more lightning. Fifty-four players were unable to complete the round.

Jang has fought through back problems that had her thinking about withdrawing before the first round.

“I think not much practice makes it easier to playing golf,” Jang said. “Not tired. Just feels really, really good. Body is a little tight, but my swing is very good.”

She had a one-hour massage after Thursday’s round and planned to do the same thing Friday.

Her success during the first two rounds has helped Jang’s confidence. She went back to South Korea to play in two tournaments and that also helped improve her confidence.

“I have a little bit more confidence in Korea,” Jang said. “It’s just a little different feel than one month ago. Every day practicing, change my swing and then everything change really good. I have 100 percent, 200 percent confidence right now.”

“(I) missed a lot of birdie opportunities earlier, but I was able to sink a couple putts a bit of a distance from the hole,” Baek said. “I really gained confidence from there and made four birdies in a row.”

Baek said her experience last weekend at the U.S. Women’s Open has helped.

“I played last week at the U.S. Open with great players,” Baek said. “I learned a lot from them. I had a good experience there. I have something that I am really focusing on this week, so going into the weekend, I am really, really looking forward to it.”

Baek said she was not bothered by the morning delay, adding that she enjoyed the additional sleep.

Shanshan Feng, Sarah Kemp and Dewi Claire Schreefel were tied for third at 6 under. Feng shot a 67, Kemp had a 69, and Schreefel a 68.

Kemp, an Australian, bogeyed her final hole for the second straight round.

“It’s nice to put another round in the 60s,” Kemp said. “I’ll take 69 around here any day. With the conditions this morning, it played a lot longer.”

Being able to advance to weekend play is exciting for Kemp, who has missed the cuts in seven of 12 starts this season.

“This is great. I’m going to enjoy it because it hasn’t happened very much so it must mean I’m doing something good,” Kemp said. “I haven’t been in this position very much so everything that happens from now on it a total learning experience.”

Moriya Jutanugarn, Caroline Masson, Angela Stanford and Gerina Piller were 5 under. Jutanugarn shot a 66, Masson and Stanford had two holes left, and Piller had three to go.

Canadian Alena Sharp is 4-under for the tournament was tied for 10th after second round of play.

Top-ranked Inbee Park and defending champion Lydia Ko, ranked second, were 4 under after 14 holes. Third-ranked Stacy Lewis was tied for 18th at 3 under after a 68.

“Score-wise it was obviously better,” Lewis said. “Still I think, just knowing me, I think I could have done better. I could have made a few more putts. But all it all, it really was a better day. Hopefully, it leads to some better things.”