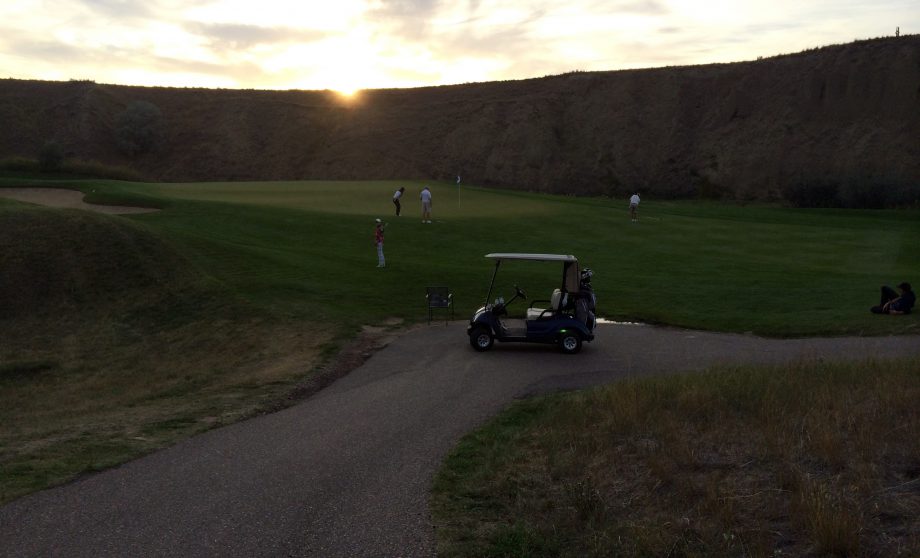 MEDICINE HAT, Alta. – Wind gusts of up to 65km/h forced the delay of the first round at the 2015 Canadian Senior Men’s Championship at Desert Blume Golf Club in Medicine Hat, Alta.

Approximately half of the competitors in the field of 156 were able to finish their first rounds after a six-hour delay. The remaining players will begin their opening rounds on Wednesday, September 2 at 7 a.m. MDT with revised tee times. Round two is slated to begin following the completion of the first round.

“Unfortunately the weather didn’t fully co-operate with us for the start of our national championship,” said Tournament Director Mary Beth McKenna. “You can play in windy conditions, however when wind gusts become so strong that still balls start to move, the course becomes unplayable. We remain confident that we will catch up and have a full 72-hole championship.”

Leading the way among players who finished their first rounds was Ronald Kilby of McAllen, Texas, who battled through the gusty winds to shoot 4-under 68.

“I felt like I controlled my distance with the irons really well coming into the greens. I didn’t have any really hard putts, I felt like I was below the hole and kind of where I wanted to be most of the day putting-wise,” said the 2014 Texas Senior Amateur champion.

Kilby started on the back nine and was even-par through six holes when play was delayed. “I just stayed out here and chipped and putted through the delay so that I didn’t tighten up a whole lot,” said the 60-year-old who shot five-under par on the front nine after the stoppage. Highlighting his round were four straight birdies through the fifth to eighth holes.

Four shots back is William Jackson of Oklahoma City, Okla., at even-par. Jackson began his round on the back nine at 2-over par, followed by a bogey-free two-under front nine to break even.

George Stokes of New Hamburg, Ont., leads the Super Senior Division after a 6-over 78. The 70-and-older division is played concurrently with the first two rounds of play.

An Inter-Provincial competition also takes part over the course of the first 36 holes of the Canadian Men’s Senior Championship and will see teams tee off for their first rounds tomorrow morning.

This week’s champion will earn an exemption into the 2015 U.S. Senior Amateur at Hidden Creek Golf Club in Egg Harbor Township, N.J., from September 26 to October 1.

The first round of the Canadian Men’s Senior Championship will continue on Wednesday at 7 a.m. Players who completed their first rounds on Tuesday will tee off for their second rounds beginning at 11:50 a.m. MDT. Scoring, pairings and start times can be found online here.