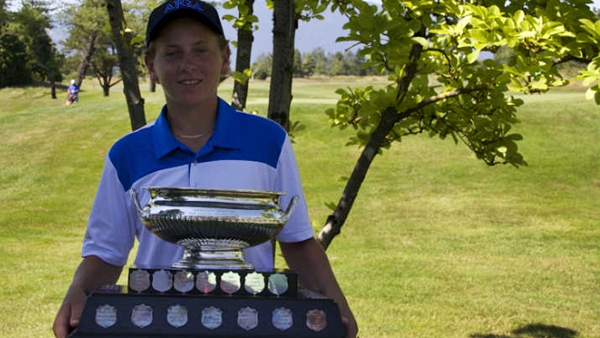 It came down to the final hole. Tied with Trevor Yu of Vancouver at 4-under with one hole left to play, it looked like a playoff may be imminent, but the 15-year-old from Victoria, B.C. showed incredible composure hitting the clutch birdie putt to claim the title.

“I improved a lot over the winter and had some good scores in the start of this year,” he said. “I was looking good coming into this tournament and I just played really well.”

Gudz entered the final day of competition after an incredible five-under-par 67 took him to just a single stroke back of Yu and Chris Crisologo of Richmond, B.C., who were tied for the lead. His fantastic performance carried on into the final round, starting with a first-hole birdie. He briefly ran into some trouble bogeying the 435-yard par-4 number 16, but for the fourth day in a row, capped off his round with a birdie on the final hole.

“I wasn’t really expecting anything,” said Gudz. “I just stayed loose and played as good as I can I guess, I was really happy.”
.
Yu finished tied at second with Curtis Chan. The 17-year-old playing out of Marine Drive Golf Club never dropped lower than second place and played consistently all week shooting 69-71-72-72. He entered the Championship fresh off of a win at the CN Future Link Western Championship last week.

Chan played a remarkable final round, finishing the day 7-under par. He bettered his third round score by 10 strokes to find himself in the top three. Chan will not represent BC at the Canadian Junior Boy’s Championship as he is already committed to the Boys’ Junior America’s Cup which conflicts with nationals July 29- August 1.