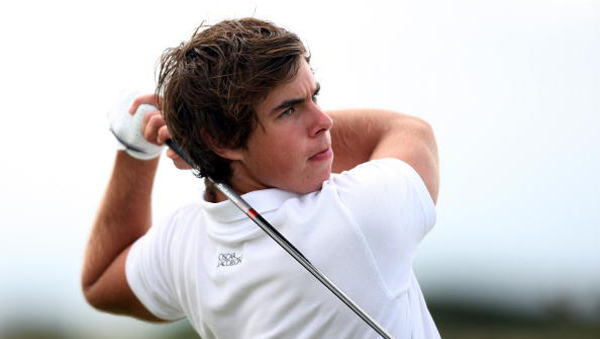 (Ottawa, ON) – Leicester, England’s Greg Eason shot an 8-under 63 on Thursday at Hylands Golf Club to take the first round lead at the inaugural Forces & Families Open. Eason carded seven birdies, an eagle and one bogey to lead by one over Crookston, Minnesota’s Travis Ross and Longwood, Florida’s Sam Ryder.

The PGA TOUR Canada rookie, who is playing in his first season as a professional following a standout career at the University of Central Florida, was upbeat about his round despite a bogey at the 18th hole following an errant tee shot.

“I only really missed one shot and that was the tee shot down the last. I played some nice golf. I thoroughly enjoyed the day, to be honest,” said Eason, who was the runner-up at the Staal Foundation Open presented by Tbaytel three weeks ago in Thunder Bay. Eason missed his first cut of the season last week at the ATB Financial Classic despite shooting 3-under par for the first two rounds, and said he was excited to continue what has been a strong year so far.

“I never really did anything that badly last week, it’s just the scores were very low and mine weren’t,” Eason said. “I played well the week before and I’m just trying to do the same things I’ve been trying to do all year.”

The 22-year old, who now calls the Orlando area home, has three top-25 finishes on the season including his runner-up finish in Thunder Bay. Currently eighth on the Order of Merit, Eason said the experience of being in contention in front of galleries and under pressure has already helped him mature as a player in his first season as a professional.

“I’d not played in front of that many people before,” said Eason, who finished second to Cincinnati, Ohio’s Wes Homan by a shot. “It was a great experience and I thoroughly enjoyed the day with Wes, and I think hopefully it will give me a good step for this week. I’m just hoping to continue what I’ve been doing, and hopefully try and sneak in that top five.”

Ryder, who finished a career-best T10 last week at the ATB Financial Classic, and Ross were one shot back of Eason, followed Scotland’s Paul Ferrier and Libertyville, Illinois’ Michael Schachner at 6-under 66.

Seann Harlington is the leading Canadian, scoring 69 in the opening round.