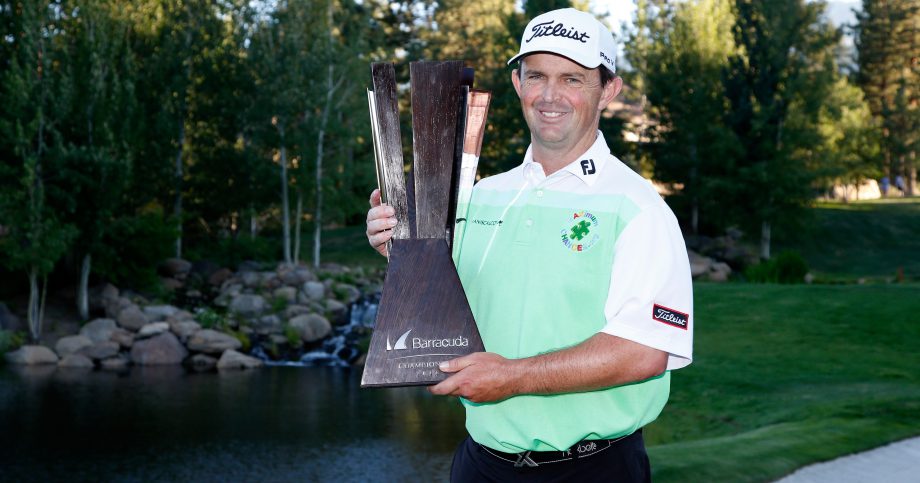 RENO, Nev. – Greg Chalmers won the Barracuda Championship on Sunday at Montreux for his first PGA Tour title, eagling the final hole for a six-point victory in the modified Stableford scoring event.

The 42-year-old Australian won in his 386th start after entering the week as the active player with the most events without a victory.

“It’s hard to win and I’m very thrilled and very pleased to get it done,” Chalmers said. “It was a tough. I knew today would be difficult. And we had difficult conditions. I was blessed, I think, that guys found it tough just the same as I found it tough.”

A point ahead of Gary Woodland and needing at least a par on the par-5 18th to wrap up the victory, Chalmers made an 8-foot eagle putt after hitting a 320-yard drive and 230-yard, 7-iron approach. A few minutes earlier, Woodland hit an 8-iron into the right bunker and three-putted for bogey.

“Quite fortunate that Gary didn’t birdie the last,” Chalmers said. “That would have put a lot of pressure on me.”

Chalmers had a four-point round to finish with 43 in the system that awards eight points for double eagle, five for eagle, two for birdie and deducts a point for bogey and three for double bogey or worse. He also had two birdies and five bogeys, the last two on Nos. 15 and 17.

The left-hander earned a two-year tour exemption, a spot in the British Open at Royal Troon and other perks. With only conditional status, he had split time between the tour and the Web.com Tour this year. The two-time Australian Open champion missed the cuts in his previous five starts on the big tour.

“Just to get back on the PGA Tour. I can’t tell you how exciting that is,” Chalmers said. “Forty-two years of age, I turn 43 in October. This is a real fork in the road for my career, and it’s in the right direction.”

Because of the West Virginia floods that led to The Greenbrier Classic being cancelled, a British Open spot was transferred to the leading player not already eligible at Montreux.

“Can’t wait,” Chalmers said. “It’s such a great thing that the R&A and Barracuda here have done for us, even though the circumstances that came about weren’t the greatest.”

Woodland, the 2013 winner, also had a four-point round to finish second.

“It’s frustrating,” Woodland said. “I didn’t make any putts coming down the stretch.”

In standard scoring, Chalmers finished a stroke ahead of Woodland and third-place finisher Colt Knost, closing with a 1-over 73 for a 15-under total.

Knost had a 10-point round to reach 35. He has three top-four finishes in his last five events.

“I stole some today, but I threw a lot away,” Knost said. “Honestly, all week I just didn’t strike it very well. My short game saved me.”

Tim Herron was another point back after a 13-point round. He was pulling for Chalmers to win.

“That would be great. That would be awesome,” the 46-year-old Herron said while Chalmers was in the middle of the back nine. “He’s grinding his butt off. We’re kind of in that stage of our career – should we hang with the family or should we keep going?”

Brendan Steele and Steve Wheatcroft tied for fifth with 32 points.

“Not the Sunday I wanted,” Wheatcroft said. “They definitely changed the golf course up on us. Took us four or five holes to figure that out. Can’t imagine too much water went on the greens last night. They were rock hard.”

Rhein Gibson had the shot of the week, holing out from 175 yards for double eagle on the par-5 18th. He set up the albatross with a 370-yard drive.

“I hadn’t had a birdie all day and just leaking oil, hitting good shots, not doing anything,” Gibson said. “I hit an unbelievable tee shot there, and had a wedge in. … Saw it go in. The crowd went pretty bonkers.”

Barracuda will donate $100,000 to a charity in Gibson’s name. The only other albatross in tournament history was by Shiv Kapur in 2010, when the hole played as No. 9.

Gibson tied for 25th with 24 points. He and other Australian players showered Chalmers with champagne.

“I didn’t expect that,” Chalmers said. “And kind of unique, because normally a lot of guys will just leave town. So, for them to stay and do that was kind of special.”

Chalmers’ father, John, also was there to celebrate.

“My father just comes out to travel with me when my mom and my kids and my family are staying back in Dallas,” Chalmers said. “He just likes to come out and watch golf. He plays. It’s good for us as father and son – he’s 72 now – for us just to bond and chat and solve the world’s problems every night.”

Chalmers got the last laugh on a Twitter troll, too.

“Unfortunately, someone on Twitter said, ‘That guy can’t close out.’ … I’ll be tweeting him back later, don’t worry about that.”