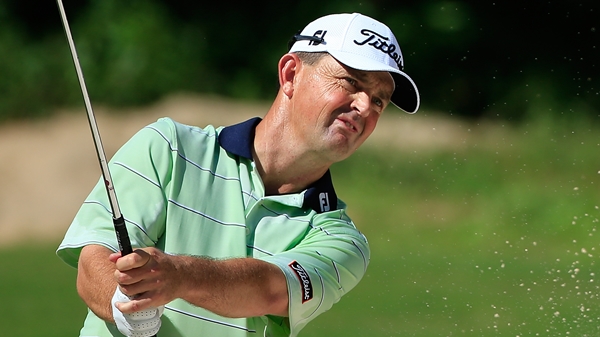 DAVIDSON, N.C. – Greg Chalmers birdied two of the last four holes for a 5-under 67 and a one-stroke lead Saturday in the Chiquita Classic, the second of four events in the Web.com Tour Finals.

Chalmers, the 40-year-old Australian who finished 132nd in the PGA Tour’s FedEx Cup standings, had a 15-under 201 total at River Run. He had eight birdies and three bogeys in the third round.

“It’s kind of new to me, I guess,” Chalmers said. “To be honest, I can’t tell you the last time I led going into Sunday and I’ve been playing as a pro for 20 years. … I just want to experience it and do it. I think if you want to eventually be successful on the PGA Tour you’ve got to get used to dealing with these kinds of things and being in the fishbowl of the last group or the guy that’s leading the tournament. Every experience is new and we’re going to find out a couple of things about me tomorrow.”

Nos. 126-200 in the FedEx Cup standings and Nos. 26-75 from the Web.com Tour’s regular-season money list playing for 25 PGA Tour cards based on their earnings in the four tournaments.

The top 25 players on the Web.com money list have already earned PGA Tour cards. They are competing against each other for PGA Tour priority, with regular-season earnings counting in their totals and the final leader getting a spot in The Players Championship.

Canada’s Adam Hadwin, the first-round leader after a course-record 63, was second after a 67. He finished fourth on Web.com Tour money list to wrap up a PGA Tour card.

“It was a great round,” said Hadwin, the Chile Classic winner in March. “One bogey on a Saturday on moving day to put myself in good position. I got a little out of rhythm on the back. I had two real good looks at birdie there on 14 and 16, but I just didn’t hit them hard enough.”

John Peterson was another stroke back after a 68. He was 179th in the FedEx Cup standings.

Derek Fathauer, the second-round leader, had a 75 to drop into a tie for 15th at 9 under. He was 12th on the Web.com money list.