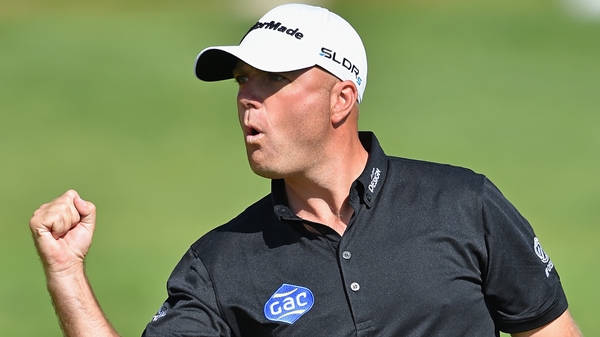 CRANS-MONTANA, Switzerland – Graeme Storm of England fired a hole-in-one in his third round 6-under 64 to lead the European Masters on Saturday.

Storm’s 16-under total of 194 was one stroke clear of Englishman Tommy Fleetwood, who shot 63 on the sunbathed, 6,848-yard Severiano Ballesteros course.

Storm, who is 159th in the European Tour money list, currently does not own a car and earned a more modest prize for his previous hole-in-one in March at the Trophee Hassan II in Morocco.

“There is a big difference between a lamp and a car like that,” said the 36-year-old Storm, whose only career win was seven years ago.

Brooks Koepka of the United States trailed Storm by two after making double-bogey on the par-4 18th, his only dropped shots in a 66.

Another American, David Lipsky, shot 66 to be three strokes off the lead in fourth.

Ryder Cup rookie Jamie Donaldson of Wales was a further stroke back, losing the lead after triple- and double-bogeys on par-4s coming home.

“A couple of bad shots cost me really,” said Donaldson, noting that a four-shot deficit can be quickly made up in thin Swiss Alps air. “Definitely. I haven’t really had a really low (round) yet.”

Joining Donaldson on 12 under were overnight leader Richie Ramsay of Scotland and Tyrrell Hatton of England.

Ramsay, the 2012 champion, shot a level-par 70 after bogeying three of the first four holes, and Hatton had two eagle-3s in his 5-under 65.

Dubuisson is among four players on 10 under, including Italian Marco Crespi whose bogey-free 62 tied for lowest score of the day.