Graeme McDowell makes a special return to Pebble Beach, this time with his father 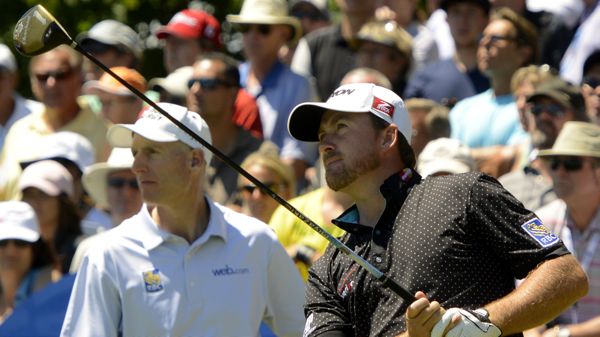 PEBBLE BEACH, Calif. — Graeme McDowell twisted his back and swung a club to loosen his joints in the morning chill of February at Pebble Beach, a course that looked nothing like he remembered it.

“I was a little more warmed up the last time I played here,” he said.

The first fairway, once lined with thousands of fans, was empty on this day. The putting surfaces were emerald green. McDowell recalls them being closer to brown. That was the U.S. Open, his first major. This is the AT&T Pebble Beach National Pro-am.

For three years, McDowell had little incentive to return to the scene of his greatest individual feat.

“It’s not going to get any better than how it felt last time I was here,” McDowell said. “It was pretty tough to top the experience that weekend — the emotions, my dad, winning my first major championship. Doesn’t get any better than that. So I really wasn’t in a rush to come back.”

He found two good reasons to return, starting with the silver-haired man who joined him on the tee with a smile bigger than Stillwater Cove.

Kenny McDowell walked at least 108 holes the week of the 2010 U.S. Open, which included two practice rounds. McDowell’s father was on the 18th green after the final shot, embracing him as he said “You’re something, kid.”

They are partners this week, a treat for both of them.

“Being here brings it all back,” the father said. “Being able to play in the tournament, it’s a dream come true. I don’t think I’ll be able to do it justice, but I’ll be trying.”

Kenny McDowell has a handicap index of 12. He was never a great golfer, just a great father for an aspiring golfer. McDowell recalls his father organizing tournaments for the kids at Portrush, driving them across Ireland for competitions. He was involved in golf without knowing enough about the swing to meddle.

He talked about the long summer days when his son would sneak onto Portrush and play into the darkness.

“We used to have to go looking for him,” Kenny McDowell said. “My wife would say, ‘He could be playing golf at night.’ I said, ‘I’ll tell you exactly where they are.’ I would drive out to the car park. There’s a big bush at the back of 17 green and the next thing you’d hear is, ‘I’m coming out.”’

They played together in the Dunhill Links Championship, a European Tour event in Scotland modeled after Pebble Beach. It doesn’t attract the kind of crowds expected for Saturday for all the celebrities. The McDowells are playing with Jason Bohn and actor Chris O’Donnell. Right behind them will be two-time Pebble winner Dustin Johnson with Wayne Gretzky (his future father-in-law), and John Daly with Kid Rock. In front of them will be actor Lucas Black and Kansas City Chiefs quarterback Alex Smith.

Peyton Manning was a late entry into the field, just a few days after a Super Bowl loss to Seattle. He played a practice round Wednesday with New England Patriots coach Bill Belichick, who will be playing with his own quarterback (Tom Brady) when the tournament starts Thursday.

Pebble Beach is serious business on Sunday, all about the celebrities on Saturday and plenty of fun leading up to that point.

For the McDowells, the week already got off to an ideal start.

They played San Francisco Golf Club, Cypress Point and Monterey Peninsula even before getting to Pebble Beach. There were memories on every hole, such as the shot into 8 feet on the par-3 fifth for his lone birdie of a brutal final round. Kenny McDowell couldn’t help but think of Dustin Johnson’s triple bogey as he walked up the second fairway.

“If that had been Graeme, I’d have been back in the bar,” he said.

The 18th was special, without being over the top. McDowell called it a “poignant moment,” though he didn’t want to get too wrapped up in the memory that he is defined by it.

“Emotionally, I don’t think that moment will be beaten in my career,” McDowell said. “But I’m not going to put Pebble up there on a pedestal and say, ‘That is the highlight of my career,’ because I want more. I want more Pebbles, I want more major championships, I want more things.

“So there’s a fine balance between getting too obsessed by it emotionally,” he said. “It’s fun to be out there and just reconnect a little bit with my thoughts and feelings that day.”

More than the ultimate Father-Son golf trip, McDowell has a big season ahead of him in a Ryder Cup year. He hasn’t played since the World Challenge two months ago. He typically starts his year at Riviera, a tough place to shake off the rust. Along with playing Pebble with his father, McDowell said it would be a good week to play without putting too much emphasis on results before heading into the meat of his season.

“At least by the end of the week, I’ll know where I’m at,” McDowell said.

Until then, he’ll have no trouble remembering where he is at Pebble Beach.