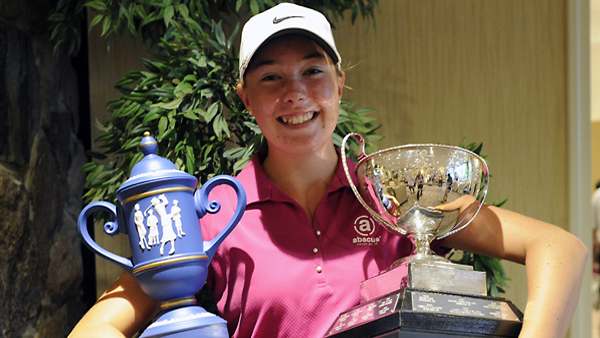 Thornhill, Ont. (Golf Canada) – Grace St-Germain carded four consecutive under-par rounds to claim the 2014 Canadian Junior Girls Championship at Thornhill Golf and Country Club. The 15-year-old showed poise over the final 18 holes, withstanding Team Canada Development Squad member Valérie Tanguay by firing a final round 1-under 71. The victory is the Ottawa native’s first national championship and comes on the heels of wins at the Quebec Women’s Amateur and Ontario Junior Girls Match-Play.“It feels great, it’s a great accomplishment and it’s an honour to have my name on that trophy,” St-Germain said following her round.St-Germain finished the championship as the only player under-par at 6-under 282 to claim both the Junior Girls and Juvenile division titles. Over 72 holes she carded 18 birdies to finish seven strokes ahead of Tanguay after rounds of 70-70-71-71. “This morning on the putting green, Reggie [GAO’s coach] just told me to just breathe and smile and you’ll be okay, so I just tried to breathe and smile,” she said about overcoming her final round nerves.With St-Germain’s win she also earns an exemption into the 2015 Canadian Women’s Amateur Championship and all three Canadian Women’s Tour stops next season. Tanguay of St-Hyacinthe, Que., battled with St-Germain on the opening nine, trading the lead back and forth before stumbling on the closing stretch. The 18-year-old struggled on the back-nine posting a 4-over 40 to finish in solo second at 1-over 289 after a final round 5-over 77.Thornhill’s Selena Costabile claimed solo third after a 3-over 75 to finish the championship at 3-over 291. Costabile also finished in second place in the Juvenile division, while Development Squad member Naomi Ko of Victoria carded a 2-under 70 to finish in fourth overall at 4-over 292.Courtney Tolton of Mitchell, Ont. rounded out the top-5 after a final round 1-under 71 to finish at 6-over for the championship.