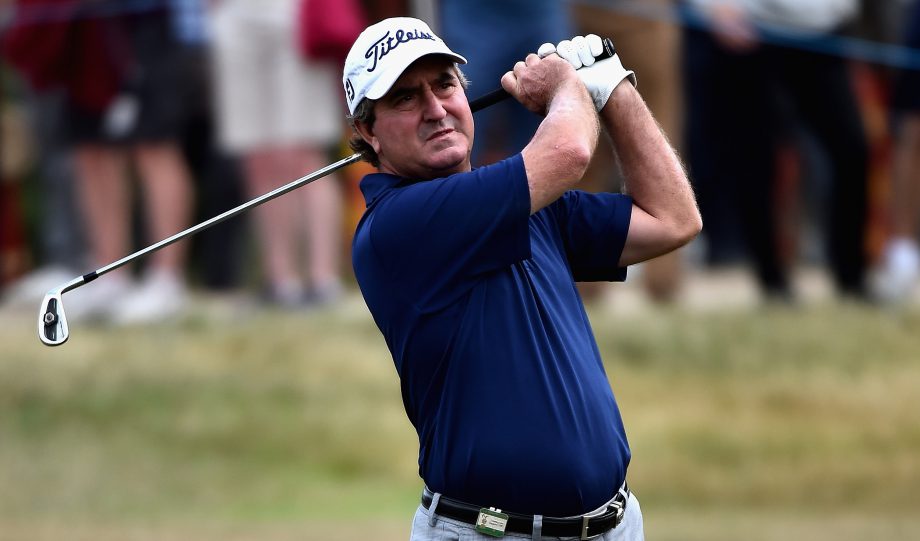 ENDICOTT, N.Y. – Before Gene Sauers entered the interview room at En-Joie Golf Club, he grinned as he looked at his round details.

On Friday, it was very good for him. Sauers shot a 6-under 66 to tie Paul Goydos for the first-round lead in the Champions Tour’s Dick’s Sporting Goods Open. John Huston, the tournament winner four years ago, was a stroke back along with Ian Woosnam.

Peter Senior, a late addition to the field, was another shot back and tied for fifth with Bob Friend, Steve Jones, Rod Spittle, Jeff Maggert, and Willie Wood, who won here in 2012. Defending champion Bernhard Langer had a 71.

John Cook was disqualified for signing an incorrect scorecard. He made an eight at No. 16 and signed for a seven.

Sauers had four birdies on the front nine and three on the back, his lone blemish on the day a bogey at the par-3 seventh when he drove into a greeenside bunker and couldn’t get up and down. He hit 11 of 14 fairways and 16 of 18 greens in regulation on the short and narrow tree-lined course. He rolled in a pair of 10-foot birdie putts that broke left to right at Nos. 13 and 17.

“I’ve always had trouble putting. Now, it’s the best part of my game,” he said.

The 53-year-old Sauers, winless on the Champions Tour, was the 54-hole leader at last year’s U.S. Senior Open at Oak Tree National. But he missed a 6-foot birdie putt on the final hole to fall into a playoff and lost to Colin Montgomerie. Still, he finished just inside the top 20 on the money list, his highest standing ever, compliments of three top-three finishes in his first five tournaments.

“I’ve been playing pretty well,” Sauers said. “I just haven’t got the job done. I just have to keep fighting.”

With his short game in top form, Goydos had four birdies on the front nine and another at No. 10 as he converted three putts inside 6 feet and two others within 6 inches. A 25-foot birdie putt at No. 17 forged a tie for the lead.

“From tee to green, I played as well as I have all year,” Goydos said. “It was a nice start.”

Huston, who is vying to become the first repeat winner of the event, had eight birdies, a bogey and a double bogey. Despite hitting just 7 of 14 fairways, Huston moved into contention with his play on the firm greens. He needed just 26 putts.

Michael Allen had four birdies in a five-hole span on the front nine and tacked on two more birdies on the first three holes along the back side to reach 5 under. A three-putt bogey at the par-4 11th hole began a slide, and Allen followed with bogeys at Nos. 14 and 15 to fall back into a tie for 11th at 3 under with Kevin Sutherland and eight other players.

Sutherland, who became the first player in Champions Tour history to shoot a 59 when he accomplished the feat here a year ago in the second round, had an up-and-down day with five birdies and two bogeys in 69.

The round was played under ideal partly cloudy conditions, with temperatures in the 70s and just the hint of a breeze. Kenny Perry said the 6,974-yard course was as firm as he’d ever seen it and predicted a bunch of low scores.

They just weren’t as low as expected. The first-round leader in each of the previous five Champions Tour tournaments at En-Joie shot 65.

“There’s always low rounds out there,” Sauers said. “You’ve just got to give yourself opportunities.”

Austin, who entered the tournament ranked ninth in points and has six top 10 finishes in 2015, had five bogeys and a double-bogey 6 along with two birdies as he hit only seven fairways. A year ago, he finished tied for second here with Allen.

Montgomerie, the Schwab Cup points leader, is not playing for a second straight week because of commitments in Europe, giving Maggert and Langer a chance to take over the top spot. Montgomerie has 2,873 points, Maggert 2,707 and Langer 2,604 in what has become a three-way competition with only four more events until the Schwab Cup Championship in November.