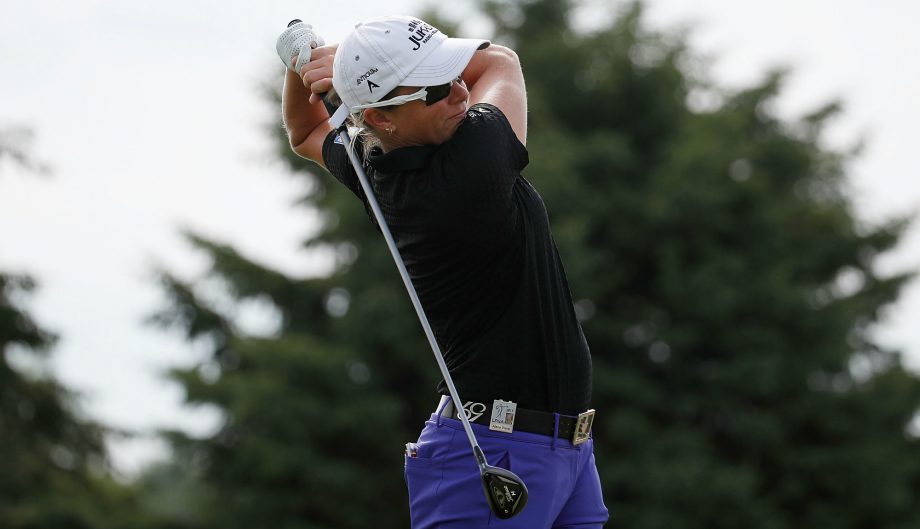 Belgian rookie Laura Gonzalez Escallon birdied three of the final four holes Thursday for a 7-under 65 and a share of the lead with Sei Young Kim in the Thornberry Creek LPGA Classic.

“The greens are playing soft, so you can be very aggressive,” Gonzalez Escallon said. “I think that helps with low scoring. It’s a really good course. Every hole is different. … It’s new for everyone, so I think rookies can really take advantage of that.”

Kim had eight birdies and a bogey at Thornberry Creek, the Oneida Nation-owned resort near Green Bay. The South Korean player won the Lorena Ochoa Match Play in May in Mexico for her sixth LPGA Tour victory.

“My shot solid today, and greens were softer, so I was able to go after the pins and give myself a lot of birdie opportunities,” Kim said. “And then putting was good. … It’s been a long time since I played well in the first round, so I’m very blessed to have shot 7 under.”

“Very steady,” the former Nebraska player said. “I hit just about every fairway and I think I might have hit every green for like the first time in my life, so that makes golf really easy, as it turns out.”

Fifth-ranked In Gee Chun and Moriya Jutanugarn topped the group at 67. Jutanugarn had seven birdies in an eight-hole stretch, then played the final eight in 2 over with bogeys on Nos. 11 and 17.

Suzann Pettersen had a 68.

“First time I saw it, I’m like, ‘Well, you’ve got to bring your diving gear because you’ve got to go deep around this place,”’ Pettersen said. “I mean, I just shot 4 under and feel like I shot 100. … The golf course is great. I think it’s great to see a golf course that kind of invites birdies and kind of low scores. I’m a little bit surprised nobody has torn it up more than 7 under because I felt like I played average and shot an easy 4 under.”

Jutangarn’s younger sister, second-ranked Ariya Jutanugarn, had a 78. The six-time LPGA Tour winner had a double bogey on the par-4 10th, five bogeys and one birdie.

Brooke Henderson, the 19-year-old from Smiths Falls, Ont., coming off a one-stroke loss to Danielle Kang on Sunday in the major KPMG Women’s PGA Championship at Olympia Fields in Illinois, opened with a 71.

Kang, top-ranked So Yeon Ryu, No. 3 Lexi Thompson and No. 4 Lydia Ko are among those taking the week off before the U.S. Women’s Open next week at Trump International in New Jersey.

“Last week took a lot out of me being in contention, especially in that last round,” Henderson said. “It drained a lot of energy, and I’m just trying to rebuild that this week. Take a little bit more rest and maybe not practice quite as much and rebuild my energy so that next week at the U.S. Open I can go strong and hopefully make it count.”

Hamilton’s Alena Sharp was the low Canadian, tied for fifth at 5-under 67. Samantha Richdale of Kelowna, B.C., was tied for 36th at 3-under 69. Augusta James of Bath, Ont., was tied with Henderson for 71st and Calgary’s Jennifer Ha was tied for 121st 2-over 74.