A great golf trip for the entire family 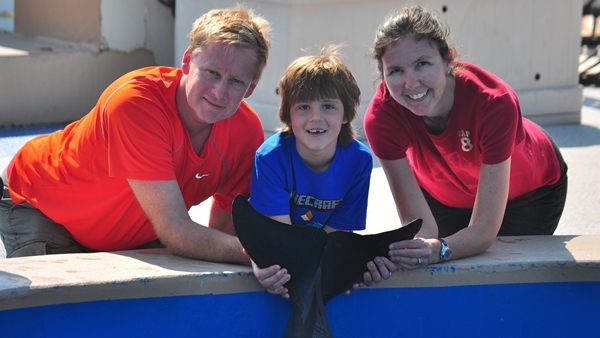 After spending last week hanging out with David Hearn, Graham DeLaet, Stephen Ames and Mike Weir at the Valspar Championship, it is back to the reality of the never ending winter in Ontario.

In our household, March Break has made for many interesting trips to sunny Florida for more than a decade and many wonderful days following several of my favourite golfers at Innisbrook Resort and Golf Club in Palm Harbour, just outside Tampa Bay. It’s a tournament that’s had so many sponsors over the years – EverBank, Transitions, PODs and Chrysler – that it’s difficult to keep count, but the fields are exceptionally strong and the crowds aren’t overwhelming.

For the past seven years we had flown directly to Tampa, but now that our son Jacob is nearly eight we decided to make the 22-hour road trip through New York State, Pennsylvania, Virginia, snowy West Virginia & North Carolina, South Carolina and Georgia to reach Florida.

Innisbrook is owned by Sheila Johnston, Founder and CEO of Salamander Hotels and Resorts, which oversees Grand Golf Resorts of Florida. So, we decided to investigate two of Innisbrook’s sister properties on our journey to Innisbrook and our date with Hearn, DeLaet and 150-plus PGA Tour players. The collection includes 1,250 luxurious villa-style accommodations and 162 holes of golf designed by Jack Nicklaus, Arnold Palmer, Tom Watson and Larry Packard that form the Legends of Golf Trail, which traverses 200 miles between the resorts and across the Sunshine State.

After two solid days packed into the SUV our spacious two-bedroom villa overlooking one of the two championship courses at Hammock Beach Resort was the perfect place to kick back and enjoy the sights and sounds of the neighbouring Atlantic Ocean.

No. 17 at Hammock Beach’s Ocean Course

We started our first day at the resort with some pool time. There were actually seven or eight pools, including the largest hot tub I’d ever seen, but, the lazy river, three-story waterslide, beach pool, and torrential waterfall were all big hits for Jacob. After three hours of that, it was time to play golf at Hammock Beach’s Ocean Course designed by Jack Nicklaus.

We played family golf for the first nine and then I scooted around the back nine on my own with the setting sun and Atlantic Ocean for a backdrop.  It was a great atmosphere for golf, as the all-championship design winds along pristine wetlands and sparkling lakes, but also plays six holes directly on the Atlantic Ocean.

The course concludes with a thrilling finale dubbed “The Bear Claw” — a collection of four daunting holes precariously edging the sweeping coastline. When I left my tee shot on the par-3 17th hole just three feet from the pin, it made for a spectacular birdie as the waves crashed along the shoreline behind the hole. Would have loved a few more ocean holes, but with the six bordering the Atlantic, that’s more than any other course in Florida and one of the main reasons it ranked among Golf Digest’s Top 100 Courses.

Day 2 at Hammock Beach featured a 15-minute morning drive to the resort’s sister course, The Conservatory Course. This was my first opportunity to play a Tom Watson designed layout and I couldn’t have asked for a better introduction than this 7,776-yard, par-72 layout – the longest in Florida. Definitely one of the toughest courses I have ever played with narrow rolling fairway landing areas, wild mounding and challenging bunkers at every turn. If I could have played just one of the two courses at Hammock Beach it would have been the inland Conservatory Course – definitely not your typical flat Florida layout.

No. 8 on the Conservatory Course at Hammock Beach

Then it was back to the hotel for more pool time with the family and an afternoon at Marineland Dolphin Adventure– just a 10-minute drive from the resort – where we learned about dolphins and had to opportunity to meet, touch and feed Ake, one of 14 dolphins who live at the center that was founded back in 1938. It’s great family fun and educational too!

We spent the next three nights in the Grand Hotel at Reunion Resort in Orlando, where I magically balanced two days at Walt Disney World and two rounds of golf on the outstanding Arnold Palmer and Tom Watson golf courses, leaving the third 18-hole championship course designed by Jack Nicklaus for a return visit and there definitely will be one.

Both courses are awesome with the Palmer Course offering hillier terrain and lots of fun shot-making opportunities, while the Watson Course appeared to have more sand, or maybe that was just the way I was playing that morning, but it’s a real beauty.

I loved the fact that the golf clubhouse is right next door to the hotel, so no hassles with shuttles and they also have junior rental sets with great green fee rates for kids. Also checked out ANNIKA ACADEMY with Jacob, which offers juniors an hour golf lesson for $20 each afternoon at 4 pm – a great deal!

Visiting Disney during March Break is crazy in a wonderful way. We spent one day at the Magic Kingdom including magical fireworks at 10 pm and a day at Epcot Center experiencing Soarin’ and Test Track. Jacob’s favourite ride – The Tomorrowland Speedway – provided an opportunity for him to drive a hotrod with me in the passenger seat.  I can hardly wait until he turns 16!

We then buckled up and headed south, where I spent three days at fabulous Innisbrook Resort watching the likes of Matt Kuchar, John Daly (that’s a story unto itself), Jim Furyk, Kyle Stanley, Luke Donald, Jason Dufner, Padraig Harrington, KJ Choi, Peter Uihlein, Spencer Levin, Retief Goosen, and many others tackle the outstanding Copperhead Course golf in the bright sunshine. It’s a course that remains on my golf course bucket list, although I have played two of the other three Larry Packard designed layouts on this massive property.

I totally enjoyed my time following Hearn and DeLaet, who finished tied for 10th and the rest of the pack including John Senden, who picked up the victory. Two or three years ago, Senden was hanging out at a  Geico putting challenge booth – one of his sponsors – during the tournament and Jacob took the challenge. Senden was great with all of the visitors that day and his signed postcard to Jacob still remains on his bedroom bulletin board – just one of our many great Florida memories.

On the way back home we passed a highway sign for Augusta, now wouldn’t that be a road trip in April!