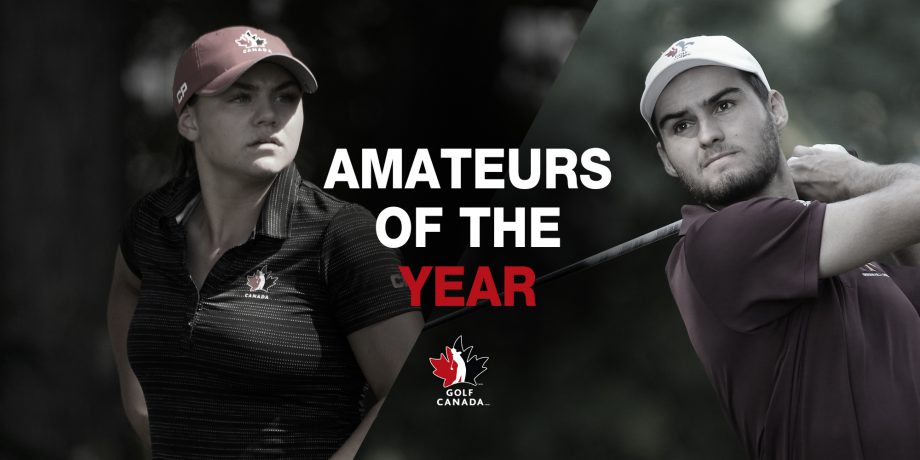 OAKVILLE, Ont. (Golf Canada) – Golf Canada is proud to announce the top finishers in the standings for its 2019 National Orders of Merit, a year that saw Québec-based golfers capture top honours in all four awarded categories, male and female in both amateur and junior golf.

On the amateur side, it is Réunion-Island born and Gatineau, Qué. resident Julien Sale, of Rivermead Golf Club, who claims top spot overall for the National Men’s Order of Merit. A senior at Arkansas State, Sale is ranked #160 on the World Amateur Golf Ranking (WAGR). The former Alexandre de Tunis and Québec Men’s Amateur champion built on an impressive 2018 season by qualifying for the 2019 U.S. Men’s Amateur and making it to the round of 32. He also finished T4 at the 2019 Canadian Men’s Amateur Championship.

The runner-up for the National Men’s Order of Merit is full-time NHL referee and Team Canada Amateur Squad veteran Garrett Rank of Elmira, Ont., who is currently the top ranked Canadian golfer on WAGR at #35. Rank had terrific results this season, notably winning the 2019 Western Amateur Championship, placing T5 at the Porter Cup, and finishing 2nd in the Canadian Men’s Mid-Amateur Championship.

2019 Team Canada Amateur Squad member Joey Savoie of La Prairie, Québec, was 3rd overall in the final men’s rankings. The Pinegrove Country Club member represented Canada at the Pan American Games in Lima, Peru, where he was part of a Canadian squad that captured the bronze medal in the mixed team event. Savoie also had notable performances in 2019 including a T6 finish at the Australian Master of the Amateurs Championship as well as quarterfinal finishes at the 2019 North & South Amateur and the 2019 NSW Amateur. Savoie also competed at the Mackenzie Tour PGA TOUR Canada Osprey Valley Open, placing T30.

After four straight years of domination for Ontario’s Maddie Szeryk, there is a new victor in the National Women’s Order of Merit for 2019: Brigitte Thibault. The Rosemère, Québec, native and Team Canada Amateur Squad member is presently a junior at Fresno State and made quite a splash at the NCAA level by notching eight top-15 finishes during her sophomore year. Thibault followed up by winning the 2019 Mountain West Championship. Thibault has also claimed the title of 2019 Ontario Women’s Amateur Champion, represented Canada at the inaugural Augusta National Women’s Amateur and was a part of the Pan American Games bronze-winning Canadian formation.

Runner-up behind Thibault for the National Women’s Order of Merit is Delta, B.C.’s Mary Parsons. The newly named member of the 2020 Team Canada Amateur Squad – and former Junior Squad member – is a junior at Indiana University who was crowned champion of the 2019 Lady Boilermaker (NCAA). Parsons’ 5th place finish was the highest individual finish for Team Canada at the Pan American Games, where she also claimed bronze as a member of the squad. Other notable results this year include a 4th place at the 2019 Women’s Porter Cup and a T3 result at the 2019 PNGA Women’s Amateur Championship.

Finishing third in the amateur women’s rankings was Madeline Marck-Sherk of Ridgeway, Ont. The Bridgewater Country Club member graduated from Florida Gulf Coast University in 2019. During her final year at FCGU, she notched five top-20 results in her nine starts as a senior. Marck-Sherk also had a T9 finish at the 2019 Ontario Women’s Amateur Championship.

#GolfCanada is proud to announce the top Canadian amateur golfers in the 2019 National Orders of Merit ??⛳️ – National Orders of Merit are used to identify and give recognition to top-performing amateur golfers from across #Canada. They also provide an objective national ranking system, enabling Canada’s top players to compare themselves to counterparts across the country. – #golf #golfstagram #amateurgolf #golflife

On the junior side, the Future Links, driven by Acura National Junior Order Merit winners and top finishers have also been announced.

In the boys’ division, Christopher Vandette of Beaconsfield, Qué. caps a sizzling year with the prestigious rank of #1 junior golfer in the nation. The 2018 and 2019 Team Canada Junior Squad standout has had a tremendous domestic season, claiming the 2019 Canadian Junior Boys title, in addition to a runner-up finish at the 2019 Québec Men’s Amateur Championship and a T3 result at the 2019 Future Links, driven by Acura Pacific Championship. A freshman at Kent State this year, Vandette has also had international success in 2019, finishing 3rd at the 2019 Toyota Junior Golf World Cup contested in Japan.

In the girl’s rankings, the Future Links, driven by Acura Junior Order of Merit winner for 2019 is Céleste Dao of Notre-Dame-de-l’Île-Perrot, Qué. The Georgia freshman, who was a member of the Team Canada Junior Girls Squad in 2018 and 2019, is claiming the honours for the third consecutive year. Dao qualified for the U.S. Women’s Open for the second year in a row this spring by clinching a local qualifier. She also registered significant results in a host of top competitions, finishing runner-up in the 2019 Canadian Junior Girls Championship, as well as 6th place finish at the 2019 Future Links, driven by Acura Pacific Championship and placing T12 at the AJGA Annika Invitational.

The 2020 National Order of Merit schedule and updated standings will be released in January 2020.

Golf Canada’s National Orders of Merit are used to identify and give recognition to top-performing amateur golfers from across Canada. They also provide an objective national ranking system, enabling Canada’s top players to compare themselves to counterparts across Canada.