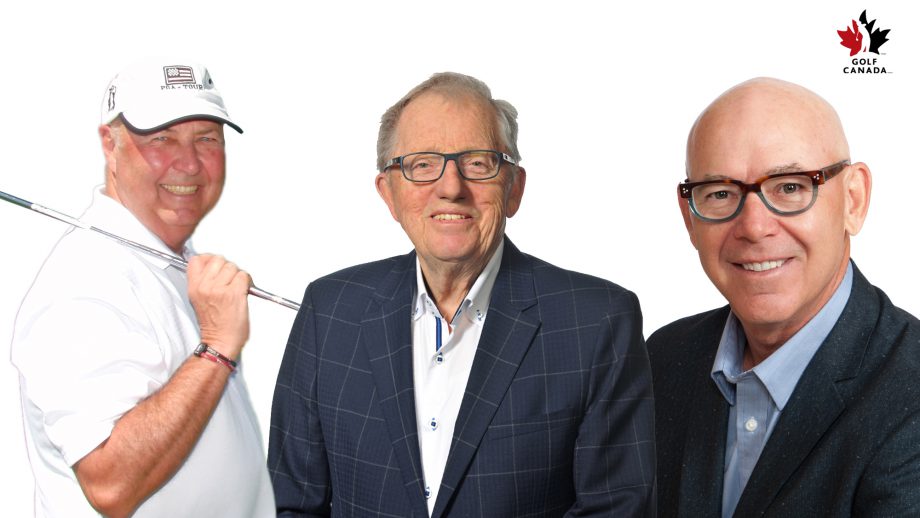 Dorval, Qué. (Golf Canada) – A trio of lifetime contributors the sport of golf – course owner and industry collaborator Raymond Gaudet, long-time volunteer and rules official Jean-Claude Gagné and acclaimed golf journalist Daniel Caza – will be acknowledged for their tremendous contributions to the sport as the 2019 recipients of Golf Canada’s Distinguished Service Award.

The presentation of the 2019 Distinguished Service Awards to Gaudet, Gagné and Caza will take place on Saturday, March 2 as part of Golf Canada’s Annual Meeting (February 28 to March 2) at the Marriott Montréal Airport In-Terminal Hotel in Dorval, Qué.

Gaudet is the founder of Club de Golf Montcalm, a 36-hole family owned and operated golf facility in Saint-Liguori, Qué. He is a founding member of Québec Golf Course Owners Association and was the driving force behind the formation of the Golf Association of Québec, an association comprised of club owners and managers, delegates of Golf Québec, club professionals, superintendents and other industry stakeholders.

Gagné has spent more than 30 years volunteering with Golf Canada and Golf Quebec. He is a long-time Rules official and French language translator who has supported the translation of materials for the Rules of Golf as well as Handicap and Course Rating.

Caza is a respected sports journalist who has chronicled the sport of golf in Quebec and nationally for more than 20 years. He is a lead golf contributor and the Editor and Chief with Ovation médias golf properties including Mongolf.ca, Revue Golf International, Golf Les Affaires and Guide Québec Golf as well as the golf television program “Au 19e” broadcast on RDS.

“Golf Canada is extremely proud to recognize Raymond Gaudet, Jean-Claude Gagné and Daniel Caza as the recipients of our 2019 Distinguished Service Award,” said Golf Canada CEO Laurence Applebaum. “Each of their respective contributions across various touchpoints in the game has left a meaningful impression on the Canadian and Quebec golf landscape. It is with great respect and admiration that we honour these individuals for their passion and commitment to our sport.”

Golf Canada’s Distinguished Service Award has been presented annually since 1993 to recognize individuals who have had an outstanding impact on Canadian golf either nationally or within their community.

Recipients of Golf Canada’s Distinguished Service Award are often selected from within the province or region of the organization’s incoming President. On Saturday, March 2, Charlie Beaulieu of Lorraine, Qué. will be sworn in as Golf Canada’s 115th president. As president-elect, Beaulieu will succeed Leslie Dunning of Calgary who served as President in 2018.

In addition to the presentation of the Distinguished Service Awards, Golf Canada will also recognize Raymonde Michaud of Rivière-du-Loup, QC as the 2018 Volunteer of the Year.

Michaud, Gaudet, Gagné and Caza will be honoured on Saturday, March 2 during the closing dinner of Golf Canada’s Annual Meeting.

Jean-Claude Gagné of Sherbrooke, Qué. has been a strong contributor to the game of golf both in Québec and at the national level for more than 30 years.

A long-time golfer and member of the Milby Golf Club, he has served as a volunteer and Rules of Golf official with Golf Canada and Golf Québec. Gagné has officiated at numerous amateur and professional golf championships over the course of his career in addition to serving as Tournament Chair or Rules Chair for various regional, provincial and national competitions, including the 2013 Canada Games held at his home club in Sherbrooke.

Gagné served on numerous Golf Canada committees during his volunteer tenure including Rules of Golf and Handicap (which he chaired from 2002 to 2005) and on the (former) Executive Committee for six years (2003-2009). A highlight of his volunteer experience included accompanying Team Canada in 2006 and 2007 as a Head Rules Official for the Toyota Junior Boys World Cup in Japan.

A past President of the Eastern Township Golf Association, his contributions provincially with Golf Québec spanned more than a decade where he supported various committees, served as Tournament Chair in 1998 and 1999, and was President of the Association in 2000. Gagné has also lent his expertise to Golf Canada over the years as a technical expert and French language translator supporting the Rules of Golf as well as Handicapping and Course Rating. In 2018, he contributed to a working group alongside past Golf Canada President Jacques Nols and current Golf Canada Rules Chair Diane Barabé in the full translation of the new Modernized Rules of Golf including publications and supporting materials which came into effect January 1, 2019. This year, he will apply his technical translation expertise to the French-language adaptation of materials and the Handicap Manual to support the global roll-out of the World Handicap System which comes into effect January 1, 2020. Gagné has also supported Golf Canada and Golf Québec in conducting numerous education and certification sessions related to the Rules of Golf as well as Handicap and Course Rating.

Raymond Gaudet’s contributions to the game of golf in Québec are rooted in two pillars—family and collaboration. Born in Saint-Liguori, Qué., Gaudet—a passionate golfer and former member at Club de Golf Joliette—was a practicing dentist for 42 years while making his mark in the golf industry. His entrepreneurial spirit in the 1970’s inspired him to build a golf course in his home village and in 1977, the opening nine of the now 36-hole Club de Golf Montcalm was designed by course architect John Watson.

The course became 18 holes in 1978, 27 holes in 1987 and then the final nine opened in 1991. Montcalm was, and remains to this day, a family business as his wife of 56 years, Evangeline, served as the General Manager of the club for 40 years. Today, his four children lead the business including son Claude who is President, General Manager and Superintendent; daughter Eve who is Food and Beverage Manager; son Sylvain who is Director of Golf; and son Robert-André who is Assistant Superintendent.

Gaudet, a trusted advisor in the Québec golf community, would go on to become one of the founding members of the APTGQ—the Québec Golf Course Owners Association. He would serve as the association’s second president, remained in office for seven years and would later participate in the founding of the Québec Golf Federation (QGF). Looking to give back to the sport he loved, Gaudet helped the QGF to launch the Maxi Golf Junior Circuit, a provincial tour aimed at developing young golfers in Québec.

A respected voice in the Québec golf industry and advocate for collaboration and industry cooperation, Gaudet was a driving force behind the formation of the Québec Golf Federation, an association comprised of club owners and managers, delegates of Golf Québec, club professionals, superintendents and other industry stakeholders. Although he retired in 2016 after more than 40 years leading Montcalm, Gaudet remains full of projects for the club.

Over the course of a distinguished media career, Daniel Caza has chronicled the sport of golf in Québec and nationally. He is a trusted voice in the Québec golf and sports media landscape. The Montreal native is an insightful commentator who is well respected by his peers and the golfing public, as well as club operators and golf industry stakeholders for his unique perspective on the Québec golf landscape.

Before becoming a golf writer, which he’s done for the past 20 years, Caza was contributing to prestigious media outlets such as La Presse Canadienne, Le Soleil daily newspaper and RDS covering the Montreal Canadiens and Montreal Expos as well as other major international events such as Formula One Grand Prix, boxing and tennis.

He joined Radio-Canada during the same period where he had the opportunity to be part of the broadcasting team covering the coverage of the Olympic Games in Atlanta and Nagano. Since 1999, he has worked almost exclusively in the golf industry—first with Transcontinental, then with Gesca and, finally, with Ovation médias. He has been a lead contributor to the golf division of the publishers mentioned, and currently serves as Editor-in-Chief of the MonGolf.ca platform.