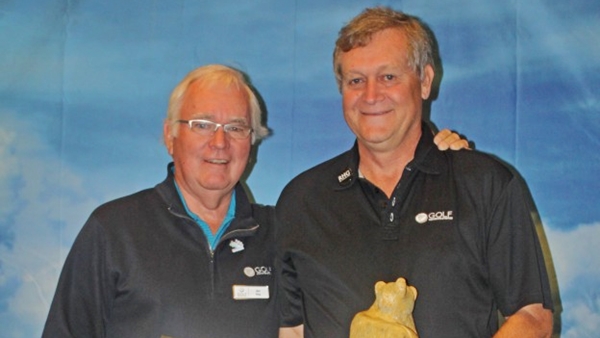 The GAO volunteer recognition program has been designed to recognize outstanding performance and contributions by volunteers who have played an instrumental role in promoting the growth and development of amateur golf throughout the province of Ontario while preserving the integrity and traditions of the game.

The Dick Grimm Distinguished Service Award is considered the highest honour recognizing individual service to the game of golf in Ontario. The award is named after Richard H. Grimm, who was affectionately known as “Mr. Canadian Open” for his service to the event from 1965 to 1993. Throughout his time in golf, he was known a masterful coordinator, promoter, official, fan, and – most importantly – passionate volunteer who put his heart and soul into making golf better. The GAO’s Dick Grimm Distinguished Service Award recognizes an individual’s meritorious service to the game of golf in Ontario as a volunteer. Recipients of this award embody the principles of integrity, dignity and commitment, which are central to the volunteer experience and to Mr. Grimm’s persona.

The 2014 recipient, Hamilton’s Ian Giles, has been involved with volunteering in golf for more than 40 years. From 1982-1989 he served as the Men’s Section President at his home club Chedoke Golf Club. During that time he acted as the Host Club Chair for the Ontario and Canadian Junior Boys’ Championship.  In 2001, Giles acted as the President of the Ontario Golf Association (OGA) and the next year helped lead the association through the amalgamation with the Ontario Ladies Golf Association.  Before becoming President, Giles spent six years as a Director on the OGA board chairing numerous committees including the Ontario Golf Hall of Fame committee in 2007 and 2008.

Giles went on to become a Governor with the Royal Canadian Golf Association (now Golf Canada), from 2003-2012, where he chaired many national Tournaments. In 2010, he achieved his certification as a level 4 rules official. Giles continues to serve the GAO as a site coordinator, senior rules official, rules official and tournament official as well as a member of the GAO Officials Development Committee.

Volunteer of the Year — John Turner

The GAO Volunteer of the Year Award has been designed to recognize and honour a GAO volunteer who has demonstrated outstanding performance and contributions while preserving the integrity and traditions of the game. This year the award is presented to Bayfield resident John Turner. Turner has been a volunteer with the GAO since 2008.  Turner joined the GAO already with many years of experience as an accomplished rules official and jumped into the role of senior rules official with the association.

Turner has been part of the GAO Board of Directors since 2010 and has served as the Officials Development Chair since 2013. He has also been part of the Finance, Sport and Membership committees. Turner has been active in setting professional standards for GAO officials. He has conducted weekly online educational seminars to help educate and prepare officials for certification or re-certification.

During the season, Turner can still be found at GAO and Golf Canada events as a rules official.

The District Volunteer of the Year Award has been designed to recognize those volunteers who embody the spirit of volunteerism and have shown dedication by making a significant contribution in promoting, supporting and expanding amateur golf within their district.

Kanata Resident and Greensmere Golf Club member Gerry Bower is the 2014 recipient of the award. Bower has been long-time member of Golf Canada and a GAO member for the past three. He became a rules official in 2007 and has served on the Ottawa Valley Golf Association (OVGA) Board as its Rules Committee Chair for the past five years.

During the winter, Bower conducts weekly Go To Meeting sessions in order to train and prepare the members of the OVGA Rules Committee for their various levels of exams.  He works an average of 25-30 days for the district alone on tournaments, plus provides support for the GAO qualifiers as a site coordinator/rules official and at championships as senior rules official. The last two years Bower has participated as a member of the GAO’s Officials Development Committee.

The Paul “Fitz” Fitzgerald Award is to recognize Ontario Course Raters that have demonstrated leadership and dedication to the promotion of the course rating system by achieving a combination of the following: completing courses on schedule, tending to extra rating requests, helping to train raters, attending a national course rating calibration seminar and/or instructing at a seminar.

This year, the award goes to Bob Heath. Heath a resident of Newmarket and member of the South Muskoka Curling and Golf Club, has been consistent in completing his schedule in a timely manner. He has always been willing to help, most recently by helping the Niagara team complete their schedule as well as provided additional training to their raters. In 2011, Heath helped train the Waterloo team, from scratch, and they are now one of the strongest rating teams in the province. Heath has attended the national course rating seminar on multiple occasions and presented several items at this year’s provincial seminar.

In addition to achieving all of the benchmarks, Heath has been instrumental in helping the GAO put together a Course Rater Certification Program. Heath has been a huge asset to the course-rating department for several years.

The “Len and Went Award” is presented annually to individuals who have achieved National (Level 4) Certification in the Rules of Golf. Achieving the level this year are: