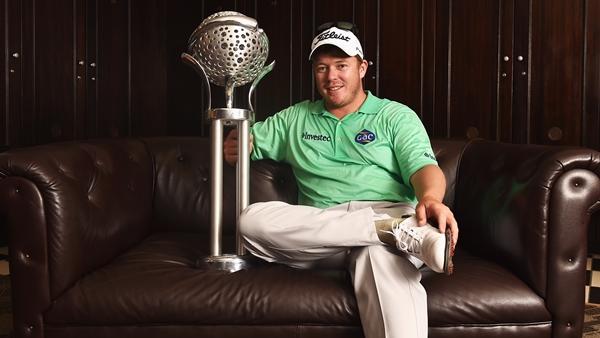 PRETORIA, South Africa – George Coetzee won the Tshwane Open on Sunday at the golf course he grew up playing on, making birdie on No. 17 to take the title by a shot from Jacques Blaauw.

Coetzee finished on 14-under 266 with his final-round 65 at the par-70 Pretoria Country Club, where he is a member. It was his second win on the European Tour following his Joburg Open victory last year.

Fellow South African Blaauw had a chance at his first European title with the clubhouse lead at 13 under after a course record-equaling 61 in the South African capital, with nine birdies and no dropped shots.

Blaauw made six birdies in seven holes around the turn to set a tough target.

But the Pretoria-born Coetzee, one of six players tied for the lead overnight, kept his nerve. Trying to drive the green on No. 17, he sent his tee shot into some trees. He chipped out to within five feet and made the decisive birdie, his fifth of the round.

That left him to par the last and triumph in front of family and friends at the club where he first won a junior tournament at the age of 10.

“It’s perfect playing my home course and winning this,” the 28-year-old Coetzee said. “I never thought as a kid that I would play a European Tour event at my home club.”

Coetzee was the first golfer in seven years to win a European Tour event at his home club, the tour said.

On a South African-dominated leaderboard, home players Dean Burmester and Tjaart van der Walt tied for third on 9 under with Scotland’s Craig Lee, the only non-South African in the top five.

New Europe Ryder Cup captain Darren Clarke, who has played all three European Tour events in South Africa in the last three weeks, carded 68-69 over the weekend to finish in a tie for 15th, his best result this year.