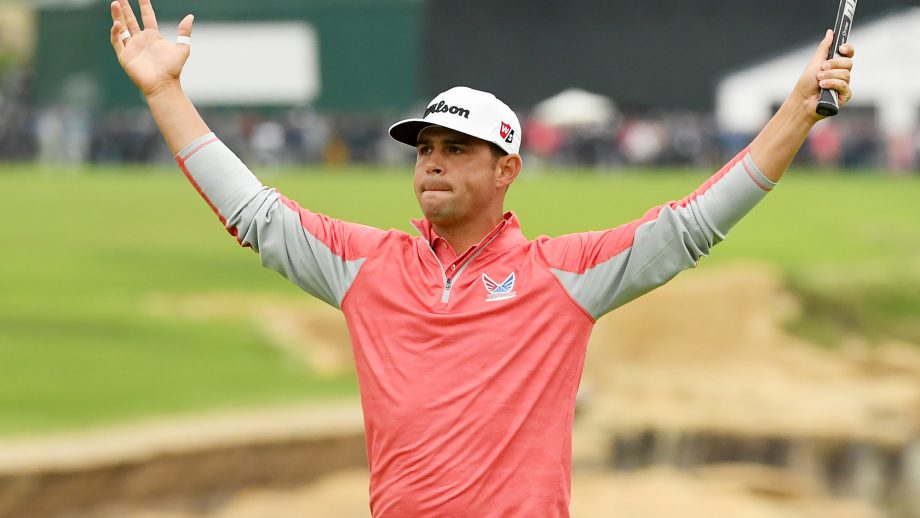 PEBBLE BEACH, Calif. – Gary Woodland denied Brooks Koepka’s bold bid at history with two clutch shots and made U.S. Open memories of his own, starting with that silver trophy in his hands at Pebble Beach.

Woodland finished in style Sunday. He holed a 30-foot birdie putt for a 2-under 69, giving him the lowest 72-hole score in six U.S. Opens at Pebble Beach and a three-shot victory over Koepka, who was going for a third straight U.S. Open.

Koepka had to settle for a footnote in history as the first player with all four rounds in the 60s at the U.S Open without winning. But he made Woodland earn every bit of his first major championship.

Clinging to a one-shot lead with more pressure than he has ever felt, Woodland seized control by going for the green on the par-5 14th hole with a 3-wood from 263 yards, narrowly clearing a cavernous bunker and setting up a simple up-and-down for a two-shot lead.

Even more significant was a shot from 90 feet.

Woodland hit the edge of the green on the par-3 17th all the way to the right, with the pin on the hourglass green on the other side.

Ahead on the 18th, Koepka’s 3-iron went just over the back of the green, leaving him a chip for eagle to tie, with a birdie likely to do the trick considering what Woodland faced. Koepka chipped to just inside 10 feet and missed the putt.

Woodland delivered again. Unable to use putter to get it close, he perfectly clipped a pitch over the mound, and it checked about 12 feet short of the hole and trickled down to tap-in range.

That effectively ended the U.S. Open. Woodland played conservatively down the 18th and made one last birdie that only mattered in the record book. He finished at 13-under 271, one shot better than Tiger Woods’ historic rout in 2000.

The difference was Woods won by 15 shots and was the only player under par. With a marine layer blocking the sunshine, and no significant wind at Pebble Beach all week, 31 players finished under par.

Koepka closed with a 68 for his second runner-up in the majors this year, along with his second straight PGA Championship title.

Justin Rose was the only one who caught Woodland, with a birdie on the opening hole. Rose bogeyed from the bunker on No. 2, and fell out of the race with three bogeys in a four-hole stretch on the back nine. He shot 74 and shared third with Xander Schauffele (67), Jon Rahm (68) and Chez Reavie (71).