Gary Woodland shoots 30 on front side at Masters 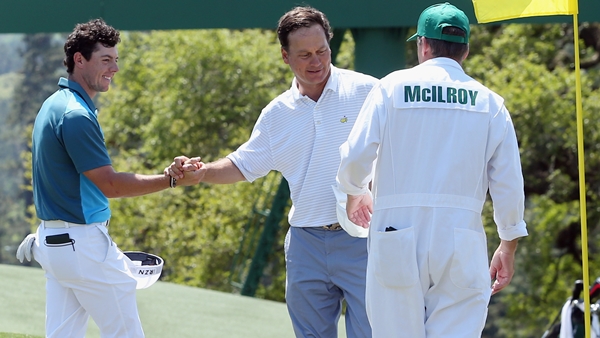 AUGUSTA, Ga. – With the leaders still waiting to tee off, Gary Woodland put on quite a show for the early arrivers at Augusta National.

The 29-year-old American had the patrons roaring on a Saturday morning with a 6-under 30 before the turn, matching the lowest score ever on the front side at the Masters.

Woodland became the first player since Phil Mickelson in the final round of the 2009 tournament to shoot 30 on the first nine holes. The only others to do it were K.J. Choi in 2004, Greg Norman in 1988 and Johnny Miller in 1975.

Unfortunately for Woodland, he ran into trouble in Amen Corner.

After another birdie at the 10th pushed his overall score to 4 under – just three shots behind 36-hole leader Bubba Watson – Woodland bogeyed the 11th and knocked it into Rae’s Creek at No. 12 for a double-bogey.

He bounced back with his sixth birdie of the round at the par-5 13th, pushing him to 2 under on a warm day with no hint of swirling breezes that can make Augusta National so treacherous.

Miguel Angel Jimenez, who became eligible for the Champions Tour when he turned 50 in January, was tied with Woodland at 2 under. The Spaniard shot 34 on the front side and took his score on the day to 5 under with three more birdies through the 14th.

Watson, looking to win his second Masters in three years, posted two rounds in the 60s for a 7-under 137 total, giving him a three-shot lead over Australian John Senden.

It was the largest 36-hole advantage since Chad Campbell went to the weekend up by three shots in 2006.

Defending champion Adam Scott was among the group four shots back, joined by Thomas Bjorn of Denmark, Jonas Blixt of Sweden, and Jordan Spieth, a 20-year-old Texan who was hardly playing like an Augusta rookie.

But early on, the day belonged to Woodland.

He got off to a blistering start with a birdie at the first hole and an eagle at the par 5 second. On the par-3 sixth, he stuck his tee shot left of the flag and let it funnel down to about 15 feet from the cup. He rapped in the putt for another birdie.

Booming drives and short wedges left him with easy birdies at the ninth (a 4-footer) and 10th (from just 2 feet away). At that point, a huge gallery had hooked up with Woodland’s group, the buzz quickly spreading around Augusta National that he was just three shots behind Watson and tied for second with Senden.

Alas, the run ended when a tepid chip from behind the green at the 11th led to Woodland’s first bogey. Still shaken from that flub, he made an even bigger mistake with his tee shot at the 12th, the ball rolling back into the water. A pitch barely stayed on the edge of the green, and Woodland had to settle for a 5.