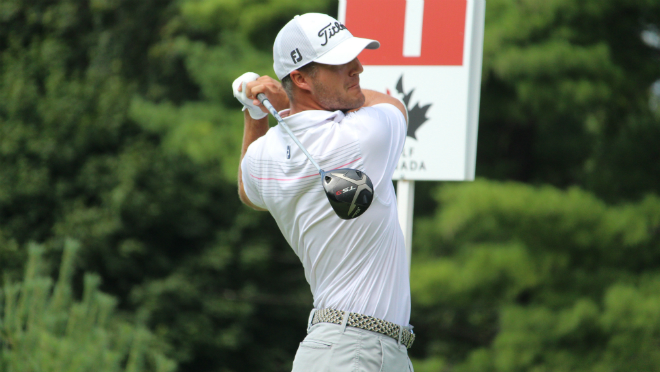 RICHMOND HILL, Ont. – Garrett Rank of Elmira, Ont., carded a 5-under-par 66 to lead after the opening round at the 33rd Canadian Men’s Mid-Amateur Championship, held at Summit Golf Club on Tuesday.

Rank made six birdies in the round while overcoming a one-stroke penalty he incurred when he hit his ball out of bounds. The lone blemish for Rank was a bogey on the par-4 6th. He holds a one-stroke lead over Ryan Sevigny of Ottawa.

“I played really well,” said Rank. “That one-stroke penalty was the mistake of the day. It could have been a really special round. My short game was awesome – I hit a lot of pitches from around the green. Whenever I missed the green, I was able to get it up-and-down stress-free.”

The 31-year-old NHL linesman is a past champion at the event, having won three years in a row from 2014 to 2016. Rank led the 2018 Canadian Men’s Mid-Amateur Championship after the first round (also with a score of 5 under), ultimately finishing in a tie for third.

“Maybe I’m a little more confident with the successes I’ve had this summer,” said Rank when asked about being in a similar position to last year. “Overall I’m just sticking to what I’m doing and adding them up at the end of the week and seeing where I’m at.”

Rank is looking to cap off a remarkable season. The former Team Canada member became the first Canadian in 42 years to win the prestigious Western Amateur Championship earlier in August and played the 2019 U.S. Amateur.

Sevigny also made six birdies and would have been tied atop the leaderboard had he not missed a short par putt on the 18th hole. Sevigny sits at 4 under 67 after the first round.

“I played the front-nine very steady,” said Sevigny. “Everything was solid. I wouldn’t say any one part of my game was amazing, but I felt very in control and I like the way the course is playing. I’m super satisfied and happy. I felt like I played much better than a 67, but I’ll take it.”

Defending champion Joseph Deraney (Belden, Miss.) is tied for third at 1 under. Deraney made three front-nine birdies and is four strokes behind Rank, tied with David Lang of Toronto and Cameron Dunning of Calgary

There is a three-way tie for the lead in the 40-and-over Mid-Master division between Dwight Reinhart (Ottawa), Derek Meinhart (Mattoon, Ill.), and Mike Dinner (Burlington, Ont.). All three players sit at even-par after 18 holes.

Team Québec leads the 36-hole inter-provincial competition at the conclusion of the opening round. The trio of Sevigny, Noah Norton (Kahnawake, Que.) and Patrick Godin (Saint-Clet, Que.) combined to shoot 1 under, leading the field by two strokes.

Team Ontario is in second place at 1 over and Team Manitoba is in third at 3 over. The inter-provincial team champion will be crowned Wednesday, at the conclusion of the second round.

In addition to the Canadian Men’s Mid-Amateur title, the 2019 champion will receive an exemption into the 2020 RBC Canadian Open at St. George’s Golf and Country Club in Toronto.