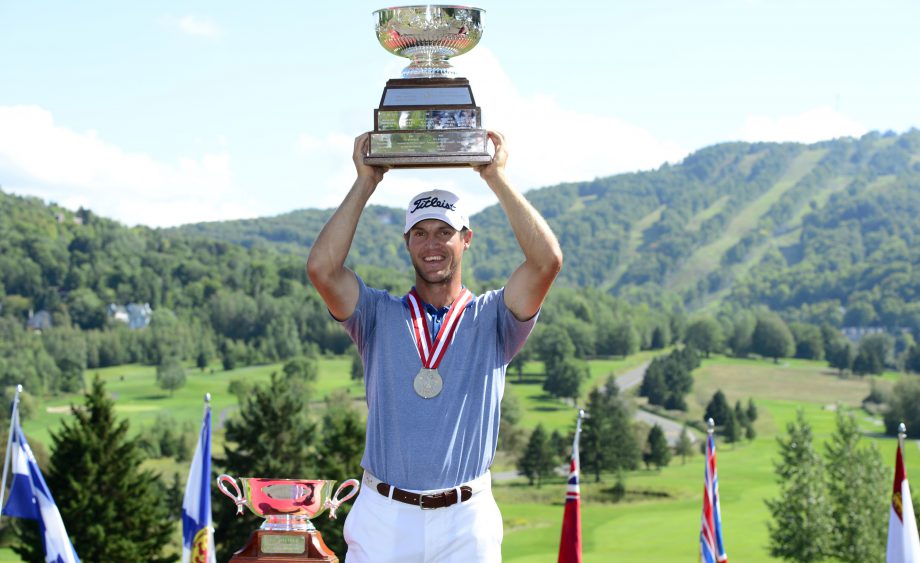 The product of Elmira, Ont., surged up the leaderboard, beginning with a 7-under 65 showing on moving day. That momentum carried into the final round of competition with Rank carding three birdies on the front nine to quickly separate himself from third-round co-leader Jordan Irwin.

“I got off to another nice start,” said Rank. “I hit a close shot on 6 and missed a three-footer for eagle which would have been a dream. I got a little sloppy through 8 and 9, but started to play really well again on the back nine – great last two days.”

The 28-year-old NHL referee bogeyed the 8th hole, but rebounded with four birdies across the back nine en route to a 5-under 67. The win is Rank’s third Canadian Men’s Mid-Amateur victory in as many years, and it has earned him an exemption into the 2017 RBC Canadian Open hosted by Glen Abbey Golf Club in Oakville, Ont., from July 24 to 30.

“It’s always special winning a national championship and to win it three times in a row is a huge honour,” said the Team Canada National Amateur Squad alumnus. “My goal for this week was to come here and win and get back into the [RBC] Canadian Open and I accomplished that. No matter the score, no matter what happened this week, I’m really pleased with how it went. I’m happy to be a national champion again and get the privilege of playing in the Open.”

Rank finished with a T77 result at the 2016 edition of the RBC Canadian Open at Glen Abbey.

Ryan Sevigny of Stittsville, Ont., who began the day in a tie for 15th, shot 8-under 64 to match Golf Château-Bromont’s course record and catapult into a share of second. The 27-year-old carded seven birdies across his first 16 holes before an eagle on the par-5 17th moved Sevigny into the runner-up position alongside 54-hole leader Jordan Irwin.

Irwin of Banff, Alta., made consecutive bogeys on his first two holes, but birdied Nos. 6 and 9 to move within two strokes of Rank heading into the turn. Despite an additional birdie on the final stretch, the 2016 Alberta Men’s Mid-Amateur champion finished at 13-under 275.

Rob Couture made a push for the Mid-Amateur title after matching the course record during the third round of competition. The 41-year-old was 2-over through his first 15 holes, but a trio of birdies to end the day earned the Dallas native the 40-and-over Mid-Master title at 8-under 280.

Three-time Canadian Men’s Mid-Amateur champion Dave Bunker of Woodbridge, Ont., looked to reclaim his 2015 Mid-Master title after leading the division through 54-holes, but was disqualified for signing the wrong score card.

Matthew Sim (Oakville), Ryan Kings (Kitchener) and Charles Fitzsimmons (London) combined to finish 15-under 273 in the inter-provincial team competition – contested over the first 36-holes – to claim a second consecutive victory for Ontario.