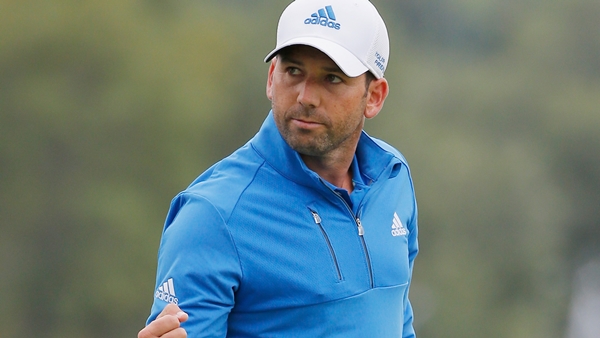 CHERRY HILLS VILLAGE, Colo. – Sergio Garcia hit great shots that led to eagle, birdie and par Friday. They carried him to a 6-under 64, giving him a one-shot lead going into the weekend at the BMW Championship on ever-changing Cherry Hills.

Garcia holed out from a greenside bunker for birdie on the second hole. He holed a lob wedge for eagle on the short, par-4 seventh hole. And after hitting into the water going for the green on the par-5 17th hole, he escaped with par by getting up-and-down with a wedge to a foot.

He needed them all.

Ryan Palmer also made eagle with a short wedge on the seventh hole, and he finished birdie-birdie for a 64 to end up a shot behind.

Rory McIlroy made three straight birdies late in his round and left his last putt on the edge of the cup. The late surge gave the world’s No. 1 player another 67 and put him two shots behind. Billy Horschel, a runner-up last week at the TPC Boston, had a 66 and was tied with McIlroy.

Barring a charge that would make even Arnold Palmer proud, Phil Mickelson is playing his last PGA Tour event of the season. He twice hit into the water – making a triple bogey on the par-3 12th and a bogey on the 17th – and shot a 76. Mickelson, who needs to finish about fourth to qualify for the Tour Championship, was 14 shots behind and in a tie for 63rd in the 68-man field.

Jason Day withdrew on the ninth hole with a back injury and said he would try to be ready for the Tour Championship.

The only peculiar part of Garcia’s day was his left ear. He was on the sixth green when he felt a series of beeps, followed by a “pop” that made him feel uncomfortable for about the next hour before it finally went away. He’s not sure what it was. He’s not sure there’s a word for it in Spanish.

“It’s happened before, but usually I kind of blow it and it gets back,” Garcia said. “But for some reason, it just didn’t feel quite the same. And it still doesn’t, but it’s definitely better. It shouldn’t be too big of a deal.”

But it clearly didn’t affect his golf.

“Obviously, it helped, because then I made 2 on the next hole,” he said with a laugh.

The turnaround came at the end of his round. He went for the green in two on the 17th and came up well short. With the tough 18th ahead of him, it looked as though he would lose his lead and perhaps even more ground. But he hit wedge to tap-in range for his par, and then made one only six birdies on the closing hole at Cherry Hills.

“It’s only Friday, so we still have two days to go,” he said. “But it definitely helped my frame of mind going into the 18th tee, which today was playing quite hard. So it was nice to be able to get that up-and-down and then play 18 really well.”

Masters champion Bubba Watson had no trouble with the water on the 17th. He has taken on the cross bunkers both days with his driver, leaving him only an 8-iron Thursday and a 9-iron Friday. He made eagle the second time, shot 66 and was in the group at 4-under 136 that included Graham DeLaet of Canada and Hideki Matsuyama, who came into the week at No. 30 in the FedEx Cup.

The top 30 advance to the Tour Championship for a shot at the $10 million bonus.

Palmer has been showing up on leaderboards over the last month – share of the first-round lead at the PGA Championship and an opening 63 last week in Boston. He thought the greens might be softer because of the rain, and he was right. Palmer saw a few approach shots on No. 1 and told his caddie the course would be there for the taking.

He waited until the end to grab it with four birdies in his last five holes.

“It was a great way to finish,” he said. “I was glad I was one of the ones that shot low.”

He shot the same score and felt entirely different – finishing with two late bogeys one day, three late birdies the next.

“I feel much better coming off the golf course because I birdied three of the last four holes,” McIlroy said. “I sort of struggled to get anything going today. It was a little cooler, so the ball wasn’t going quite as far, a little bit of wind … even though the course was softer, it still played pretty tough.”