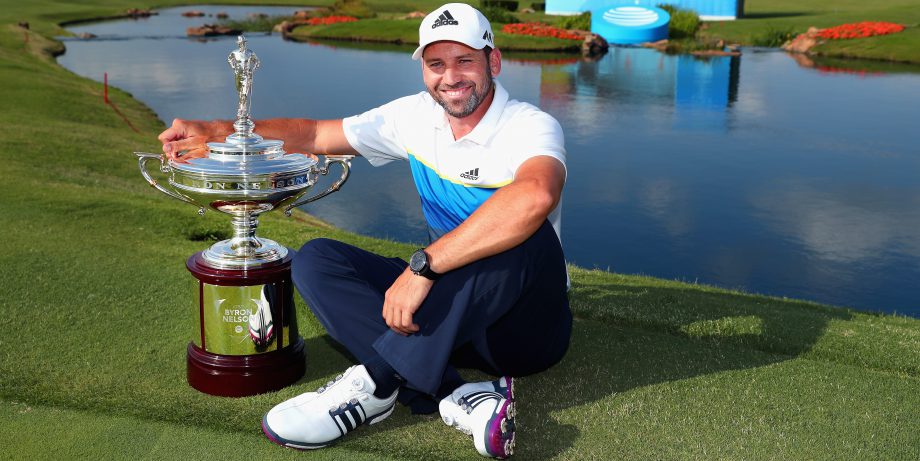 IRVING, Texas – Sergio Garcia shot a 62 the first round he played at the Byron Nelson and tied for third as a 19-year-old kid in 1999. He won there five years later, again with Lord Byron watching.

With another win at the Nelson, Garcia matched Seve Ballesteros for the most PGA Tour victories by a Spanish-born player.

Garcia made a par on the first playoff hole Sunday to beat Brooks Koepka for his ninth career PGA Tour victory. He then touched the likeness of Nelson that tops the championship trophy and wiped away tears while sharing a moment with Peggy Nelson, the late golfer’s widow.

“I just said thanks for everything, that it was great to see her again,” Garcia said. “It’s been a very emotional week and obviously Peggy finished it off by making me cry, which I didn’t think I was going to do.”

The 36-year-old Spaniard overcame four bogeys, and two balls in the water on the back nine, for a 2-under 68 to get to 15-under 265. He was two groups ahead of the final pairing of hometown favourite Jordan Spieth and Koepka, who bogeyed the 14th and 15th holes and just missed a birdie chance at 18.

“To be up there with Seve, it means the world to me and I kind of – you can kind of say I went a little bit a la Seve today,” he said. “I definitely wasn’t driving the ball great until the end and a couple of iron shots here and there, but I was chipping and putting great. Some of his wins were like that and I’m very proud of it.”

Koepka, who started the day with a two-stroke lead over Spieth, was 17 under after his last birdies of the day, at Nos. 7 and 9. He shot 71.

When they went back to 413-yard 18th again for the playoff, Koepka went first and drove into the water before taking his drop and leaving his approach short of the green. Garcia hit a drive of more than 300 yards and followed with a wedge to about 17 feet.

“I drew it back into the wind. I was hoping it might hit the rocks,” Koepka said. “I really didn’t have much the last 36 holes. I had no idea where the ball was going.”

Garcia also won the 2004 Nelson and is the first two-time winner in the 34 tournaments since the event moved to TPC Four Seasons in 1983.

Matt Kuchar was a stroke out of the playoff at 14 under after a 65.

Spieth, the world’s No. 2-ranked player, had two bogeys in his first five holes Sunday and went on to shoot 74. He finished tied for 18th at 10 under.

“Just didn’t really get anything going and kind of stinks, given I had a chance here at a hometown event,” Spieth said.

Koepka hit each of his first two shots into the rough at the 14th and 15th holes. Those bogeys allowed Garcia to match the lead.

Even after his drive at No. 18 went into the right rough, Koepka still had a chance to win without a playoff when he made a nice shot to the green. But his 16-foot birdie chance curled just under the cup.

Garcia was 15 under for the third time in his final round when he made a short birdie putt after a nice chip shot at the par-5 16th. He had a pair of 12-foot birdie chances after that, but the ball stopped short at the par-3 17th and curled around the cup at No. 18.

In his 301st PGA Tour start, Garcia improved to 5-6 in playoffs and got a check for $1,314,000. Koepka was in his first playoff in his 55th tournament, a year after his only victory in the Phoenix Open.

Spieth first played in the Byron Nelson as a 16-year-old six years ago, when he tied for 16th – still his best finish in his six starts there. The Dallas native missed his high school graduation ceremony the following year after again making the cut there as an amateur.

Six weeks after his misery at the Masters, and a week after missing the cut at The Players Championship in his only other tournament since that blown five-stroke lead on the back nine when trying to win at Augusta for the second year in a row, Spieth was pretty much out of contention at home after his two early bogeys.

“Frustration, yeah,” Spieth said, describing how he felt. “I mean don’t go from the final group in second place alone and finish in 18th … there’s not many positives you’ll be able to take out of that other than the last hole I played I made birdie.”

That came on the same day that third-ranked Rory McIlroy won the Irish Open, his home tournament where he had struggled over the years.

AT&T, which sponsors the Nelson and Spieth, gave away 8,000 bobbleheads on Saturday. There were huge crowds watching his every move and his picture was plastered everywhere at TPC Four Seasons, but he had three bogeys in his first eight holes Sunday.