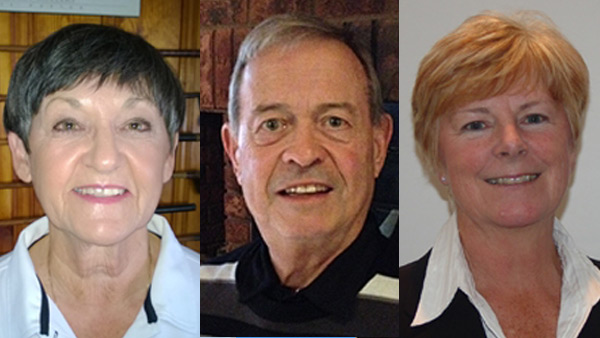 The GAO volunteer recognition program has been designed to recognize outstanding performance and contributions by volunteers who have played an instrumental role in promoting the growth and development of amateur golf throughout the province of Ontario while preserving the integrity and traditions of the game. The recipients will be formally recognized at the GAO Annual General Meeting, set to take place on January 25 at Peterborough Golf and Country Club.

Volunteer of the Year – Karen Newman

The GAO Volunteer of the Year Award has been designed to recognize and honour a GAO volunteer who has demonstrated outstanding performance and contributions while preserving the integrity and traditions of the game.

For the past six years, Collingwood resident Karen Newman has been a familiar face GAO at qualifiers and championships assisting with registration, starting and scoring. At the 2013 Investors Group Ontario Men’s Amateur Championship, Karen stepped up to take on the challenging role of volunteer chair, an integral part of the execution of the event. Traditionally, a major tournament of this size would have seen the tasks grouped into committees with a separate chair for each, but due to time restraints Karen managed the full team of over 70 volunteers. She skillfully recruited and scheduled members from her home club, Blue Mountain Golf and Country Club, OslerBrook, and neighboring golf clubs to make up a full team of volunteers. Throughout the championship, Karen was on-site ensuring the “blue team” of volunteers was successfully engaged.

Born and raised in Toronto, Karen was the longtime Director of Volunteers at the Credit Valley Hospital in Mississauga. A member at Blue Mountain for the past eight years, the grandmother to five started volunteering as an activity that she could share with her husband Pat, who is a GAO Rules Official.

By taking on the daunting task of managing a full team of volunteers for a major championship, Karen played a key role in the execution of the Ontario Amateur, the GAO’s biggest championship.

This award has been designed to recognize those volunteers who embody the spirit of volunteerism and have shown dedication by making a significant contribution in promoting, supporting and expanding amateur golf within their District.

Windsor resident and longtime Essex-Kent District Coordinator Bruce Rand first began volunteering with the Ontario Golf Association in the mid-1980’s, serving as club representative for Beach Grove Golf and Country Club. A former assistant pro at Beach Grove, Bruce started actively volunteering with the Essex Kent District as a starter and scorer before taking on the lead role of District Coordinator in 2001 when the GAO was established. He has been a vital link between the GAO and golfers in the Essex-Kent District, tirelessly promoting GAO initiatives and growing the game at the club, District and provincial level. Bruce was instrumental in bringing three GAO events to Beach Grove over the past two years, and continues to act as a starter and scorer at provincial events throughout the District. While leading the District Executive Committee and serving on Beach Grove’s golf committee, Bruce is a familiar face at functions and meetings throughout Essex-Kent providing information about GAO programs and encouraging golfers to get involved by participating or volunteering. In 2013, Bruce served as the Senior Tournament Official at the Investors Group Ontario Junior Boys’ Championship, one of the GAO’s major events.

This award is considered the highest honour recognizing individual service to the game of golf in Ontario. The award is named after Richard H. Grimm, who was affectionately known as “Mr. Canadian Open” for his service to the event from 1965 to 1993. Throughout his time in golf, he has been known a masterful coordinator, promoter, official, fan, and – most importantly – a passionate volunteer who put his heart and soul into making golf better. The GAO’s Dick Grimm Distinguished Service Award recognizes an individual’s meritorious service to the game of golf in Ontario as a volunteer. Recipients of this award embody the principles of integrity, dignity and commitment which are central to the volunteer experience and to Mr. Grimm’s persona.

For more than three decades, Thornhill’s Liz Hoffman has been an influential leader in Canadian sport, as an elite athlete, successful coach and widely-respected administrator. She joined the GAO Board of Directors in in 2007, bringing her extensive knowledge and experience to become a driving force within the Association as a volunteer and fervent supporter of junior development programs across the province.

Liz’s passion for golf developed at an early age, when she won the Ontario junior and Quebec amateur championships before becoming a member of the national team and participating in numerous amateur championships throughout the world.  While serving as the University of Toronto’s Director of Athletics, Liz joined the GAO as a volunteer and immediately became part of the Executive Committee as Vice President before assuming the role of President in 2009. Outside of those key roles, Liz has also lent her expertise to multiple GAO committees including Hall of Fame, Scholarship, Governance, and Finance, while also chairing the Sport Development Committee and becoming a familiar face as a tournament official at championships across Ontario.

Liz’s outstanding leadership skills and passion for the advancement of young athletes has been instrumental in the establishment of multiple new GAO initiatives to develop junior golfers. She has been influential in the launch of Junior Golf Development Centres, which provide developmental pathways and coaching support for juniors, while providing guidance in securing provincial grants to help fund new programs. She also serves as a link between the GAO and Golf Canada, where she is a member of the Board of Directors and numerous Golf Canada committees. A member at Thornhill Golf and Country Club, Liz has been highly involved with junior golf at the Club, the golf and greens committees, and is on Thornhill’s Board serving as Membership Director.

For more information about the Golf Association of Ontario’s Volunteer program, or to become a volunteer, please contact the GAO’s Coordinator of Volunteers Sandy Davidson at 905-852-1101 ext. 236 or sdavidson@gao.ca